By Gabriela Baczynska and John Chalmers BRUSSELS (Reuters) - The European Union should reverse its sanctions on Russia, Hungarian Prime Minister Viktor Orban told Reuters on Friday, as he pushed for a resumption of trade with Moscow and a European army that would restrain the Kremlin's might. Asked if the EU should impose new penalties on Russia over the poisoning of leading Kremlin critic Alexei Navalny, the nationalist Hungarian leader said: 'From the Hungarian point of view, we don't see why we should do that 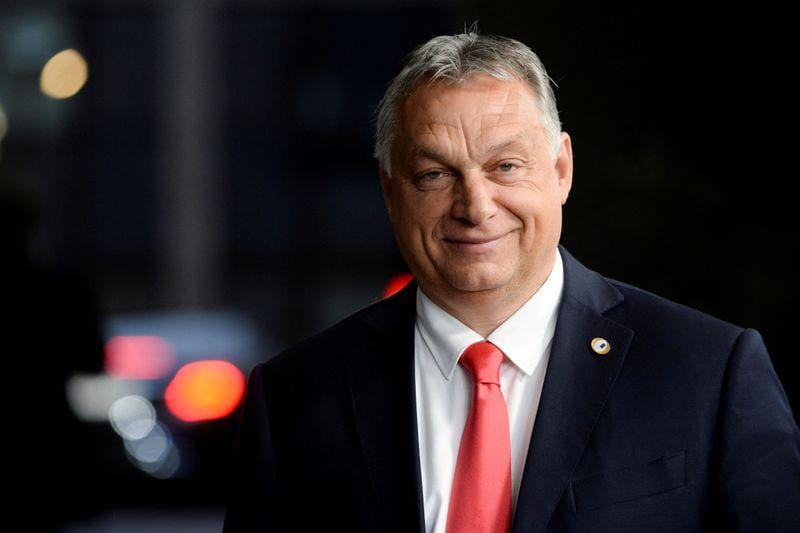 BRUSSELS (Reuters) - The European Union should reverse its sanctions on Russia, Hungarian Prime Minister Viktor Orban told Reuters on Friday, as he pushed for a resumption of trade with Moscow and a European army that would restrain the Kremlin's might.

Asked if the EU should impose new penalties on Russia over the poisoning of leading Kremlin critic Alexei Navalny, the nationalist Hungarian leader said:

"From the Hungarian point of view, we don't see why we should do that. But if the European Union would like to initiate that, we are ready to consider."

The European Union introduced sanctions on Russia over the 2014 annexation of Crimea from Ukraine. It stepped them up over Russia's subsequent backing for rebels facing off against government troops in east Ukraine, a conflict that has killed more than 13,000 people to date.

Those penalties hit Russia's energy, financial and arms sectors. The bloc also has a ban on doing business with Moscow-annexed Crimea and a blacklist of people and firms seen responsible for spreading havoc in ex-Soviet Ukraine.

"What we are doing on sanctions to Russia is not a reasonable policy," said Orban, whose country is building a new nuclear power plant with Russian state support.

In late 2017, most EU states signed a defence pact, led by Germany and France, to fund and develop joint military hardware in a show of unity after Britain's vote to quit the bloc.

But progress has been slow and results are likely to take a decade or more, meaning the EU is still some way off matching its economic prowess with military muscle.

"If we would like to have an equal relationship with Russia we need to have a strong military power in Europe," said Orban, who has pursued relatively close ties with Russian President Vladimir Putin.

Orban also said the EU must not coerce Cyprus into accepting separate sanctions on Belarus.

The bloc vowed weeks ago to impose penalties on Minsk over election fraud and human rights abuses. But any such decision requires unanimity of all the 27 EU member states and Nicosia has blocked the move due to a separate dispute with Turkey.

"Don't humiliate Cyprus," Orban said. "They don't like that idea. I disagree on that but that's their position. Sanctions could be negotiated again and again, and if there is a unanimity ... we can do so. But now there is no agreement."

The case has embarrassed the EU, highlighting decision-making paralysis in a bloc of 27 countries that in many areas - foreign policy included - require unanimity to act.

Orban, who is often at loggerheads with the EU over his hardline migration policies and what the bloc decries as his moves to undercut democratic checks and balances, defended the right of a sole member state to prevent the whole bloc from making decisions.

That principle has helped him in the past and his eurosceptic allies ruling in Poland have vowed to protect Budapest from any Brussels punishment.

European Commission President Von der Leyen this month pushed to move away from unanimity, which has left the bloc increasingly unable to find joint lines on issues ranging from Venezuela to Mali.

But, wearing no tie and sitting on an armchair with his legs wide apart - as Putin himself often does in public appearances - Orban disagreed: "If one member state does not like something on an important issue the others must respect it."

Orban said Hungary and three other eastern EU peers on Thursday presented a plan for economic support for Belarus to Von der Leyen.

"We would not like to do the same thing as it happened with Ukraine that we had the political concept but we haven't had an economic concept," said the Hungarian premier.

The plan envisages economic support from the International Monetary Fund, the European Investment Bank and the European Bank for Reconstruction and Development, which Warsaw has said should be at least a billion euros in total.