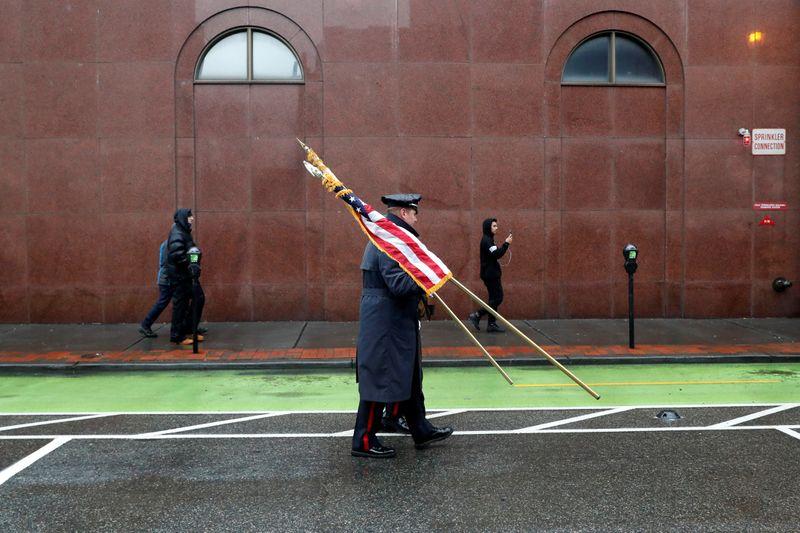 NEW YORK (Reuters) - Police turned out by the hundreds on Tuesday to mourn a fallen comrade, a northern New Jersey detective who was the first of six people to die last week in a shooting rampage that authorities have labeled an act of domestic terrorism.

As bagpipes wailed in a cold, steady rain, a hearse delivering the flag-draped coffin of Jersey City Police Detective Joseph Seals arrived at Saint Aedan's Church, where a team of honor guards carried it inside for a funeral mass.

Seals, 40, was the first of four people killed on Dec. 10 by a gun-wielding man and woman, who died following a four-hour gun battle with police after holing up in a kosher market, authorities said.

A native of Jersey City, just across the Hudson River from New York City, Seals leaves a wife and five children. He became a detective on the police force two years ago after working his way up the ranks since joining in 2005.

A GoFundMe page set up by Jersey City Police Officer’s Benevolent Association had raised more than $567,000 for his family by Tuesday at midday.

Seals had gone to a cemetery on Dec. 10 to meet an informant as part of an unrelated gun or narcotics investigation, PIX11 television reported, citing an unidentified senior law enforcement source.

While there, he approached a van that was suspected of being involved in a murder in nearby Bayonne. He was ambushed by the pair, David Anderson, 47, and Francine Graham, 50, PIX11 and other local media reported.

A Jersey City police spokeswoman declined to comment on the reports.

The pair then drove to the JC Kosher Supermarket where authorities said they shot and killed three people and exchanged gunfire with police. The siege ended after four hours when police crashed an armored vehicle through the wall of the market.

After examining the attackers' social media posts and other evidence, authorities said last week the pair had expressed interest in the Black Hebrew Israelites, a group unaffiliated with mainstream Judaism and some of whose offshoots the Southern Poverty Law Center lists as hate groups. Officials said they had not established an official link between the shooters and the group.