Hundreds missing in Laos after collapse of dam under construction

By Amy Sawitta Lefevre BANGKOK (Reuters) - Hundreds of people in southern Laos are missing and many are feared dead a day after a hydropower dam under construction broke, killing several as it swept away homes in flash flooding, state media reported on Tuesday. 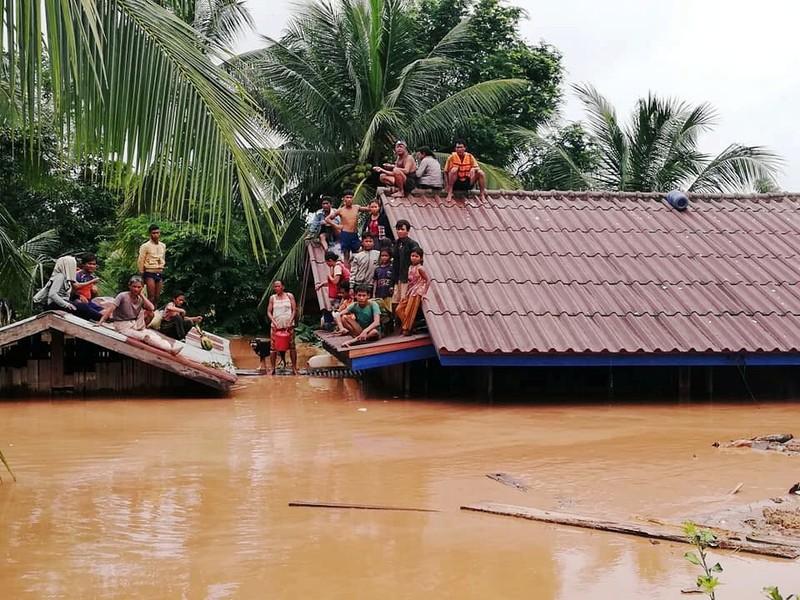 BANGKOK (Reuters) - Hundreds of people in southern Laos are missing and many are feared dead a day after a hydropower dam under construction broke, killing several as it swept away homes in flash flooding, state media reported on Tuesday.

More than 6,600 people are homeless, the Lao News Agency reported. It showed pictures of villagers wading through muddy floodwater carrying belongings. Others boarded rickety wooden boats or stood on the roofs of partially submerged houses.

"The disaster has claimed several lives, left hundreds of people missing and more than 1,300 families (6,600 people) homeless," it reported.

The South Korean company that has a stake in the project said part of a small supply dam was washed away and the company was cooperating with the Laos government to help rescue villagers near the site.

"We are running an emergency team and planning to help evacuate and rescue residents in villages near the dam," a SK Engineering & Construction spokesman told Reuters by telephone.

The $1 billion project was to build two dams with five auxiliary dams used to hold water beyond what is held by the main dams.

Another official of SK Engineering & Construction said the company ordered the evacuation of 12 villages as soon as it became clear that the dam could collapse.

Later, the company said in a statement the upper part of the supply dam was lost by torrential rains on July 22 but its repair work did not go smoothly due to the rains and more portions of the dam were fractured and overflowed in the following day.

The South Korean foreign ministry said in a text message to reporters that 50 workers of the company and three from Korea Western Power Co. who were stationed at the construction site had been evacuated.

The dam collapsed at 8:00 p.m. local time (1300 GMT) on Monday, releasing 5 billion cubic metres of water and several hundred people are missing after homes were swept away, the Lao News Agency said. It said several people had died.

A video posted by the ABC Laos news on its Facebook page showed villagers stopping to watch fast-flowing water from the side of a riverbank.

Another showed a distraught women getting into a wooden boat with her baby, saying that she had to wait to be rescued after the floodwater came and her mother was still trapped in a tree.

The prime minister of the Communist-run Southeast Asian nation, Thongloun Sisoulith, has suspended government meetings and led Cabinet members to monitor rescue and relief efforts in one of the affected areas, the state agency reported.

One of Asia's poorest and most secretive countries, Laos is landlocked, but aims to become the "battery of Asia" by selling power to neighbours through a series of hydropower dams.

Lao experienced one of its worst natural disasters in 2013 when five major monsoon storms hit in a period of three months, according to the ReliefWeb humanitarian information portal. It said that approximately 347,000 people were affected by severe flooding in that disaster.

Environmental rights groups have for years raised concerns about Laos' hydropower ambitions, including worries over the impact of dams on the Mekong River, its flora and fauna and the rural communities and local economies that depend on it.

The collapsed dam was expected to start commercial operations by 2019 and export 90 percent of its power to Thailand under a Power Purchase Agreement between the Xe-Pian-Xe Namnoy Power Company (PNPC) and the Electricity Generating Authority of Thailand (EGAT).

The remaining 10 percent of power would be sold to the local grid under an agreement between the PNPC and the Electricite du Laos.

The dam "was fractured and the water had leaked to the downstream area and down to the Xe-Pian River which is about five kilometres from the dam," said Kijja Sripatthangkura, chief executive officer of Ratchaburi Electricity Generating Holding Company.

International Rivers, a U.S.-based group that works to protect rivers and the rights of communities dependent on them, said the accident exposed "major risks" associated with some dam designs that cannot cope with extreme weather conditions.

"Unpredictable and extreme weather events are becoming more frequent in Laos and the region due to climate change," the group told Reuters in an e-mail.

"This also shows the inadequacy of warning systems for the dam construction and operations. The warning appeared to come very late and was ineffective in ensuring people had advance notice to ensure their safety and that of their families."