By Anthony Esposito SANTIAGO (Reuters) - Father-of-three Alex Nunez was returning from work in October during a military curfew imposed to curb violent protests in Chile's capital Santiago when, his family say, he was chased by three police officers who beat him badly. Nunez, a 39-year-old repairman, made it home that night but was rushed to hospital, where he died from his injuries shortly afterwards 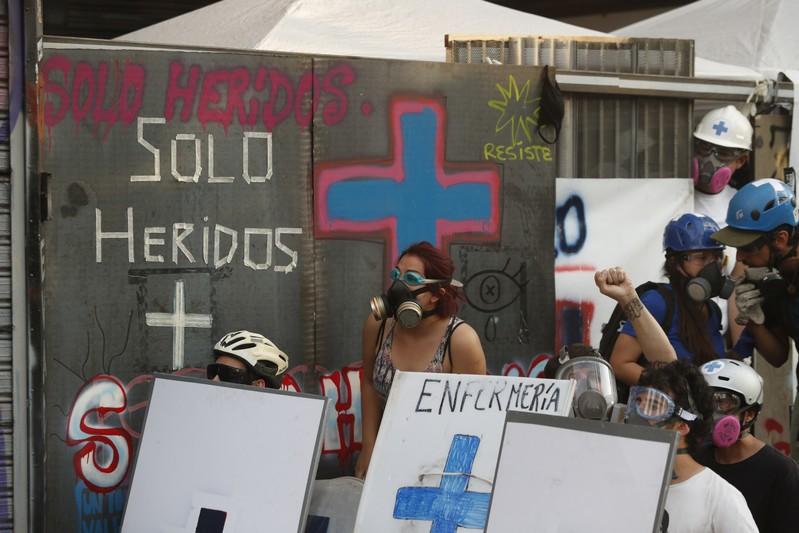 SANTIAGO (Reuters) - Father-of-three Alex Nunez was returning from work in October during a military curfew imposed to curb violent protests in Chile's capital Santiago when, his family say, he was chased by three police officers who beat him badly.

Nunez, a 39-year-old repairman, made it home that night but was rushed to hospital, where he died from his injuries shortly afterwards.

"Only 5% of his brain was working. They couldn't operate," his widow Natalia Perez told Reuters at her home in the low-income Santiago area of Maipu.

"He had a brain injury, cerebral edema and fractured skull."

Police did not respond to a request for comment on the case and Reuters could not independently verify the family's account.

Public prosecutors in Chile are investigating more than 1,000 cases of alleged abuses - ranging from torture to sexual violence - by security forces during weeks of anti-government unrest. There are 1,000 more allegations reported but still to be looked at, said Ymay Ortiz, head of the public prosecutor's rights division.

She said even more possible victims could be afraid to report abuse and approach police amid the toughest crackdown since Augusto Pinochet's military dictatorship ended in 1990.

"We are working hard to generate other channels so that the victims feel able to make complaints," she said.

Police have said they are following protocols and are properly trained for riot control, but did not respond to specific questions from Reuters.

Police chief Mario Rozas has ordered riot officers bearing arms to wear cameras and said earlier this week that rights specialists will be deployed to protests.

As street clashes rage in the prosperous Andean nation, the allegations of police brutality have put pressure on centre-right President Sebastian Pinera, who has axed ministers and cancelled major summits to quell anger.

Pinera has acknowledged "abuses" in the handling of the protests.

"With the same force that we are going to investigate, prosecute and sanction those criminal groups who have destroyed property, we will investigate any excess, failure of protocol in the use of force or excessive use of force," he said in a Nov. 6 speech.

The unrest was sparked by a hike in metro fees but spread to encompass pent-up grievances over income inequality and soaring living costs. The protests have left at least 24 dead, around 7,000 detained, 2,365 demonstrators hospitalized and 800 police officers also injured, according to authorities and rights groups.

The demonstrations have sometimes devolved into arson, riots and looting, wreaking billions of dollars of damage to infrastructure and businesses. Santiago's public transport system has been hobbled.

Many protesters have been blinded by rubber bullets and tear gas canisters, according to medics. Patricio Acosta, president of Red Cross Chile, said more people lost an eye in the past three weeks than in the last 20 years.

The Chilean Ophthalmological Society has registered 225 instances of severe eye trauma from Oct. 19 to Nov. 10 and said that may rise.

Natalia Aravena, a 24-year-old nurse, said she was heading to a protest near the Moneda presidential palace when police sprayed the crowd with a water cannon.

"The cops got out of their vehicle with weapons to shoot tear gas. They were shooting into the air and then they started to shoot directly at the people," said Aravena.

She said a canister smashed into her face and ruptured her eye, leaving her partially blind. "I was protesting with my voice and they attacked me with a weapon," she said.

Camila Miranda, a 24-year-old street performer, said she was participating in a peaceful march on Nov. 4 centred on Plaza Italia - a downtown hub that symbolically separates Santiago's haves and have-nots - when violence broke out.

Miranda took cover next to a kiosk and was hit by six rubber bullets, four of them piercing her skin, she said. As blood streamed down her legs, she grabbed a fence to hold herself up and police sprayed her in the face with tear gas, she said.

She was dragged to a police van, punched in the head and sprayed with more gas. A Reuters photographer captured the scene.

Convalescing at a friend's home, Miranda said she would march again.

"We don't mind being hungry, facing hardship, neglect, pain," she said. "People are willing to make a sacrifice to achieve real change."