By John Davison and Ahmed Rasheed NAJAF, Iraq (Reuters) - In the pre-dawn hours of Nov. 28, after Iraqi demonstrators set the Iranian consulate in the southern holy city of Najaf ablaze, the killings began 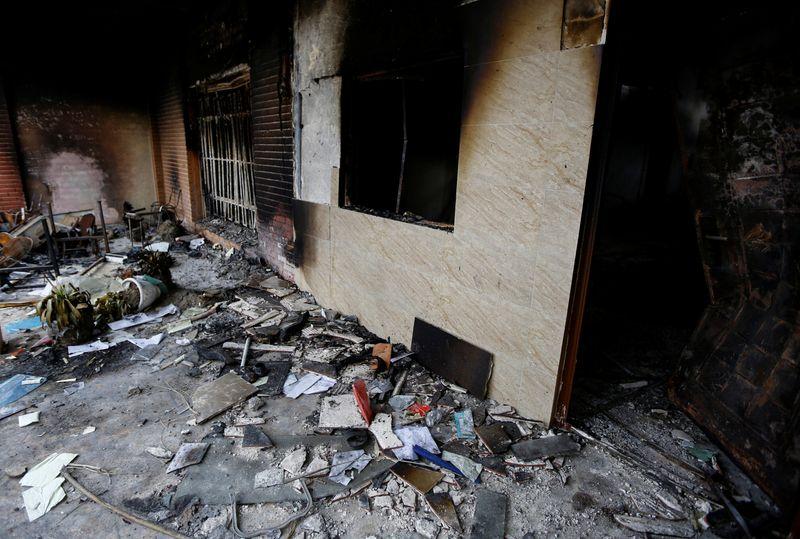 NAJAF, Iraq (Reuters) - In the pre-dawn hours of Nov. 28, after Iraqi demonstrators set the Iranian consulate in the southern holy city of Najaf ablaze, the killings began.

By the end of that day, Iran-linked militiamen in Najaf and Iraq's elite Interior Ministry forces in Nassiriya farther south had shot dead scores of mostly unarmed demonstrators with assault rifles and machine guns. It was the single bloodiest episode of Iraq's two-month-old anti-government uprising.

The next day, Iran-backed Prime Minister Adel Abdul Mahdi said he would quit.

Reuters interviews with more than two-dozen protesters, paramedics, security officials and politicians in Najaf, Nassiriya and Baghdad revealed how the government's brutal response and the actions of uncontrolled militias on the ground led to the prime minister's resignation. Abdul Madhi's successor - who will be an interim leader - is technically supposed to be named this week.

The downfall of Abdul Mahdi earned a scalp for tens of thousands of protesters seeking to remove an Iraqi ruling elite they view as corrupt and fend off Iran's influence in their country.

Reuters' interviews filled in details of that November day, including the lead-up to the killings and the flurry of backroom activity that signaled the end for Abdul Mahdi. Most sources declined to be named out of concern for retribution from the government or armed groups.

Many of the circumstances have not been previously reported, including what led to the security forces' fatal attacks on 60 demonstrators in Nassiriya, and how much pressure from Shi'ite clans in the south was brought to bear on religious and state institutions.

Two senior security sources involved in advising the Iraqi government, speaking out for the first time, told Reuters that after the consulate burned in Najaf, Abdul Mahdi dispatched at least five military commanders to "restore security by any means" in the southern Shi'ite and tribal heartlands. In response, they said, the commander sent to Nassiriya, Lieutenant General Jamil al-Shammari, ordered elite Rapid Response Division units to fire upon unarmed protesters.

"Sending military men to handle security in turbulent areas like Nassiriya and Najaf was the wrong decision," one of the security sources privy to the internal deliberations said. "When the prime minister read why so many people were killed in Nassiriya, he realized he'd made a big mistake."

Under tribal pressure to take a stand against the violence that felled some of their kinsmen, the country's most prominent Shi'ite cleric, Grand Ayatollah Ali al-Sistani, ended support for the government, tribal and clerical sources said. That, in turn, spelled the end for Abdul Mahdi.

Spokespeople for the Iraqi government, the military and Iraqi paramilitary groups did not respond to requests for comment. Iraq has previously denied ordering live fire against demonstrators, and paramilitary groups, including Iran-linked militias have denied a role in putting down protests. Reuters could not reach Shammari, who went into hiding after the killings, for comment.

Iranian officials could not be reached but have consistently denied groups they back have killed peaceful protesters.

The move to replace Abdul Mahdi is unlikely to end the biggest protests against Iraq's Shi'ite Muslim-dominated, Iran-backed political class which ascended after the 2003 U.S.-led invasion that toppled dictator Saddam Hussein. Already, more than 400 people have been killed in the unrest since October.

After decades of war against its neighbours, U.N. sanctions, two U.S. invasions, foreign occupation, sectarian civil war, and the difficult but ultimately successful defeat of the Islamic State insurgency in 2017, many Iraqis are desperate. Their frustration, culminating in the current uprising, is inflamed by the breakdown of public services, broken infrastructure and a lack of jobs despite oil output at record levels.

The first blood on November 28 was shed in Nassiriya, at about 3 a.m., five hours after the military commanders were ordered south.

Rapid Response units led by Shammari began shooting at demonstrators blocking a bridge and nearby roads in an attack that lasted about two hours, protesters said. Thirty-one people were killed that morning and 29 more died over the next 24 hours, according to police and hospital sources.

Three medics showed gruesome videos on their phones of protesters with fatal wounds from gunfire. Reuters could not verify the videos.

"All those who died were from bullets to the head or chest," said Karar Hacham, a 30-year-old medic and activist. "A lot of ammunition used was from BKC machine guns."

Raad Harbi, a 21-year-old demonstrator who was on the bridge, said they were nearly surrounded by government "special forces" wearing the insignia and uniforms of elite Interior Ministry units. "They came from two directions and deployed snipers to a nearby building to take shots as us."

Protesters said they saw Shammari around the town the next day. Local authorities issued an arrest warrant for the commander under pressure from powerful armed tribes. Shammari then fled by military helicopter, one of the two security sources said. He is still in hiding.

In Najaf, the killings began in the afternoon, this time at the hands of militiamen cracking down on protesters venting fury against Iran, whom they blame for an entrenched system of political patronage and corruption. Iran, a Shi'ite Muslim state, has close links to Iraqi Shi'ite politicians who have run the country since the toppling of Saddam.

Protesters had ripped Islamic Republic emblems off the Iranian consulate's charred remains and scrawled graffiti: "Iraq is off-limits for you."

They then turned their anger towards the Mohammed Baqir al-Hakim shrine complex next door, dedicated to the founder of an Iran-backed group that fought Saddam in the 1980s, local activists and police said. Skirmishes broke out between demonstrators and shrine guards. Protesters believed that gunmen were holding demonstrators hostage inside, which shrine officials, police and other security sources have denied.

The commander sent to Najaf by Abdul Mahdi, Major General Ali al-Hashimi, failed to control the crowds, the security sources said. Local police refused to coordinate with forces he brought from Baghdad because he deployed them without consulting police chiefs, a senior security source in Najaf said.

Hashimi's forces withdrew from the area and protesters petrol-bombed the shrine doorway. The militiamen, wearing civilian clothes soon arrived and fired into the crowds, another local security source and several protesters said. Hashimi could not immediately be reached for comment.

The source said more than 300 gunmen were involved in the shootings.

"Najaf ran with blood," said Saif, a 28-year-old protester who escaped with a bullet wound to the leg. He spoke on condition that only his first name be used.

The security sources and about 20 medics and protesters said the gunmen in Najaf were from militia groups with links to Iran and to the shrine itself, which see themselves as defenders of the religious site.

An official close to the shrine, Ali Khafaji, said its custodians refused offers by these militia groups to intervene, but that it was possible individual militiamen had deployed of their own accord and been involved in the killings.

"Government security forces couldn't deal with the situation," Khafaji said. "Najaf was out of control."

In Baghdad, Abdul Mahdi's heart sank as soon as the killings were reported, one of the security sources who is close to the prime minister's office said.

"He'd been convinced by top military aides that a tough stance in Najaf and Nassiriya would bring the situation under control. He was shocked after hearing his commanders instead escalated unrest by causing a high protester death toll.

"He knew Sistani would not tolerate this."

Abdul Mahdi's grip on power was already shaky. He had nearly been ousted a month before but Iranian Major General Qassem Soleimani, head of the Revolutionary Guards' elite Quds Force, had stepped in to rally pro-Iran parties behind him.

Now incensed southern tribes whose kin had been gunned down were heaping pressure on Sistani to oppose Abdul Mahdi's government, threatening to take up arms against security forces and militias, tribal leaders told Reuters. If Sistani did not intervene to stop the "bloodbath," they told him in a Nov. 28 letter, the tribes would take matters into their own hands.

"We said the tribes in the south will bear arms to protect protesters," said Sheikh Ali al-Ghizzi of Nassiriya, a prominent tribal leader who signed the letter.

Sistani's aides, also shocked by news from Najaf and Nassiriya, "believed if they didn't react to stop the killings, (Sistani's) status among Shi'ites would be on the line," a Shi'ite cleric close to the aides said.

Abdul Mahdi "was itching to quit immediately," a lawmaker close to him said – but Iran-backed parties convinced him to wait until after Sistani's announcement during his Friday sermon, in case they could find another solution.

No solution presented itself.