Houston in crosshairs of Hurricane Laura, forecast to be major storm by landfall

By Gary McWilliams and Brad Brooks HOUSTON (Reuters) - Hurricane Laura could make a direct hit on Houston this week and hundreds of thousands of people living on the Gulf Coast should evacuate immediately, officials in Texas warned on Tuesday. 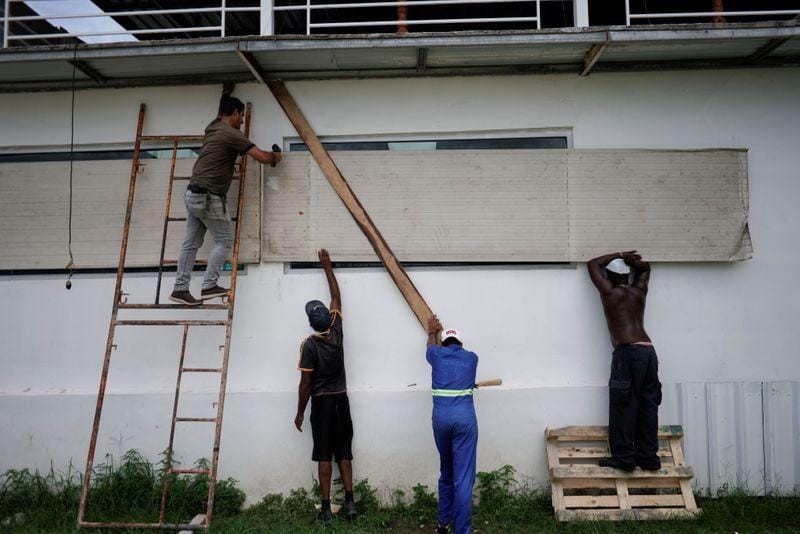 By Gary McWilliams and Brad Brooks

HOUSTON (Reuters) - Hurricane Laura could make a direct hit on Houston this week and hundreds of thousands of people living on the Gulf Coast should evacuate immediately, officials in Texas warned on Tuesday.

The National Hurricane Center forecast that storm surge could send up to 13 feet (4 meters) of flood water as much as 30 miles (48 km) inland along the coast near the Texas and Louisiana border.

Lina Hidalgo, the top executive for Harris County, which encompasses Houston, warned of deadly winds and a destructive storm surge after Laura makes landfall late Wednesday or early Thursday. She said that put millions of lives at risk as Laura moved westward and took aim at the fourth-biggest city in the United States.

"This storm certainly can cause unprecedented devastation," Hidalgo said at a news conference. "We truly have to say: Prepare for the worst."

The hurricane was packing winds of 80 miles per hour (130 kilometers per hour) as it moved across the Gulf of Mexico, qualifying it as a Category 1 hurricane on the five-step Saffir-Simpson scale for measuring hurricane intensity.

Laura was forecast to become a "major" hurricane of Category 3 or higher by Wednesday night as it approaches the U.S. coast, according to the NHC.

The storm was located about 480 miles (770 km) southeast of Lake Charles, Louisiana, on Tuesday afternoon and moving to the west-northwest at 17 mph (28 kph), the NHC said.

"We've been through this before; we're prepared. Everybody downtown has boarded up their businesses and people are leaving the city," said Gina Spagnola, president of the Galveston Chamber of Commerce, as she boarded up windows on her own waterfront home.

Looking over her shoulder at dark storm clouds on the horizon, Spagnola said Galveston, where in 1900 the deadliest hurricane ever to hit the United States made landfall, killing more than 12,000 people, was resilient but weary.

"This is last thing anybody needs, with the pandemic hitting our families and businesses so hard," she said. "Everybody has a plan, and we'll partner up to help each other after the storm."

More than 420,000 Texas residents and another 200,000 people in neighboring Louisiana were under mandatory evacuation orders on Tuesday. Hidalgo County urged voluntary evacuation in the coastal region surrounding Houston, and shelters were set up in San Antonio, Dallas and Austin.

Houston, which lies about 45 miles (70 km) north of the open water of the Gulf of Mexico. was pummeled in 2017 by Hurricane Harvey, which killed at least 68 people and caused $125 billion in property damage. Hurricane Laura is forecast to dissipate quickly after landfall, with the greatest danger more from wind and storm surges than rain.

"It's imperative that you make plans this morning to secure your homes and move you and your family to safety off island," Galveston's acting Mayor Craig Brown said in a statement.

Federal Emergency Management Agency (FEMA) Administrator Pete Gaynor said on Twitter that a team was already deployed to the region. White House Spokesman Judd Deere said on Twitter that President Donald Trump has been briefed about the hurricane and that FEMA has deployed stockpiles of "response resources and commodities at strategic locations across the Gulf Coast."

Lamar University in Beaumont, Texas, about 80 miles (129 km)east of Houston, was closed and its 15,000 students urged to evacuate, the school said.