By Susan Cornwell and Richard Cowan WASHINGTON (Reuters) - U.S. House Speaker Nancy Pelosi on Friday accused President Donald Trump of putting American troops and civilians working in Afghanistan in danger by publicizing a planned congressional trip to the war-torn country, as tensions between the leaders spiked on the 28th day of a partial government shutdown. 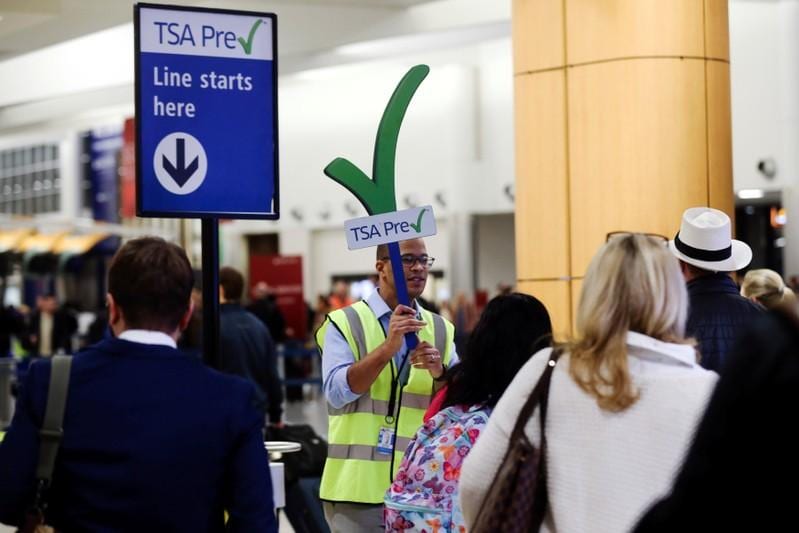 WASHINGTON (Reuters) - U.S. House Speaker Nancy Pelosi on Friday accused President Donald Trump of putting American troops and civilians working in Afghanistan in danger by publicizing a planned congressional trip to the war-torn country, as tensions between the leaders spiked on the 28th day of a partial government shutdown.

The White House rejected Pelosi's charge. The Republican Trump administration, which on Thursday had blocked Democrat Pelosi from making the trip to Afghanistan, on Friday slapped a blanket ban on all U.S. congressional travel on government-owned or operated aircraft while the shutdown continues.

White House spokeswoman Sarah Sanders said the administration was just trying to keep Pelosi in town so that negotiations could take place to try to end the partial shutdown, at four weeks already the longest in U.S. history.

"If she did (leave the country), it would all but guarantee the fact that the negotiations couldn't take place over the weekend and federal workers - 800,000 federal workers - wouldn't receive their paychecks because she wasn't here to help make a deal," Sanders told reporters. She added that it was "outrageous" that Pelosi would accuse Trump "of putting any life in jeopardy."

But Democrats said no negotiations were going on. "We have received no requests to meet from the White House," Pelosi spokesman Drew Hammill said.

Trump on Thursday had blocked Pelosi from using a military plane for a congressional trip with other high-ranking Democrats to NATO headquarters in Brussels and then Afghanistan.

Pelosi's office then was prepared to fly commercially - an idea Trump himself raised - but on Friday morning announced the trip was being postponed because the administration had leaked details that could endanger the trip or the troops the speaker had planned to visit. A White House official denied this.

"We had a report from Afghanistan ... that the president outing our trip had made the scene on the ground much more dangerous because it was just a signal to the bad actors that we're coming," Pelosi told reporters in the Capitol.

"You never give advance notice of going into a battle area. You just never do," she said. "Perhaps the president's inexperience did not have him understand that protocol. The people around him should have known that because that's very dangerous.”

A White House official, speaking earlier on condition of anonymity, denied the administration leaked Pelosi's travel plans, adding, "When the speaker of the House and about 20 others from Capitol Hill decide to book their own commercial flights to Afghanistan, the world is going to find out."

The White House on Friday escalated the argument with lawmakers, with the Office of Management and Budget announcing that Congress was effectively grounded unless lawmakers could get White House approval for trips or pay for them themselves.

"Under no circumstances during a government shutdown will any government owned, rented, leased, or chartered aircraft support any Congressional delegation, without the express written approval of the White House Chief of Staff," a memo said.

"Nor will any funds appropriated to the Executive Branch be used for any Congressional delegation travel expenses, without his express written approval," the memo added.

The partial U.S. government shutdown hit the four-week mark on Friday, with tensions mounting on both sides of the standoff over Trump's demand for $5.7 billion to help fund a U.S.-Mexico border wall.

That ultimatum, which congressional Democrats have rejected, has prevented Congress from approving legislation to restore funding to about a quarter of the federal government, which closed down partially on Dec. 22 when several agencies' funds expired for reasons unrelated to the border.

Any serious debate about immigration policy has deteriorated into a test of political wills. Pelosi earlier in the week suggested to Trump that he delay the annual State of the Union address until after the government reopens. While he did not respond directly to Pelosi's suggestion, on Thursday he denied her delegation's use of a military aircraft to go to Brussels and Afghanistan.

Asked Friday whether Trump's address would occur in the House chamber on Jan. 29 as scheduled, Sanders said: "We'll certainly keep you posted on that front."

The partial shutdown seemed certain to drag well into next week, meaning 800,000 federal workers nationwide would continue to go unpaid and some government functions would remain impaired.

The Democratic-led House of Representatives has left town for a three-day weekend, returning late on Tuesday. The Senate was expected to reconvene on Saturday.