By Lesley Wroughton WASHINGTON (Reuters) - Islamic State has been defeated in Syria, U.S. Vice President Mike Pence said on Wednesday, hours after Americans were killed in a northern Syria bomb attack claimed by the militant group. 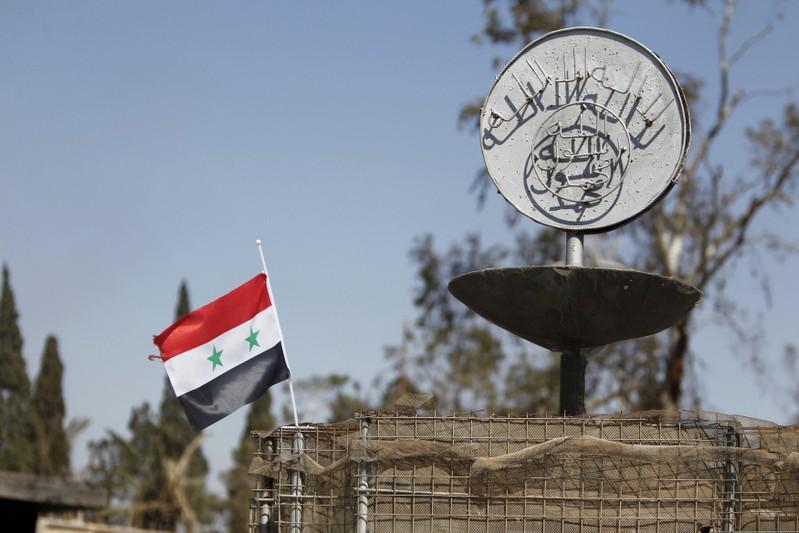 WASHINGTON (Reuters) - Islamic State has been defeated in Syria, U.S. Vice President Mike Pence said on Wednesday, hours after Americans were killed in a northern Syria bomb attack claimed by the militant group.

Pence did not mention the attack in his address to 184 chiefs of U.S. diplomatic missions who gather annually in Washington from around the world to discuss foreign policy strategy.

"The caliphate has crumbled and ISIS has been defeated," Pence told the U.S. ambassadors and other senior American diplomats, referring to Islamic State.

In separate statements later, both the White House and Pence condemned the attack and expressed sympathy for the deaths of the U.S. personnel.

The Pentagon said two U.S. servicemembers, a Department of Defense civilian employee and one contractor working for the military were killed and three servicemembers were injured in the blast in the northern Syria town of Manbij.

An Islamic State-affiliated website said the attack was the work of a suicide bomber.

Trump made a surprise announcement on Dec. 19 that he would withdraw 2,000 U.S. troops from Syria after concluding that Islamic State had been defeated there. His decision led to the resignation of U.S. Defense Secretary Jim Mattis, who cited policy differences with the president for his departure.

Despite talks of a second leaders' summit between Trump and North Korea's leader Kim Jong Un, Pence acknowledged that efforts to convince Pyonyang to give up its nuclear arsenal had not made headway.

"While the president is promising dialogue with Chairman Kim we still await concrete steps by North Korea to dismantle the nuclear weapons that threaten our people and our allies in the region," he said.

The vice president also criticized China's "unfair" trade practices and loans to developing countries that pushed up their debt levels as it tries to gain greater influence in the world.

"The truth is that too often in recent years China has chosen a path that disregards the laws and norms that have kept the world state prosperous for more than half a century," he said. "The days of the United States looking the other way are over," he added.

Pence said the administration's foreign policy was based on Trump's "America First" agenda. "No longer will the United States government pursue grandiose, unrealistic notions at the expense of American people," he said.

He acknowledged that Trump's foreign policy was "different from what the world has come to expect" and that the United States faced different threats than during the Cold War.

"Today we are not up against one super power but several great powers competing with us for preeminence across the world," he said, saying the United States faced a "wolf pack" of rogue states including Iran, Cuba, Venezuela and Nicaragua.