Beijing/Hong Kong: Hong Kong’s new police commissioner said on Saturday his force would take a flexible approach to pro-democracy demonstrations as the city gears up for a rally on Sunday that is expected to draw a huge crowd.

Chris Tang was appointed last month upon his predecessor’s retirement and amid six months of sometimes violent anti-government protests in Chinese-ruled Hong Kong. He was speaking in Beijing on a “courtesy visit” during which he briefed top officials in charge of public security, legal and Hong Kong affairs.

“We will use both the hard and soft approach. We will be stringent on illegal violent actions such as the throwing of petrol bombs, acid,” Tang told reporters in Beijing.

“For other issues, if possible, we will adopt a more flexible approach.”

Police have given a rare green light to the demonstration planned for Sunday by the Civil Human Rights Front (CHRF) group, which organised largely peaceful million-strong marches in the summer.

The march will gauge support for the pro-democracy movement following its overwhelming victory in local elections late last month. Police said they would intervene “immediately” if it turned violent.

Tang said he hoped Sunday’s protest would be peaceful. 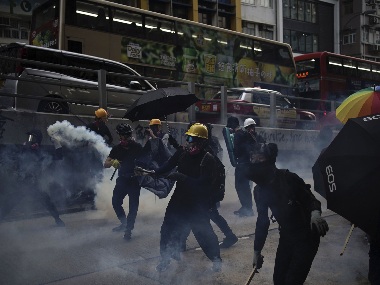 What started as demonstrations against a now-withdrawn bill allowing extradition to mainland China has morphed into calls for greater democratic freedoms and sometimes violent protests.

The international financial hub has enjoyed the relative calm in the weeks since the elections.

Protesters have set out five demands, including universal suffrage and an investigation into alleged police brutality.

Beijing has condemned the unrest and blamed foreign governments, including the United States and former colonial power Britain of interfering in the country’s internal affairs.

Tara Joseph, President of the American Chamber of Commerce in Hong Kong, told Reuters on Saturday that she had been denied entry to the neighbouring Chinese-ruled territory of Macau.

Joseph, a US citizen, said she was detained by immigration authorities for around two hours as she made her way to the former Portuguese colony for the AmCham Macau Ball. Authorities did not give a reason for refusing her entry, she added.

“I am very excited to see the country’s flag fly and to feel the country’s greatness,” he told reporters. “I would like to thank ... President Xi Jinping (for his) unwavering support of the Hong Kong police strictly enforcing the law.”

“We saw all the damages, all the wreckages, all the barricades on the roads, created by those yellow (pro-democracy) groups, the rioters, and we just couldn’t stand it anymore,” said Virginia Cheung, 54, a retired civil servant.

“I think Hong Kong police are doing very well ... The police are safeguarding our society here,” he said.