By Yoyo Chow HONG KONG (Reuters) - Hong Kong's Apple Daily tabloid responded with defiance on Tuesday to the arrest of owner Jimmy Lai under a new national security law imposed by Beijing, promising to fight on in a front-page headline over an image of Lai in handcuffs. Lai was released on bail in the early hours of Wednesday morning, flanked by his lawyers, and greeted by a throng of supporters who chanted 'fight till the end' and 'support apple, have an apple a day', referring to the pro-democracy tabloid. 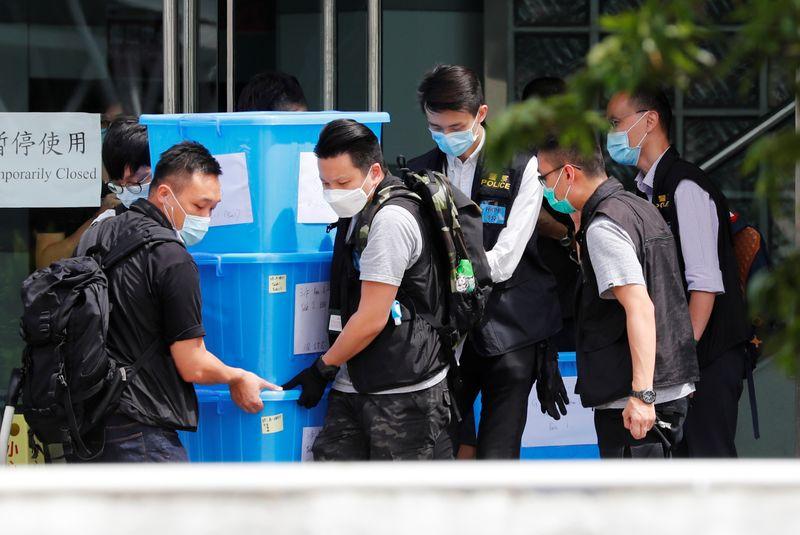 HONG KONG (Reuters) - Hong Kong's Apple Daily tabloid responded with defiance on Tuesday to the arrest of owner Jimmy Lai under a new national security law imposed by Beijing, promising to fight on in a front-page headline over an image of Lai in handcuffs.

Lai was released on bail in the early hours of Wednesday morning, flanked by his lawyers, and greeted by a throng of supporters who chanted "fight till the end" and "support apple, have an apple a day", referring to the pro-democracy tabloid.

Readers had queued from the early hours of Tuesday to get copies of the newspaper, a day after police raided its offices and took Lai into detention, the highest-profile arrest under the national law.

"Apple Daily must fight on," the front-page headline read, amid fears the new law is eroding media freedoms guaranteed when the former British colony returned to Chinese rule in 1997.

"The prayers and encouragement of many readers and writers make us believe that as long as there are readers, there will be writers, and that Apple Daily shall certainly fight on."

Mainland-born Lai, who was smuggled into Hong Kong on a fishing boat when he was a penniless 12-year-old, is one of the most prominent democracy activists in the city and an ardent critic of Communist Party rule in Beijing.

His arrest comes amid a crackdown on the pro-democracy opposition in Hong Kong that has drawn international criticism and raised fears for freedoms promised by Beijing under a "one country, two systems" formula.

The sweeping security law imposed on June 30 punishes anything China considers secession, subversion, terrorism or collusion with foreign forces with up to life in prison.

The city's Beijing-backed government and Chinese authorities say the law is necessary to restore order after months of at times violent anti-government protests last year, sparked by fears China was slowly eroding those freedoms.

Hong Kong has since become another source of contention between the United States and China, whose relations were already at their most strained in years over issues including trade, the coronavirus, China's treatment of its Uighur Muslim minority and its claims in the South China Sea.

Britain said Lai's arrest was further evidence the security law was a "pretext to silence opposition", to which China's embassy replied by urging London to stop "using freedom of the press as an excuse to discredit" the law.

'DANCING WITH THE ENEMY'

Police detained Lai for suspected collusion with foreign forces after about 200 officers searched the newspaper's offices, collecting 25 boxes of evidence.

Handcuffed and apparently wearing the same clothes after spending the night in jail, he was driven by police on Tuesday to his yacht which police searched, according to media footage.

On his release from a police station, Lai left in a black car without speaking.

Beijing has labelled Lai a "traitor" in the past and issued a statement supporting his arrest.

The Beijing-backed China Daily newspaper said in an editorial Lai's arrest showed "the cost of dancing with the enemy". The paper added that "justice delayed didn't mean the absence of justice".

Police arrested 10 people in all on Monday, including other Apple Daily executives and 23-year-old Agnes Chow, one of the former leaders of young activist Joshua Wong's Demosisto pro-democracy group, which disbanded before the new law came into force.

Chow was released on bail late on Tuesday, calling the arrest of herself and other activists "political persecution".

"It's very obvious that the regime is using the national security law to suppress political dissidents," she said.

Hong Kong's pro-democracy movement has managed to sustain broad support across the community.

Shares in Next Digital, which publishes Apple Daily, surged for a second day, gaining more than 2,078% from Friday's close, after online pro-democracy forums called on investors to show support.

In the working-class neighbourhood of Mong Kok, dozens of people queued from as early as 2:00 a.m. (1800 GMT) to buy Lai's paper.

"What the police did yesterday interfered with press freedom brutally," said 45-year-old Kim Yau as she bought a copy.

"All Hong Kong people with a conscience have to support Hong Kong today, support Apple Daily."

In another show of support, long queues formed at lunch time at the Cafe Seasons restaurant owned by Lai's son, Ian, who was also arrested on Monday.

The United States last week imposed sanctions on several top officials over what it said was their role in curtailing political freedoms in Hong Kong. China responded with sanctions on top U.S. legislators and others.