By Greg Torode, Clare Jim and Marius Zaharia HONG KONG (Reuters) - Hong Kong police fired rubber bullets and tear gas in running clashes with protesters late on Sunday amid chaotic scenes as anger over an extradition bill morphs into a fresh front against what many see as a broader erosion of freedoms by Beijing. Thousands of protesters descended on China's representative office in the city, in a direct challenge to authorities in Beijing, just hours after the latest demonstrations to rock the Asian financial central. 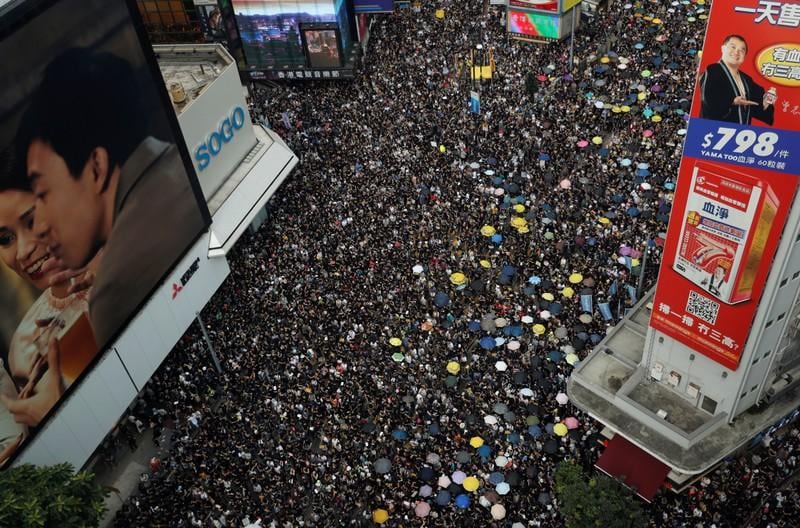 HONG KONG (Reuters) - Hong Kong police fired rubber bullets and tear gas in running clashes with protesters late on Sunday amid chaotic scenes as anger over an extradition bill morphs into a fresh front against what many see as a broader erosion of freedoms by Beijing.

Thousands of protesters descended on China's representative office in the city, in a direct challenge to authorities in Beijing, just hours after the latest demonstrations to rock the Asian financial central.

Millions have taken to the streets in the past two months in an unprecedented show of force against Hong Kong leader Carrie Lam, triggering the worst social turmoil to rock the former British colony since it returned to Chinese rule 22 years ago.

Black-clad activists, many wearing masks, defied police orders and marched beyond the official end-point of a rally that took place earlier in the day as they made their way towards the Liaison Office, in a direct challenge to authorities in Beijing.

When asked whether the protesters would attempt to force entry into the building, one 30-year-old man dressed head to toe in black said "No", as he mimicked a throat-slitting action.

"That would be the death of Hong Kong," he added.

Some protesters pelted eggs at the walls of Beijing's Liaison Office, while others spray-painted graffiti as they kept up pressure on the city's beleaguered government to heed their calls for an independent inquiry into complaints of police brutality during recent demonstrations, among other demands.

Hundreds of riot police faced off with protesters more than a kilometre from the Liaison Office, firing tear gas as police and ambulance sirens echoed through the chanting crowds. Local broadcaster RTHK and other local media reported police also fired rubber bullets. Police did not immediately respond to a Reuters request for comment.

Activists had daubed graffiti on massive concrete pillars leading up to Beijing's Liaison Office, with the words "Restore Hong Kong, Revolution of The Time".

The Hong Kong government said in a statement it strongly condemned the demonstrators' "malicious encirclement" of the Liaison Office building, while a spokesman for the office expressed "severe condemnation" at the "radical demonstrators".

Sunday's protest, which had proceeded peacefully along the police-mandated route, is the latest in a series of rallies that have plunged the Chinese-ruled city into political crisis.

Some held up banners that said, "LIAR" and "No excuse Carrie Lame". A poster plastered on a lamppost called for an "Investigation on police brutality".

More demonstrations are planned over the coming weekends, posing the greatest popular challenge to Chinese leader Xi Jinping since he took power in 2012. For Xi's Communist Party in Beijing, stability is an overwhelming priority.

At a train station in the New Territories district of Yuen Long, screams rang out as protesters who had attended the demonstration were attacked by men in white T-shirts, some armed with poles, as they arrived home.

The turmoil comes at a delicate time for Beijing, which is grappling with a trade dispute with the United States, a faltering economy and tensions in the South China Sea.

Recent images of police firing rubber bullets and tear gas near the city's financial district as well as chaotic scenes of demonstrators storming the legislature were beamed live to the world - except in mainland China, where they were blocked from many social media sites.

Earlier on Sunday, authorities used blue and white water-filled barriers to barricade government and police headquarters, while global bank HSBC, in a rare move, pulled down large metal barriers on the street level of its gleaming skyscraper building.

While most of the rallies have passed off peacefully during the day, some have erupted into violence late at night when more radical protesters have clashed with police.

The city's police force has come under scrutiny after officers fired rubber bullets and tear gas last month to disperse demonstrators in some of the worst violence to roil Hong Kong in decades.

The police are struggling to cope amid haphazard decision-making, worsening morale and anger among rank-and-file officers that they are taking the public heat for government unpopularity, serving and retired officers, politicians and security analysts told Reuters.

The latest protest comes a day after tens of thousands gathered to voice support for the police, whom some have accused of using excessive force against activists, and demand an end to the violence.

Sunday's march focused on calls for the full withdrawal of the extradition bill, which would allow people to be extradited to mainland China for trial, and an independent investigation into complaints of police brutality.

Other demands include charges against protesters to be dropped and universal suffrage.

"I came back to Hong Kong this summer because of the protests," said Mandy Ko, 27, who is originally from Hong Kong and now lives in Australia.

"My spirit is still with Hong Kong people."

Activists formed human chains as they handed out supplies, including umbrellas, hard hats and even gas masks to protesters.

A Reuters reporter received an AirDrop message that said "Be Water", a strategy inspired by a maxim of home-grown martial arts legend Bruce Lee, that encourages protesters to be flexible and retreat strategically.

Lam has apologised for the turmoil the extradition bill has caused and declared it "dead". Opponents of the bill, which they fear could be used to silence dissent, say nothing short of its withdrawal will do.

Under the terms of the handover from Britain in 1997, Hong Kong was allowed to retain extensive freedoms under a "one country, two systems" formula, including an independent judiciary and the right to protest.

But for many Hong Kong residents, the extradition bill is the latest step in a relentless march towards mainland control.

The protests have at times paralysed parts of the financial district, shut government offices and disrupted business operations across the city. Officials have also warned about the impact of the unrest on the economy.

A commentary published in the Chinese Communist Party's People's Daily newspaper on Sunday said: "If violence continues, it will inevitably deal a greater blow to Hong Kong's prosperity and stability."

China has condemned the violent protests as an "undisguised challenge" to the one country, two systems formula.