By Brendan O'Brien CHICAGO (Reuters) - During a typical school day at Chicago's Benito Juarez Community Academy, James Klock's high-school students can be found splicing and connecting wiring, getting the hands-on experience needed to become skilled electricians. The coronavirus pandemic has changed all that. 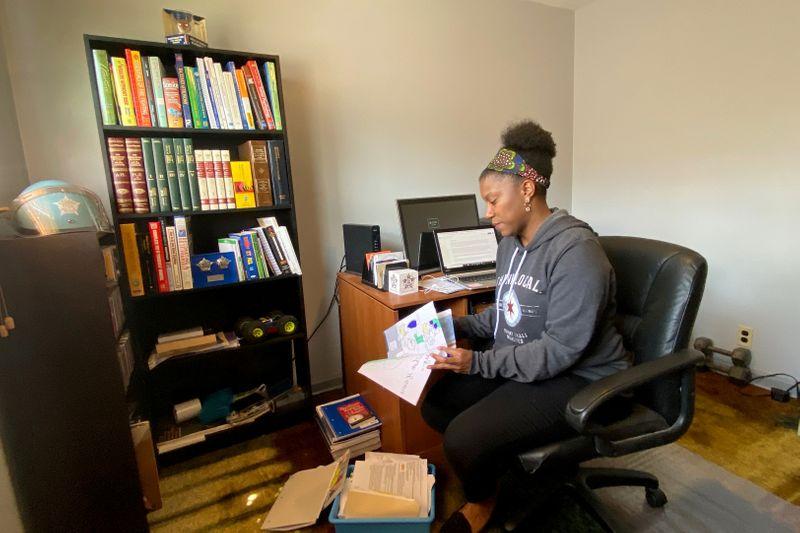 pandemic has changed all that.

Beginning Monday, Klock will have to teach his budding electricians online, forcing them to learn by watching, not doing, with their tools and equipment locked away in a shuttered classroom - but that depends on internet access.

The move to online learning has exposed a digital divide that plagues the entire Chicago public school system, the third largest in the country. Some 70% of its 360,000 students are economically disadvantaged and a third have no access to a laptop or desktop computer.

"This moment in time is really revealing the systemic and structural inequities that are built into the system," Klock said.

Klock is one of 25,000 Chicago Public Schools teachers who have scrambled to start online classes by Monday, a deadline set by Illinois Governor J.B. Pritzker after he extended a stay-at-home order that shut down all 600 schools in the system to slow the spread of the COVID-19

The weeks-long closure of the city's 600 schools is the latest blow to a school system perpetually bruised by budget shortfalls, classroom overcrowding and labor battles.

Mayor Lori Lightfoot has called the shift to online learning a "Herculean task."

Chicago teachers have had two weeks to develop online lesson plans and arrange online teaching resources. They have had to set up livestream video and messaging platforms to interact with students. After consulting with parents, many have created flexible teaching schedules to work around their student's upended lives.

Chicago is not alone. Many school systems from New York to Los Angeles have launched remote learning programs, after the pandemic forced the cancellation of classes for the vast majority of American students.

"Some pieces of this are playing out all over the country, especially in urban and rural places that are dealing with extreme amounts of poverty and trauma," said Stacy Moore, executive director of the Chicago chapter of Educators for Excellence, a teacher advocacy organization.

What makes Chicago different is that the school system is coming off a bitter, 11-day teachers' strike in October. One of the main issues in the work stoppage was a demand that the district do more to address inequalities and inequities.

"It's been a tough year in Chicago when it comes to education," Moore said. "All of those things that already existed are being further exacerbated by the current situation."

Many of Klock's students live in the working-class neighborhood of Pilsen on the city's west side, where nine of every 10 children live in low-income, minority households, district data showed. Three of four only have cell phones to connect to the web, and a few have had to get grocery store jobs to support their financially strapped families, according to Klock's own assessment.

"They're incredibly resilient," he said. "They are going to figure it out because that's what they and their families do."

In parts of the city's south and west sides, more than half of households have spotty internet connections or none at all, according to a recent Chicago Tribune-ProPublica Illinois analysis. The district estimates that 115,000 students, or a third, lack a device for e-learning.

Officials are scrambling to distribute 100,000 laptops to students while internet service providers are offering special deals for Chicago families.

In the Englewood neighborhood, one of the city's most impoverished, Winnie Williams-Hall, a special-needs teacher at Nicholson STEM Academy, braces for what may be in store for her on Monday.

"I have no idea if all of my 14 students will be logged online," Williams-Hall said. "So there's a level of uncertainty."

She plans to use textbooks, dry erase boards and giant sticky notes to teach her middle-school students reading, math, social studies and science through live and recorded videos.

Williams-Hall said most of her students rely on personal relationship with her. Some are dealing with trauma; others have learning and intellectual disabilities and emotional disorders. A few read at a kindergarten-first-grade level, despite being only months away from high school.

"They can message me and text me, but that's not the same," she said.

(Reporting by Brendan O'Brien in Chicago; Editing by Frank McGurty and Leslie Adler)