‘Her Majesty's a pretty nice girl’: The Queen as imagined by the Beatles, Netflix, novelists

Over the past 70 years, authors, filmmakers, playwrights, songwriters and painters have responded to the Queen as both symbol and human being, whether commenting on the heights of her position or attempting to tease out the inner life of a woman who spoke infrequently in public and avoided personal

In the spring of 2012, portrait artist Ralph Heimans stood on the Cosmati pavement of Westminster Abbey and awaited the subject of his latest commission, Queen Elizabeth II. When she approached, he says, it was an extraordinary moment.

“She was wearing her Robe of State, with four footmen holding it, and as she came down the long corridor it was a very theatrical kind of entrance,” Heimans said soon after he had learned that the Queen had died Thursday at age 96.

Also read: Ruling the screen: A look at the depictions of Queen Elizabeth II in films and shows

After spending an hour with the Queen, “discussing niceties,” he came away with “a sense of how thoughtful she was, almost a sense of shyness, an introspective quality.” In his oil painting, which hangs in Westminster, he drew her as a solitary, even brooding figure, her eyes cast down, with the vastness of Westminster behind her like so much weight from the past — and present.

“I wanted to show her in this private moment, with a certain gravity about her,” he says.

Over the past 70 years, authors, filmmakers, playwrights, songwriters and painters have responded to the Queen as both symbol and human being, whether commenting on the heights of her position or attempting to tease out the inner life of a woman who spoke infrequently in public and avoided personal revelations. The dual qualities, majesty and mystery, found her imagined in settings ranging from the sobriety of royal art to the rage of punk music to the varied characterisations of film and television. 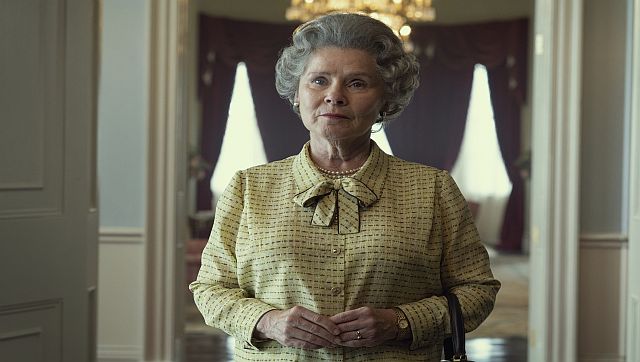 “I think because she was a constant presence who didn’t say very much, it allowed people to project on her in different ways,” says Elizabeth Holmes, whose “HRH: So Many Thoughts on Royal Style” was published in 2020. “Also, you can very easily make people look like the Queen. You can take that as a starting point and run.”

On film, the Queen has been fictionalised in everything from Helen Mirren’s Oscar-winning portrayal in The Queen to the farcical Naked Gun movies and the grim “Spencer,” with Kristen Stewart as Princess Diana and Stella Gonet as Elizabeth. But she has been dramatised most fully in the Emmy-winning Netflix series The Crown, which follows her life from the beginning of her reign to recent times — and whose production was suspended Friday after her death.

When played by Claire Foy as a young and glamorous monarch, she is seen as finding her way in her new life, trying to maintain a happy relationship with her husband, Prince Philip. while approaching her royal duties with the sobriety of someone years older. Olivia Colman takes over as Elizabeth ages and becomes more mature and prickly, and flawed, failing initially to travel to the scene of a devastating mining tragedy in Wales and comfort the townspeople, and proving unsympathetic to Diana’s troubles with her son Prince Charles. 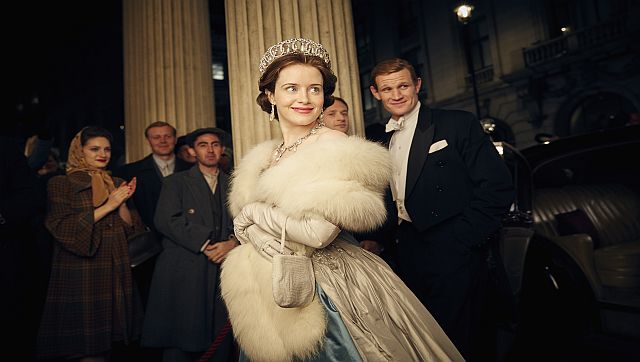 Claire Foy plays the Queen in The Crown. The early seasons depict Elizabeth II as a young and glamorous monarch, finding her way in her new life and trying to maintain a happy relationship with her husband, Prince Philip. AP

The Queen herself didn’t comment on works about her or always seem aware of cultural trends: Greeting Led Zeppelin guitarist Jimmy Page at a 2005 palace reception, she seemed unsure of who he was and what instrument he played. But she sensed her place in the world and had enough savvy to appear with Daniel Craig, in character as James Bond, for a 2012 Olympics video, and enough good humour to allow herself to be pictured parachuting from a helicopter with him (the former was really her, the latter a stunt double).

Fiction writers enjoyed setting the Queen off on unusual adventures. In Emma Tennant’s “The Autobiography of the Queen,” the monarch flees to St. Lucia in the Caribbean. SJ Bennett worked from the premise “What if the queen solved crimes?” in writing the mystery novels “The Windsor Knot” and “A Three Dog Problem.”

“She had such a unique perspective on the world. She was always looking out when everyone else was looking at her, so she must see a lot of things the rest of us don’t see,” Bennett, the daughter of a military veteran who had met the Queen, told The Associated Press.

“It was her character that fascinated me, not her position as a symbol,” she added. “She was intelligent, frequently underestimated because she wasn’t traditionally educated, and endlessly curious about people. In the books I have her eagerly looking out of the windows of Buckingham Palace while being painted for a portrait, to see what was going on outside, because that’s what she really did. She had a very wry sense of humour and a huge instinct for fun, but equally an almost supernatural instinct for diplomacy, and a world-class sense of duty.”

Musicians have paid tribute, condemned her and invoked her name for a quick laugh.

For punk and New Wave artists, she was a monument to be torn down. The Smiths’ “The Queen Is Dead” mocks the royal family and the succession to power: “I say, Charles, don’t you ever crave/To appear on the front of the Daily Mail/Dressed in your mother’s bridal veil?” The Sex Pistols helped define the punk movement in 1976 with “God Save the Queen,” in which Johnny Rotten (now Lydon) declares “No future” as he snarls out some of the most scathing, nihilistic lyrics ever to top the British charts:

God save the Queen

They made you a moron

God save the Queen

She’s not a human being …

Songwriters otherwise responded with affection. Duke Ellington met her in the late 1950s and found her “so inspiring” he soon collaborated with Billy Strayhorn on the pensive “The Queen’s Suite,” for which he arranged a single gold pressing just for her. In the late 1960s, Paul McCartney dashed off the acoustic, 23-second “Her Majesty,” with its cheeky refrain, “Her Majesty’s a pretty nice girl/But she doesn’t have a lot to say,” and the Beatles tacked it onto the end of “Abbey Road.”

As he explained in “Paul McCartney: The Lyrics,” published in 2021, he wrote the song in part because the Queen really didn’t offer many public statements, beyond her annual Christmas address and the opening of Parliament. McCartney would meet the Queen numerous times, as a Beatle and a solo performer, and even played the song for her. But he reaffirmed in his book: “She didn’t have a lot to say.”

Satyendar Jain told the court that despite Tuesday's hearing on the leak of videos of him from jail, another clipping was leaked this morning

'Stock up on blankets': Ukrainians brace for bleak winter

Gehlot, Pilot put up show of unity ahead of Rahul Gandhi's Bharat Jodo Yatra in Rajasthan

In a show of unity days after Rajasthan Chief Minister Ashok Gehlot called his former deputy Sachin Pilot a "traitor", the two leaders seemed to put their power tussle on hold as they appeared together before the cameras.