By Rami Ayyub and Nidal al-Mughrabi JERUSALEM/GAZA (Reuters) - The head of a U.N. agency that aids Palestinian refugees resigned on Wednesday, the United Nations said, amid an investigation into misconduct allegations. Commissioner-General Pierre Krahenbuhl was replaced earlier on Wednesday until a review of 'management-related matters' at the agency was completed, the U.N 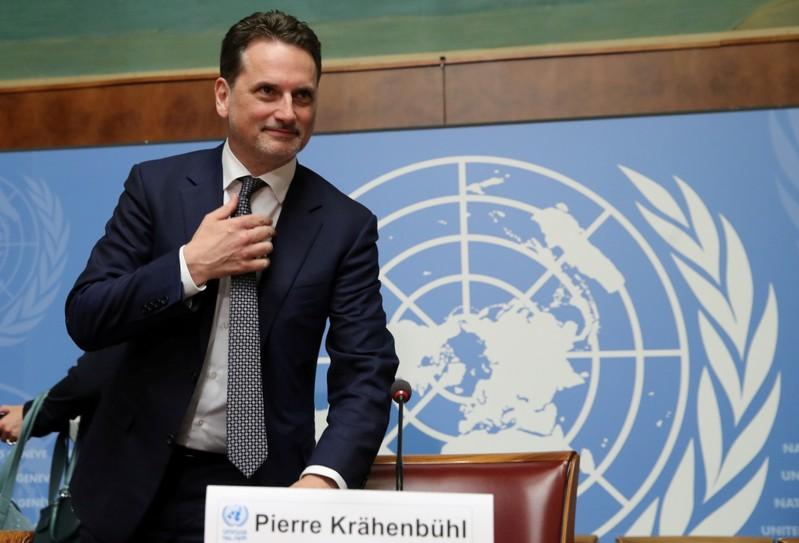 By Rami Ayyub and Nidal al-Mughrabi

JERUSALEM/GAZA (Reuters) - The head of a U.N. agency that aids Palestinian refugees resigned on Wednesday, the United Nations said, amid an investigation into misconduct allegations.

Commissioner-General Pierre Krahenbuhl was replaced earlier on Wednesday until a review of "management-related matters" at the agency was completed, the U.N. Relief and Works Agency for Palestine Refugees (UNRWA) said in a statement.

"At this time, it is vital that member states and other partners remain committed to UNRWA and the services it provides," Dujarric said.

UNRWA aids more than 5 million registered refugees in the West Bank, Gaza Strip and East Jerusalem, as well as in Jordan, Lebanon and Syria.

Guterres had earlier on Wednesday appointed Christian Saunders, the agency's acting deputy commissioner general, as officer-in-charge for the interim period.

Krahenbuhl was notified in March that an investigation was underway by the U.N. Secretariat in New York "based on allegations received against UNRWA personnel relating to unsatisfactory conduct", an UNRWA spokeswoman said.

Krahenbuhl, a Swiss national, took over the UNRWA post in 2014. He was previously director of operations at the International Committee of the Red Cross.

Dujarric said in a statement on Wednesday that the preliminary findings of the investigation by the U.N. Office of Internal Oversight Services "exclude fraud or misappropriation of operational funds" by Krahenbuhl.

"There are, however, managerial issues that need to be addressed," he said.

UNRWA has faced budgetary difficulties since last year, when the United States, its biggest donor, halted its aid of $360 million per year. The United States and Israel have both accused UNRWA of mismanagement and anti-Israeli incitement.

Switzerland, the Netherlands and Belgium have separately suspended payments to UNRWA over the management issues that are now under investigation. The agency's spokeswoman says it still needs $89 million to keep operating until the end of this year.

"It is critical for the international community to support the crucial work performed by the agency in the areas of health, education, and humanitarian assistance, which is a source of stability in a volatile region," Dujarric said.

Israel's foreign ministry said Krahenbuhl's replacement "is but the first step in a long process that is needed to eliminate corruption, increase transparency, and prevent politicization of the agency".

Danny Danon, Israel's ambassador to the United Nations, said in a statement: "There is no other solution to UNRWA except to close it."

The move drew concern from Gaza's Islamist rulers Hamas, which said it could play into upcoming discussions by the U.N. General Assembly over the renewal of UNRWA's mandate, which is up for vote every three years. UNRWA's current mandate expires next June.

More than half of the 2 million Palestinians in the Gaza Strip, whose borders are tightly controlled by Israel and Egypt, receive food aid from UNRWA.

Hamas official Bassim Naeem said the shake-up increased fears "the agency and its mandate was being targeted under American and Israeli pressure".

(Additional reporting by Michelle Nichols in the United Nations; Editing by Giles Elgood and Alistair Bell)