Hawaii community clings to life in shadow of fiery volcano

By Terray Sylvester PAHOA, Hawaii (Reuters) - When magma first began spouting like a demonic lawn sprinkler from a fissure near Mark Clawson's Hawaii home, it was exciting. But the novelty of the Kilauea volcano's eruption is wearing off for Clawson and other Big Island residents living in its shadow 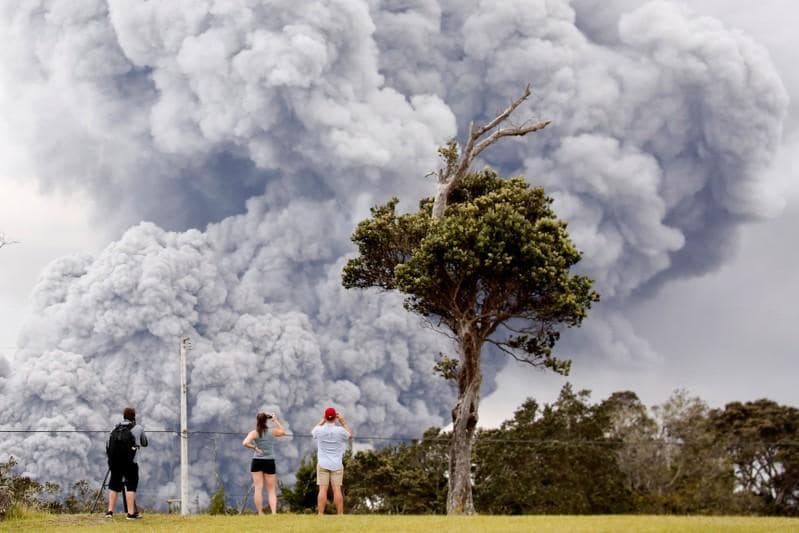 PAHOA, Hawaii (Reuters) - When magma first began spouting like a demonic lawn sprinkler from a fissure near Mark Clawson's Hawaii home, it was exciting. But the novelty of the Kilauea volcano's eruption is wearing off for Clawson and other Big Island residents living in its shadow.

"It's gotten oppressive," said Clawson, 64, a semi-retired plumber who has lived in the area for 15 years and grows fruit and macadamia nuts on his lush property. "I'm ready for it to be over."

About every 10 minutes, the fissure shoots jets of steam and smoke 20 to 30 feet (7 to 9 m) high, whining like a fighter jet. Small fires burn in the distance as the lava flow's leading edge heads toward coastal Highway 137, one of the last exit routes for 2,000 residents to the south.

Clawson does not think his house is in danger but the screeching steam and the vibration of his house from frequent small earthquakes has become "unnerving," he said.

Yet Clausen is resisting pressure from authorities to evacuate and has no plans to abandon his home, a stance shared by many others in communities 25 miles (40 km) down Kilauea's eastern side where residents are known for self-reliance and resilience.

“It's less stressful for me being here, than it would be for me being gone,” he said, not knowing whether his house and property are intact. “I feel a sense of obligation in a way. It just seems like the neighbourly thing to do.”

The eruptions from one of the world's most active volcanoes have destroyed 37 structures and forced nearly 2,000 people to flee homes many of them built themselves in the lower Puna district.

Conditions worsened on Thursday after an explosive eruption spewed ash 30,000 feet (9,144 meters) into the air and residents of the Big Island were warned to take shelter as the plume engulfed a wide area

Many residents of the Kalapana Seaview Estates housing development have already gone, worn down by constant tremors and toxic gas wafting down from a string of fissures about 4 miles north.

Among those remaining is Hazen Komraus, head of the community's housing association.

"Most who stay here do it either out of grit, lack of options or attachment," said Komraus.

The volcano's frequent eruptions since 1983 have depressed property values in the remote area and made it accessible to residents priced out of most Big Island areas.

That has made Puna district one of the fastest growing on the island, with a population of nearly 20,000 people. Old lava fields from a 1955 eruption cover large swathes of the district which boasts secluded beach parks and geothermal pools.

Homes at Kalapana Seaview collect drinking water from rainfall catchment systems, many get electricity from solar panels and vegetable and fruit farming is popular among residents who pride themselves on their ability to live "off the grid."

With tolerant attitudes and little police presence, this lower Puna area is also the destination for drifters with nowhere else to go, said Komraus.

Despite levels of sulphur dioxide that can become intolerable, people stay because they do not like the conditions at shelters, do not have friends or relatives they can live with or cannot afford to rent or buy elsewhere.

"Many scrape together enough to fly here and then can never afford to leave," Komarus said.