Washington: In a relief for Indian techies, US authorities on Tuesday said that the Donald Trump administration is not considering any proposal that would force H-1B visa holders to leave the country.

The announcement by the US Citizenship and Immigration Services (USCIS) came days after reports emerged that the Trump administration was considering tightening H-1B visa rules that could lead to deportation of 7,50,000 Indians. The reports had said it was mulling ending extensions for H-1B holders. 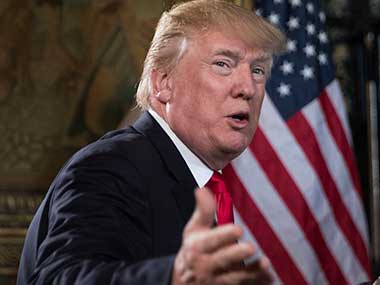 The USCIS "is not considering a regulatory change that would force H-1B visa holders to leave the United States by changing the interpretation of section certain language in Section 104C of the American Competitiveness in the 21st Century Act (AC21) statute that states that USCIS may grant the extensions," an official said.

This provides for H-1B extensions beyond the six-year limit.

"Even if it were, such a change would not likely result in these H-1B visa holders having to leave the United States because employers could request extensions in one-year increments under section 106(a)-(b) of AC21 instead," Jonathan Withington, chief of media relations at the USCIS, said in a statement.

"The agency is considering a number of policy and regulatory changes to carry out the Presidents Buy American, Hire American Executive Order, including a thorough review of employment-based visa programmes," Withington said.

The statement comes after last week's news report by US-based news agency McClatchy DC Bureau according to which the US was considering new regulations to prevent the extension of H-1B visas, the most sought after by Indian IT professionals.

The USCIS was never considering such a policy change, he said adding that "any suggestion that USCIS changed its position because of pressure is absolutely false." The reported move had been opposed by both the industry and several lawmakers.

The National Association of Software and Services Companies (NASSCOM), a trade association of Indian information technology, had warned that any disruptive move on the visa front would be detrimental for both India and the US.

The USCIS has a Congressional mandate to issue 65,000 H-1B visas in general category and another 20,000 for those applicants having a higher education – masters and above – from US universities in the field of science, technology, engineering and mathematics.

Since taking office last January, the Trump administration has been talking about cracking down on the H-1B visa scheme.

During his election campaign, Trump promised to increase oversight of our H-1B and L-1 visa programmes to prevent its abuse.