Gurdwara shooting: US Army battling racists within its own ranks

Fayetteville:  They call it "rahowa" —short for racial holy war—and they are preparing for it by joining the ranks of the world's fiercest fighting machine, the US military.

White supremacists, neo-Nazis and skinhead groups encourage followers to enlist in the Army and Marine Corps to acquire the skills to overthrow what some call the ZOG —the Zionist Occupation Government. Get in, get trained and get out to brace for the coming race war.

If this scenario seems like fantasy or bluster, civil rights organizations take it as deadly serious, especially given recent events. Former US Army soldier Wade Page opened fire with a 9mm handgun at a Sikh temple in Wisconsin on August 5, murdering six people and critically wounding three before killing himself during a shootout with police.

The U.S. Defense Department as well has stepped up efforts to purge violent racists from its ranks, earning praise from organizations such as the Southern Poverty Law Center, which has tracked and exposed hate groups since the 1970s.

Page, who was 40, was well known in the white supremacist music scene. In the early 2000s he told academic researcher Pete Simi that he became a neo-Nazi after joining the military in 1992. Fred Lucas, who served with him, said Page openly espoused his racist views until 1998, when he was demoted from sergeant to specialist, discharged and barred from re-enlistment.

While at Fort Bragg, in North Carolina, Page told Simi , he made the acquaintance of James Burmeister, a skinhead paratrooper who in 1995 killed a black Fayetteville couple in a racially motivated shooting. Burmeister was sentenced to life in prison and died in 2007.

No one knows how many white supremacists have served since then. A 2008 report commissioned by the Justice Department found half of all right-wing extremists in the United States had military experience.

"We don't really think this is a huge problem, at Bragg, and across the Army," said Colonel Kevin Arata, a spokesman for Fort Bragg.

"In my 26 years in the Army, I've never seen it," the former company commander said.

Experts have identified the presence of street gang members as a more widespread problem. Even so, the Pentagon has launched three major pushes in recent decades to crack down on racist extremists. The first directive was issued in 1986, when Defense Secretary Casper Weinberger ordered military personnel to reject supremacist organizations.

That failed to stop former Marine T.J. Leyden, with two-inch SS bolts tattooed above his collar, from serving from 1988 to 1991 while openly supporting neo-Nazi causes. A member of the Hammerskin Nation, a skinhead group, he said he hung a swastika from his locker, taking it down only when his commander politely asked him to ahead of inspections by the commanding general.

"I went into the Marine Corps for one specific reason: I would learn how shoot," Leyden told Reuters. "I also learned how to use C-4 (explosives), blow things up. I took all my military skills and said I could use these to train other people," said Leyden, 46, who has since renounced the white power movement and is a consultant for the anti-Nazi Simon Wiesenthal Center.

In 1995, eight months before the Fort Bragg murders, two former Army soldiers bombed the Oklahoma City federal building, killing 168 people. With a growing awareness of the spreading militia movement, the Pentagon in 1996 banned military personnel from participating in supremacist causes and authorized commanders to cashier personnel for rallying, recruiting or training racists.

"What's scary about Page is that he served in the 1990s when putatively this was being treated quite seriously by the military. There's plenty of other Pages who served during the war on terror, and we don't know what they're going to be doing over the next decade or so," said Matt Kennard, author of the forthcoming book "Irregular Army: How the U.S. Military Recruited Neo-Nazis, Gang Members and Criminals to Fight the War on Terror."

Kennard argues the U.S. military was so desperate for troops while fighting simultaneous wars in Iraq and Afghanistan that it allowed extremists, felons and gang members into the armed forces.

The military can grant a "moral waiver" to allow a convicted criminal or otherwise ineligible person into the armed forces, and the percentage of recruits granted such waivers grew from 16.7 percent in 2003 to 19.6 percent in 2006, according to Pentagon data obtained by the Palm Center in a 2007 Freedom of Information Act request. But the Pentagon says no waiver exists for participation in extremist organizations.

"Our standards have not changed; participation in extremist activities has never been tolerated and is punishable under the Uniformed Code of Military Justice," said Eileen Lainez, a Defense Department spokeswoman.

The Pentagon's third directive against white supremacists was issued in 2009 after a Department of Homeland Security report expressed concern that right-wing extremists were recruiting veterans returning from wars overseas.

The Pentagon's 2009 instruction, updated in February 2012, directs commanders to remain alert for signs of racist activity and to intervene when they see it. It bans soldiers from blogging or chatting on racist websites while on duty.

"This is the best we've ever seen," said Heidi Beirich, leader of the Southern Poverty Law Center's intelligence project, referring to the Pentagon's attitute. "It was really disheartening under the Bush administration how lightly they took it, so this is a major advance."

Her group monitors online chatter among self-described active-duty warriors serving overseas and reports it to military officials. It also receives regular calls from military investigators asking about racists in the service.

The Southern Poverty Law Center and the Anti-Defamation League (ADL), another civil rights monitor, have helped train officers on how to spot extremists, although Mark Pitcavage, director of investigative research at the ADL, says the military lacks comprehensive training for recruiters and commanders. He called the military's reaction when alerted to white supremacists "patchy."

"We've discovered a great range of response, from getting a phone call the next day saying, 'He's already out,' to not doing anything at all," Pitcavage said.

The Army showed Reuters a one-hour presentation it says was designed to educate soldiers and Army leaders about its extremism policy and how to respond, including to white supremacy groups. Penalties for extremist ideology may include being removed from the military, having security clearances yanked or being demoted.

"The standard hateful message has not been replaced, just packaged differently with issues like freedom of speech, anti-gun control themes, tax reform and oppression," the presentation says, noting that recruitment may be difficult to detect, occurring quietly "in bars and break areas" on bases.

In a detailed flowchart called a "Tattoo Decision Support Matrix," Army leaders are shown how to respond to various tattoos. At the time of publication, the Army was unable to identify the locations where this course was being taught.

"We're very strict on the tattoo policy here within this recruiting station," said Sergeant Aaron Iskenderian, head of the Army recruiting office in Fayetteville, the Army town next to Fort Bragg.

With the United States withdrawn from Iraq, winding down from Afghanistan and unemployment stuck above 8 percent, recruiters can be choosy again. 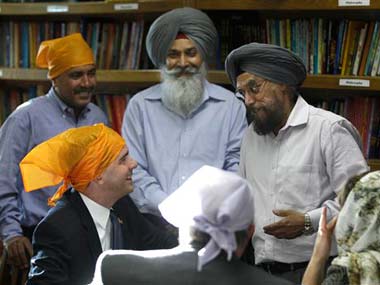 Iskenderian cited the example of a young man who came in recently with a tattoo of the Confederate flag.

"We're in the South here. It's considered Southern heritage. It's on the General Lee," Iskenderian said, referring to the car from the television show "The Dukes of Hazzard."

The potential recruit also told Iskenderian he had a black girlfriend. Iskenderian sent the issue up the chain of command, and the young man was rejected.

Academics who study white supremacists say proponents of the "infiltration strategy" of joining the U.S. military have adapted, telling skinheads to deceive military recruiters by letting their hair grow, avoiding or covering tattoos, and suppressing their racist views.

"You have to differentiate between some of the grandiose fantasies of some of the leaders of the movement and what actually is going on," cautioned the ADL's Pitcavage.

For neo-Nazis who get past the screeners, as with the gang members, the military needs a comprehensive strategy, said Carter F. Smith, a former military investigator who is now a professor of criminal justice at Austin Peay State University in Tennessee.

"They are some of the most disciplined soldiers we have. They really want to learn to shoot those weapons," Smith said. "The problem wasn't just that we were opening the floodgates to let them in. We let them out after prosecution or when their time was up and we didn't let the police know."