By Gabriella Borter and Aishwarya Nair (Reuters) - A gunman shot and critically injured two Los Angeles County sheriff's deputies as they sat in their patrol car late on Saturday in an attack that was captured on video. Footage of the incident released by the sheriff's department showed the suspect approaching the parked vehicle on foot in the city of Compton and firing with a handgun through the passenger side window before running away 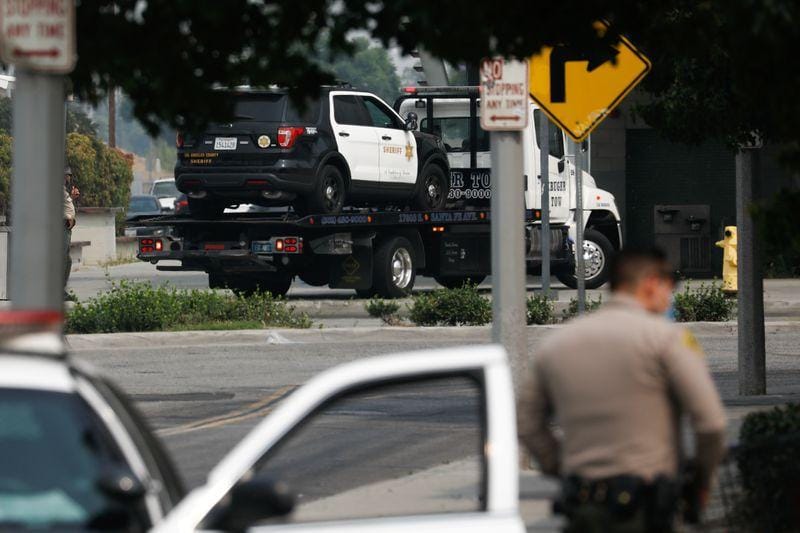 By Gabriella Borter and Aishwarya Nair

(Reuters) - A gunman shot and critically injured two Los Angeles County sheriff's deputies as they sat in their patrol car late on Saturday in an attack that was captured on video.

Footage of the incident released by the sheriff's department showed the suspect approaching the parked vehicle on foot in the city of Compton and firing with a handgun through the passenger side window before running away.

"The gunman walked up on the deputies and opened fire without warning or provocation," the department said on Twitter.

One male deputy and one female deputy sustained multiple gunshot wounds and were in critical condition undergoing surgery overnight, it said. The suspect remains at large.

"At this point we have a very, very generic description of a dark-skinned male and that came from one of the victims," Captain Kent Wegener said at a news conference.

The footage of the attack was recorded by a security camera on a nearby metro station, police said.

U.S. President Donald Trump retweeted the video early on Sunday and wrote, "Animals that must be hit hard!"

Later, referring to the deputies, Trump tweeted, "If they die, fast trial death penalty for the killer. Only way to stop this!"

A few demonstrators gathered overnight outside St. Francis Medical Center in Lynwood where the deputies were being treated, according to social media video and the sheriff's department.

"To the protesters blocking the entrance & exit of the HOSPITAL EMERGENCY ROOM yelling "We hope they die" referring to 2 LA Sheriff's ambushed today in #Compton: DO NOT BLOCK EMERGENCY ENTRIES & EXITS TO THE HOSPITAL," the department wrote on Twitter around midnight local time.

It said two people were later arrested: a man who "refused to comply & cooperate" and a reporter for NPR station KPCC. The department said the reporter did not identify herself as a member of the press.

Reporter Josie Huang said she was released from county jail on Sunday morning.

"I have seen @LASDHQ tweets and have thoughts and videos to share soon after a little rest," she wrote on Twitter.