By Josue Decavele and Gustavo Palencia GUATEMALA CITY/TEGUCIGALPA (Reuters) - The death toll from torrential downpours unleashed by storm Eta leapt on Friday as Guatemalan soldiers reached a mountain village where around 100 people were killed by a landslide, adding to dozens of other dead in Central America and Mexico. Many of those who lost their lives in the village of Queja in the central Guatemalan region of Alta Verapaz were buried in their homes after mudslides swallowed around 150 houses, army spokesman Ruben Tellez said. 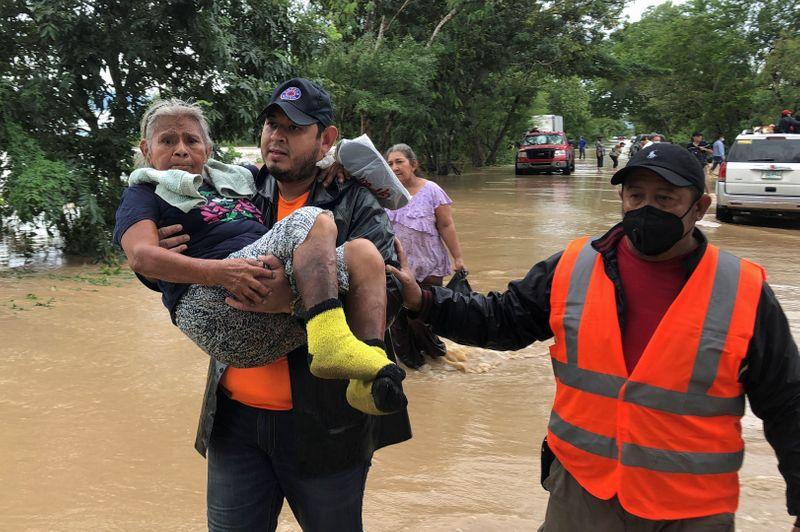 By Josue Decavele and Gustavo Palencia

GUATEMALA CITY/TEGUCIGALPA (Reuters) - The death toll from torrential downpours unleashed by storm Eta leapt on Friday as Guatemalan soldiers reached a mountain village where around 100 people were killed by a landslide, adding to dozens of other dead in Central America and Mexico.

Many of those who lost their lives in the village of Queja in the central Guatemalan region of Alta Verapaz were buried in their homes after mudslides swallowed around 150 houses, army spokesman Ruben Tellez said.

The devastating weather front brought destruction from Panama to Honduras and Mexico, which between them have registered more than 50 flood-related deaths.

Tellez said it was not the first time disaster had struck the remote corner of Alta Verapaz. The area around Queja appeared to be the site of a huge landslide on a road pass a decade ago, which killed dozens, he said.

"Now with all this phenomenon it collapsed again," he added.

Photos of the Queja landslide showed a lengthy strip of brown mud peeled from the lush green hillside. A video shared by the army showed soldiers trying to get to Queja having to haul themselves through a morass of mud with the aid of a guide rope.

The army said about 100 people are believed to have died in Queja alone, though searches for survivors continue.

Guatemalan President Alejandro Giammattei hinted the death toll could be higher, with the number of dead and missing in Queja estimated at about 150.

Footage from another part of Guatemala showed boats ferrying villagers in flooded regions and rescue workers carrying children on their backs, wading through water up to their hips.

One of the fiercest storms to hit Central America in years, Eta on Friday dumped more torrential rain across swaths of Central America. The U.S. National Hurricane Center (NHC) warned "catastrophic flooding" in the region would continue.

Rescue operations across Honduras and Guatemala have been slowed by destroyed roads and bridges, forcing authorities to bring in the military and use helicopters and speedboats to rescue people stranded on top of their houses.

"This is the worst storm Honduras has seen in decades. The damage will undoubtedly be significant," said Mark Connolly, UNICEF representative in Honduras, who estimated about 1.5 million children there will be affected.

Across the border from Guatemala in the Mexican state of Chiapas, flooding has killed 19 people, many swept up by rivers whose banks burst, state authorities said.

In Honduras, flooding has killed 23 people and two are missing, the government said. Many remained trapped on their roofs, the National Risk Management System said.

"We have been without food for two days ... waiting to be evacuated," William Santos, sheltering on top of a banana packing plant with about 300 people in northern Honduras, told Reuters.

Eta hit Nicaragua as a Category 4 hurricane on Tuesday blowing furious winds of 150 miles per hour (241 kph). It weakened to a tropical depression inland but the rain continued.

"We have a lot of people trapped we have not been able to reach," said Guatemalan President Giammattei.

The devastation harked back to Hurricane Mitch, which killed some 10,000 people in Central America in 1998.

The high winds and heavy rain have damaged thousands of homes in Honduras, Guatemala, Costa Rica and Nicaragua, whose government has not yet detailed the human cost of the storm.

Two miners were reported killed in Nicaragua, while in southern Costa Rica a landslide killed a Costa Rican woman and an American man in a house. Eight others, including at least three children, died in flooding near the Costa Rican border in Panama's Chiriqui province, authorities said.

In Honduras, about 16,000 people have been rescued in the northern Valle Sula region, authorities said. Over 5,000 people were evacuated in Guatemala, officials said.

On Friday evening, Eta was off Belize's coast in the Caribbean, churning towards Cuba and Florida, the NHC said.

But remnants of the weather system will continue to hammer parts of Central America with flooding, it added.