MADRID (Reuters) - Spain reported 3,594 new coronavirus infections on Wednesday as it struggled to contain a second wave of contagion that hit a peak of some 8,000 cases last Friday. 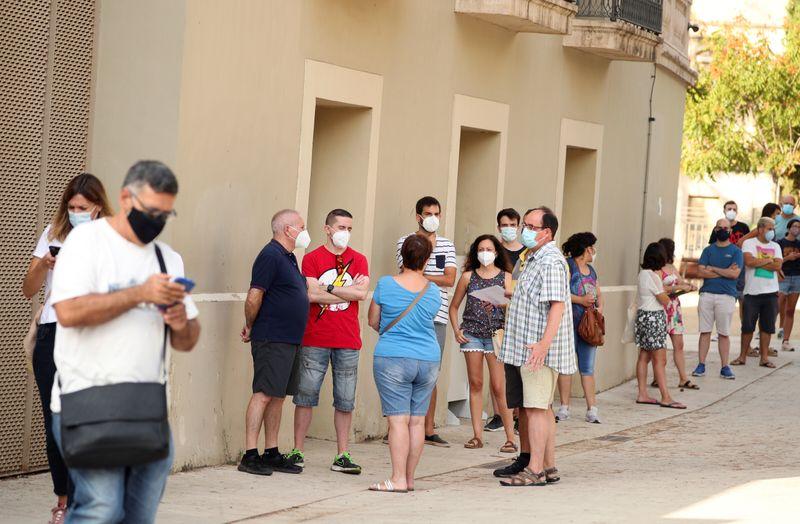 infections on Wednesday as it struggled to contain a second wave of contagion that hit a peak of some 8,000 cases last Friday.

The latest daily increase was below the roughly 4,000 cases recorded a day earlier, according to updated health ministry data, and brought the cumulative total to 419,849. Seven more deaths were recorded, pushing the overall toll to 28,971.

Accounting for 1,513 cases, the Madrid capital region was by far the hardest hit region. Separate data from regional authorities showed several municipalities with more than 700 cases per 100,000 people - more than seven times the national average for the past week.

While officials have advised residents in some areas to stay at home, the Madrid region's deputy leader said there were no plans to request a localised state of emergency under new powers granted by the central government.

"Generally speaking I'm not in favour of more lockdowns, of repeating the steps from March and April...That ended in economic ruin," Ignacio Aguado told a news conference.

He also hit out at the central government's lack of a strategy to safely reopen schools, accusing the education ministry of leaving local authorities to fend for themselves.

In the absence of national guidelines, Spain's 17 regions have been left to develop their own plans, frustrating parents and teachers and prompting students to call for three days of strikes in September.

"We're here to demand that the ministry of education does something, because we're pulling our hair out here to see they've done absolutely nothing over the past five months," student union leader Coral Latorre told state broadcaster TVE.