ATHENS (Reuters) - Greece will submit a 2020 budget later this year that will fully respect the fiscal targets agreed with its lenders, newly elected Prime Minister Kyriakos Mitsotakis said on Saturday. Outlining his main policies, Mitsotakis told Greek lawmakers that the budget would not put fiscal targets for 2019 and 2020 at risk 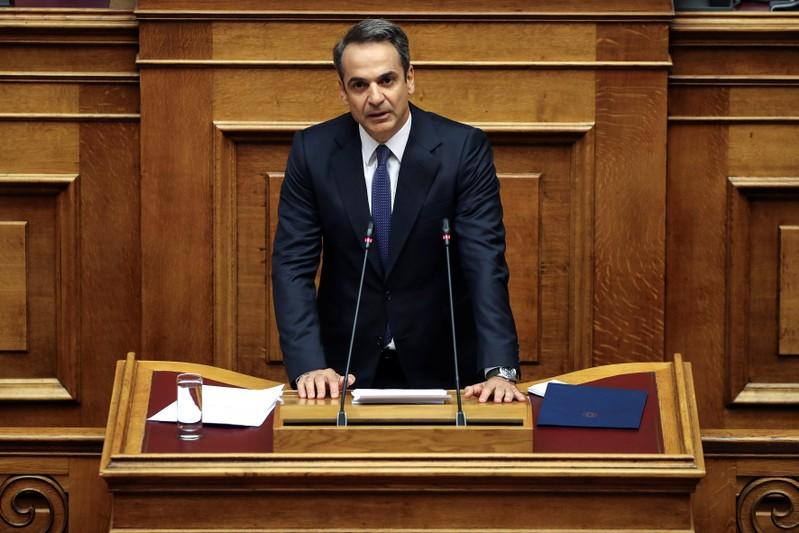 ATHENS (Reuters) - Greece will submit a 2020 budget later this year that will fully respect the fiscal targets agreed with its lenders, newly elected Prime Minister Kyriakos Mitsotakis said on Saturday.

Outlining his main policies, Mitsotakis told Greek lawmakers that the budget would not put fiscal targets for 2019 and 2020 at risk.

Greece emerged from economic adjustment programmes overseen by its lenders last August but still needs to meet fiscal targets, including a primary budget surplus -- which excludes interest payments on its debt -- of 3.5 percent of annual economic output up to 2022.

"In the draft budget for 2020, the given fiscal balance is not disrupted and the primary surplus targets for the years 2019 and 2020, agreed by the previous government, are not disputed," Mitsotakis said.

He added that his government aimed to implement bold reforms and secure credibility in the eyes of the country's partners and international investors.

Mitsotakis won the July 7 election by a large margin over former leftist prime minister Alexis Tsipras on a pledge to cut taxes and speed up investments to spur growth in a country which lost a quarter of its output during the Greek debt crisis.

He plans to reduce corporate tax to 24% on 2019 profit from 28% currently and halve taxation on dividends to 5 percent.

He also said that a highly unpopular property tax that was introduced in 2012 at the height of the crisis will be cut by an average 22% this year.