By Michele Kambas ATHENS (Reuters) - Greek Prime Minister Alexis Tsipras was struggling for his political survival on Monday after his Syriza party, hurt by austerity and a bitter rift over an accord with North Macedonia, got hammered in European Parliament elections. 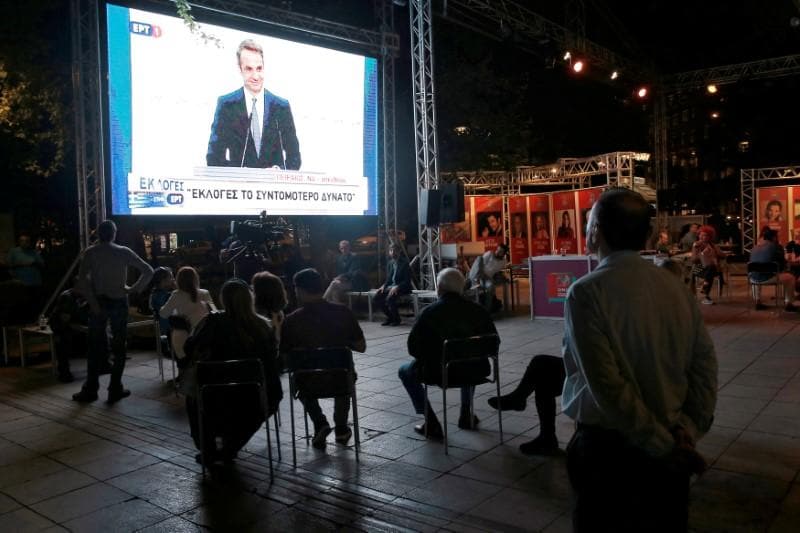 ATHENS (Reuters) - Greek Prime Minister Alexis Tsipras was struggling for his political survival on Monday after his Syriza party, hurt by austerity and a bitter rift over an accord with North Macedonia, got hammered in European Parliament elections.

His leftist Syriza, which stormed the Greek political stage in 2015 on the back of a popular backlash against painful economic reforms, suffered its first major defeat in years to the opposition conservative New Democracy party.

Smarting from the fallout, Tsipras has called snap elections, speculated to take place by June 30 at the earliest. The full term of his administration ends in October.

In his first appearance after calling the snap poll, a sombre-looking Tsipras told Syriza party faithful on Monday evening: "The crucial thing in life is not if you will fall, but if you will get up."

"I want to ask you all, today, to get up, and regroup, and fight. We very well know we can do it. Because our main strength is that we are defending what is just: our values, the values of the democratic faction and of the left."

Tsipras is the longest-serving Greek prime minister since the country lurched from crisis to crisis from the onset of financial turmoil in 2010. Political analyst Theodore Couloumbis said that while Tsipras may be hurt, he is not a spent force.

"(Syriza) will still remain at the forefront as the second-largest party," he said.

Another analyst, pollster Costas Panagopoulos from ALCO Research, said political parties that do well in European Parliament elections would do better in the national vote, meaning a projection of victory for New Democracy.

Once a leftist firebrand, Tsipras, 44, built his career as the crowd-pleaser who stood up to creditors and their austerity demands. But he was forced into a painful new bailout in 2015 months after sweeping to power, when Greece was confronted with a choice of that or being turfed out of the euro zone.

His U-turn went down badly with many voters.

Tsipras signed the so-called Prespes accord last year agreeing to a name change for its Balkan neighbour, resolving a decades-old wrangle which kept Macedonia out of the European Union and NATO. But for many Greeks, it was an unacceptable national defeat and an appropriation of Greek national heritage.

"The bailout period was also compressed, packed in to four and a half years which was like a decade (for voters). People had a lot of pent-up frustration which they didn't have an opportunity to vent at the ballot box before."

Greece emerged from close economic supervision by creditors in August 2018, and Tsipras's administration has since unwound some austerity with steps such offering pensioners additional bonuses and cutting sales tax.

But it was not enough, Couloumbis said. "People are tired of this government, and its last-minute move to buy the votes of people who have really suffered from this (crisis)."