By Vassilis Triandafyllou and Lefteris Papadimas LESBOS (Reuters) - Greek police moved hundreds of migrants stranded on the island of Lesbos into a new temporary tent camp on Thursday, more than a week after a fire razed the country's biggest migrant camp, where they had been staying. 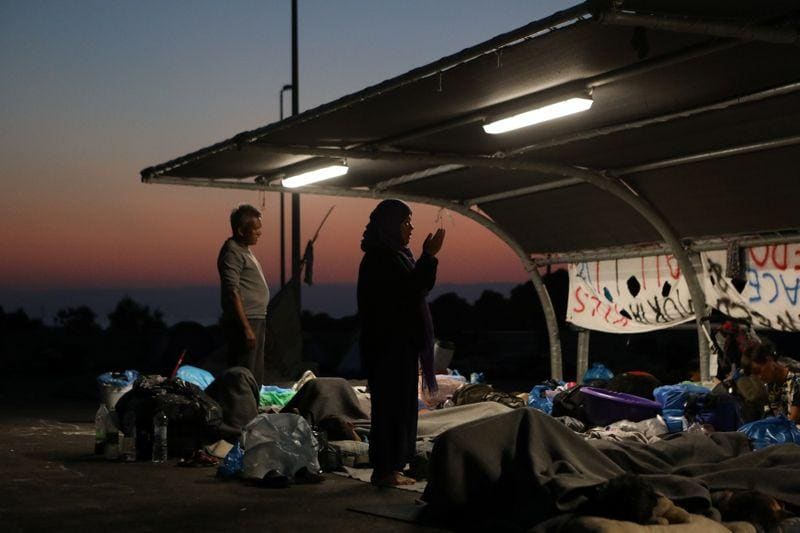 By Vassilis Triandafyllou and Lefteris Papadimas

LESBOS (Reuters) - Greek police moved hundreds of migrants stranded on the island of Lesbos into a new temporary tent camp on Thursday, more than a week after a fire razed the country's biggest migrant camp, where they had been staying.

The police operation, launched early on Thursday and including 70 female officers, was intended to provide migrants with shelter, food and to protect public health, government spokesman Stelios Petsas told reporters.

"The operation began with many officers in white body suits. Things are calm and migrants are slowly streaming into the new camp," a Reuters witness said.

The fire that gutted the Moria facility a week ago left over 12,000 people, most of them refugees from Afghanistan, Syria and various African countries, without shelter, proper sanitation or access to food and water. No one was hurt.

The new temporary tent camp at Kara Tepe, near the island's port of Mytilene, is ready to take in at least 8,000 people, but officials have said that some of the migrants were reluctant to move there as they hoped to leave the island.

For days, thousands of people have camped on the roadsides outside the temporary settlement at Kara Tepe.

On Wednesday morning, a total 1,200 people were in the camp. Later, groups of migrants carrying their luggage started walking into the tent camp, Reuters images showed.

After the police operation on Thursday, about 5,000 migrants had moved into the facility and had been tested for COVID-19. At least 135 migrants were in quarantine after positive tests, Migration Minister Notis Mitarachi said.

"We are smoothly moving into completing the resettlement of all (asylum-seekers) into this temporary facility," Mitarachi said.

Petsas said "it was a matter of a few days" for migrants to be completely resettled. [L8N2GD3PD]

Authorities believe the fire was started by migrants. Six people were arrested this week and are expected to soon respond to charges including arson, police officials have said.

Greece, which received more than 1 million asylum seekers at the peak of the migration crisis in 2015-2016, tens of thousands of whom are still waiting for their requests to be processed, repeated its call for more "tangible" European Union support.

"Our country, the Aegean islands, bore a huge burden during these five years into the migration crisis. The European Union must finally be more specific about European solidarity," Mitarachi said.

"Five islands cannot be carrying the whole burden of migrant flows into the European Union."