Greece says it's close to resuming maritime talks with Turkey

By Angeliki Koutantou ATHENS (Reuters) - Greece is close to resuming talks with Turkey over maritime zones, government spokesman Stelios Petsas said on Monday, after Ankara this month recalled an oil and gas exploration vessel from disputed Mediterranean waters in a move welcomed by Athens. NATO members Turkey and Greece bitterly disagree over maritime jurisdiction and energy exploration rights in the eastern Mediterranean, based on conflicting views about the extent of their continental shelves 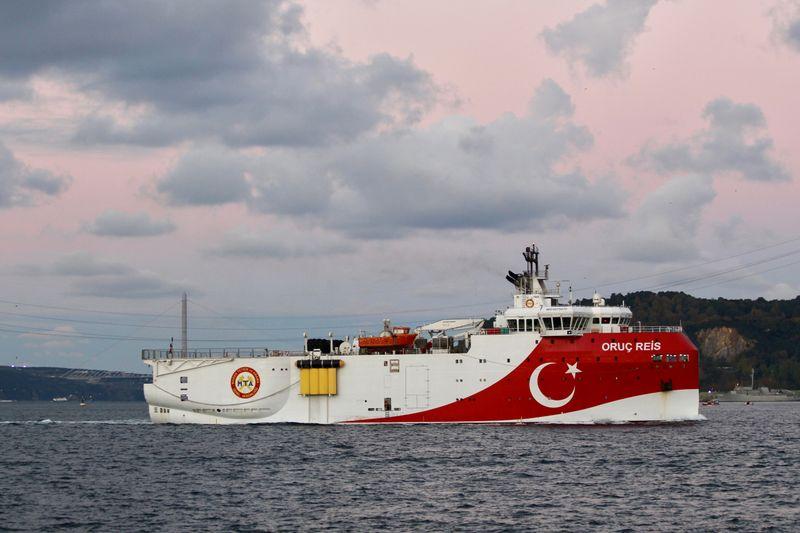 ATHENS (Reuters) - Greece is close to resuming talks with Turkey over maritime zones, government spokesman Stelios Petsas said on Monday, after Ankara this month recalled an oil and gas exploration vessel from disputed Mediterranean waters in a move welcomed by Athens.

NATO members Turkey and Greece bitterly disagree over maritime jurisdiction and energy exploration rights in the eastern Mediterranean, based on conflicting views about the extent of their continental shelves.

Turkey infuriated Greece last month when it sent the Oruc Reis seismic survey vessel to the area. Ankara says the boat has now been recalled for routine maintenance.

"We're close to resuming exploratory talks, but how soon this will happen depends on both sides, on Greece and Turkey. The sentiment is good," Petsas told reporters, adding that Ankara had also indicated its wish for a resumption of talks.

The long-running discussions between Athens and Ankara on demarcating their maritime zones broke down in 2016. Greek media say they could resume as early as this week.

Greece and its close ally Cyprus, both European Union member states, are locked in a dispute with Turkey over overlapping claims to areas believed to be rich in natural gas.

EU leaders are expected to evaluate the situation at a summit on Sept 24-25, though member states are divided over how best to proceed.

EU foreign ministers also discussed the issue at a meeting on Monday and agreed that Turkey's move to recall Oruc Reis was a first, positive step, Greek Foreign Minister Nikos Dendias said after the meeting. He added that the EU wanted Turkey to make more efforts to show it respected international law.

Turkey's presidential spokesman said on Sunday that exploratory talks could resume but that threats of EU sanctions were not helpful.

Cyprus has pressed for sanctions against Turkey, angered by Ankara's move last week to extend the operations of two vessels in Mediterranean waters off Cyprus until mid-October.,

But, underscoring Greece's milder tone following the withdrawal of the Oruc Reis, Petsas said on Monday the EU should examine ways to activate sanctions only if Turkey does not stick to its recent stance of de-escalation in the east Mediterranean.

U.S. Secretary of State Mike Pompeo is also due to visit Greece this month. He has said the United States is "deeply concerned" about Turkey's actions in the eastern Mediterrean and has urged a diplomatic end to the crisis.