Get Inked! Welcome to the world of pain-free, blood-free tattoos

Researchers at the Georgia Institute of Technology have created self-administered tattoos which cause no pain. Using microneedles, a design can be imprinted into the skin like a patch

The skin patch has microneedles that are smaller than grains of sand. Image courtesy: Georgia Tech

Is the fear of needles keeping you away from getting tattooed? Well, fret no more, as researchers at the Georgia Institute of Technology in Atlanta, United States, have developed a painless and bloodless tattoo patch.

The skin patch has microneedles that are smaller than grains of sand.  Only a few millimetres long, they contain ink that dissolves in the skin.

Let’s take a closer look at how these tattoo patches will work.

How will the patch work?

According to a report by Science Daily, microneedle tattoo patches imprint designs of letters, numbers, symbols and images when it’s pressed against the skin. Each microneedle acts like a pixel when they are arranged in a specific pattern.

Scientists start with a mould that contains the microneedles in a pattern that forms an image. These super tiny needles are filled with tattoo ink and a patch is added to enable convenient handling for users. Scientists start with a mould that contains the microneedles in a pattern that forms an image. Image courtesy: Georgia Tech

The patch is later applied to the skin for a few minutes while the microneedles work their magic in releasing the tattoo ink which dissolves in the skin without any bleeding.

Tattoo inks of various colours can be incorporated into the patch including black-light ink that glows under ultraviolet light.

The lead author of the research, Professor Mark Prausnitz said in a New York Post, “We’ve miniaturised the needle so that it’s painless, but still effectively deposits tattoo ink in the skin.” “This could be a way not only to make medical tattoos more accessible but also to create new opportunities for cosmetic tattoos because of the ease of administration,” he added.

Researchers have described each microneedle as a single pixel on a TV screen since they collectively form a large image or symbol. The tattoo patch can create designs of numbers, letters, stars, hearts or even QR codes that can be scanned by a smartphone, according to Daily Mail.

What are the benefits of tattoo patches?

As opposed to injected tattoos, the process of using patches is a lot quicker. They can be easily self-administered and don’t require a professional.

Professor Prausnitz said, “We’ve miniaturised the needle so that it’s painless, but still effectively deposits tattoo ink in the skin.”

Tattoo patches lower the risk of infection as they are less intrusive and don’t cause a lot of bruising. 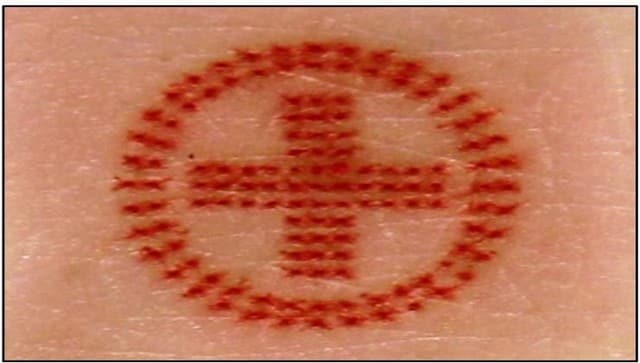 The tattoo patch can create designs of numbers, letters, stars, hearts or even QR codes that can be scanned by a smartphone. Image courtesy: Georgia Tech

These tattoos can be used to cover up scars and communicate serious medical conditions like epilepsy, diabetes or allergies. Makers have also kept in mind the privacy of some users who want to hide their tattoos unless it’s under ultraviolet lights or high temperatures.

These non-invasive tattoos can also be used on animals. Instead of clipping their ears and attaching tags which help in identifying them, vets can use the patches to imprint important information directly on the animal’s skin.

Are these tattoos permanent?

The study conducted while developing the tattoo patch revealed that the tattoos can last for at least a year and are likely to be permanent which makes them viable options for people who want a tattoo without the risk of infection or going through the pain associated with traditional tattoos.

Similarly, the microneedles can be incorporated with temporary inks for those who don’t want to regret the decision of getting a tattoo.

What are the risks involved in injected tattoos?

According to the Mayo Clinic, tattoo dyes can trigger allergic skin reactions like an itchy rash at the tattoo site or around it. Apart from skin-related issues, if the needle that is used to create a tattoo is contaminated with infected blood, a person can contract various bloodborne diseases.

Some tattoos might cause swelling or burning at the site during Magnetic Resonance Imaging (MRI) exams. In some cases, they may also affect the quality of an MRI scan.

As part of a Facebook-funded effort, a team of US researchers has developed a new cyber-security tool that discovered 11 previously unknown Internet browser security flaws.

Scientists, including one of Indian origin, have developed a new technology that can read pages of a closed book

Personal information of millions of smartphone users is at risk due to in-app advertising that can leak potentially sensitive user information between ad networks and mobile app developers, a new study has found.