BERLIN/PARIS (Reuters) - French President Emmanuel Macron called on Sunday for Germany and France to dig deeper as allies in their bid to spearhead a more united Europe, including by overcoming lingering scepticism on issues such as a euro zone budget. 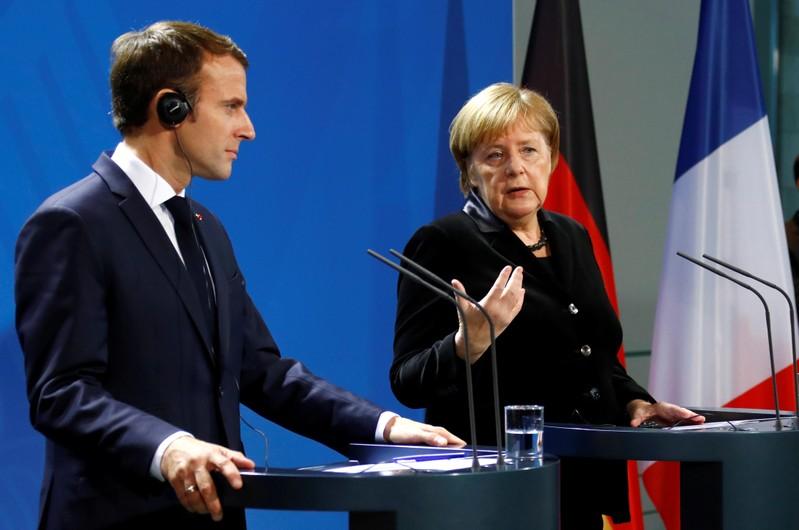 BERLIN/PARIS (Reuters) - French President Emmanuel Macron called on Sunday for Germany and France to dig deeper as allies in their bid to spearhead a more united Europe, including by overcoming lingering scepticism on issues such as a euro zone budget.

Macron has long championed a vision for a more integrated euro zone, including through a joint budget.

With European Parliament elections looming next May, the French president has also urged pro-EU forces to rally and take concrete policy steps in a bid to fend off anti-immigrant, nationalist parties on the rise in several member states.

In a speech to the German lower house of parliament on Sunday at an event honouring war victims, Macron said the onus was on France and Germany to pursue those efforts.

"This new phase can be scary as we will have to share, pool together our decision-making, our policies on foreign affairs, migration and development, an increasing part of our budgets and even fiscal resources, build a common defence strategy," Macron said at the Bundestag.

France and Germany are already expected to lay out plans on Monday for a limited joint euro zone budget, which will be focused for now solely on financing investment, according to French finance ministry sources.

That means it will steer clear for now of more controversial elements, like plans to use the budget to help euro zone countries in economic downturns.

But Macron is also pushing for progress in other areas of integration, including on plans to tax internet giants which Berlin has grown hesitant on.

Macron, who later met German Chancellor Angela Merkel in Berlin for talks, evoked a world "at a crossroad" in his speech, pitting nationalist movements "with no memory" against more modern, progressive ones.

"Europe, and within it, the Franco-German alliance, has the obligation not to let the world slip into chaos," he said.

Macron had last week warned against the perils of nationalism at commemorations in Paris to mark the 100th anniversary of the end of World War One, sparking an outcry from U.S. President Donald Trump who blasted the French leader on Twitter days later.

Earlier on Sunday Macron joined Merkel and German President Frank-Walter Steinmeier to place wreaths at the site of the Neue Wache war memorial in Berlin.

"You made clear with an impressive speech how important the German-Franco friendship and cooperation is, and what it role it plays in the European context," Merkel told Macron before their meeting at the chancellery.

"You said we are at a crossroads ... and this is exactly what I perceive," she said. "Those of us born after the war are responsible for the lessons that we learned."

Merkel said she and Macron would discuss a wide range of issues including new tax structures for the digital age, migration and efforts to expand European defence cooperation.