BERLIN (Reuters) - German police unleashed water cannon and pepper spray in an effort to scatter thousands of protesters angry about a new legal framework for enforcing coronavirus restrictions passed by parliament on Wednesday. 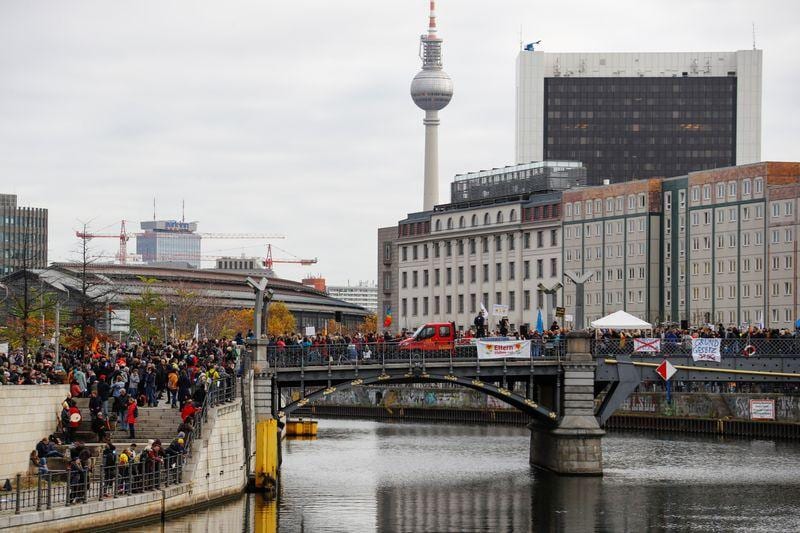 BERLIN (Reuters) - German police unleashed water cannon and pepper spray in an effort to scatter thousands of protesters angry about a new legal framework for enforcing coronavirus restrictions passed by parliament on Wednesday.

Demonstrators, including some far-right radicals, opposed legislation to enshrine in law powers to impose steps such as curbs on social contact, rules on mask-wearing, drinking alcohol in public and shutting shops.

The aim of the amendment, drawn up by Chancellor Angela Merkel's government, is to prevent legal challenges to the measures that have so far mostly been enforceable at the state or local level.

Although most Germans accept the latest "lockdown light" to curb the spread of the novel coronavirus in a second wave, critics say the amendment endangers citizens' civil rights.

The far-right Alternative for Germany (AfD) has compared the amendment with the 1933 Enabling Act that paved the way to Hitler's Nazi dictatorship.

Protesters, whistling and banging saucepans, were neither keeping the required social distance nor wearing face masks. Some held banners with slogans such as "Stop the corona pandemic lie" and "No to forced vaccinations".

Health Minister Jens Spahn told parliament no one would be forced to be vaccinated and described the pandemic as a "once in a century phenomenon".

During mass marches against coronavirus curbs in August, protesters stormed the steps of the Reichstag parliament building. In embarrassing images that went around the world, some protesters waved the far-right Reichsflagge flag.

Europe's largest economy kept infection and death rates below those of many of its neighbours during the first phase of the crisis, but is now in the throes of a second wave in Europe.