By Bill Trott (Reuters) - Chuck Yeager, the steely 'Right Stuff' test pilot who took aviation to the doorstep of space by becoming the first person to break the sound barrier more than 70 years ago, died on Monday at the age of 97. Yeager's death was announced on his twitter account by his wife, Victoria 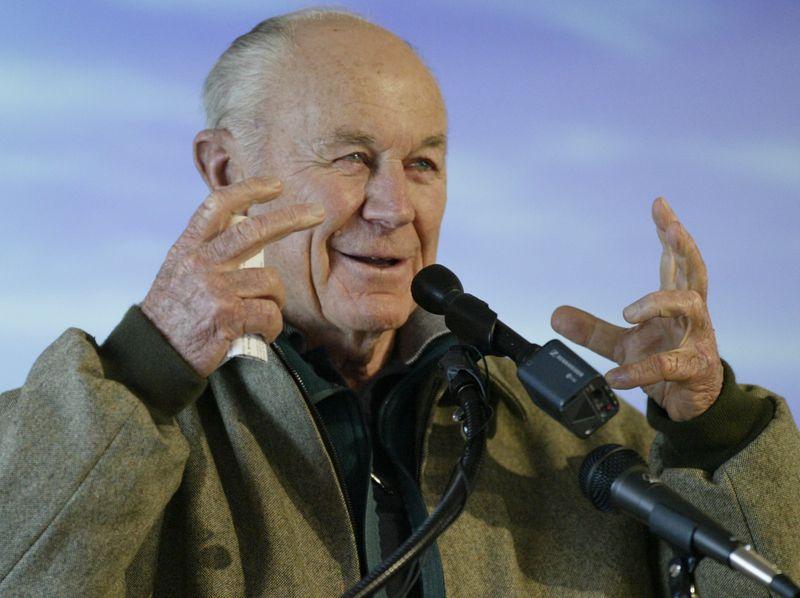 (Reuters) - Chuck Yeager, the steely "Right Stuff" test pilot who took aviation to the doorstep of space by becoming the first person to break the sound barrier more than 70 years ago, died on Monday at the age of 97.

"It is w/ profound sorrow, I must tell you that my life love General Chuck Yeager passed just before 9pm ET. An incredible life well lived, America’s greatest Pilot, & a legacy of strength, adventure, & patriotism will be remembered forever," Victoria Yeager said in the tweet.

Yeager, an unlikely candidate to become one of the most famous aviators in history, joined the U.S. Army Air Corps in 1941 just to work on the engines of airplanes, not to fly them. His first plane ride made him throw up.

Yeager was passed over for the burgeoning U.S. space program because he never went to college but he was hardly heartbroken not to become an astronaut. He considered them mere passengers "throwing the right switches on instructions from the ground."

Author Tom Wolfe was so impressed by the mien of the rough-hewn man from Hamlin, West Virginia, that he made Yeager a prominent character in "The Right Stuff," his 1979 book about the early days of the space program.

Wolfe said Yeager was blessed with "the right stuff" that made him a legendary test pilot but Yeager said it was more a matter of luck, better-than-average vision and a thorough knowledge of his planes.

Those attributes served Yeager well in World War Two. Flying a P-51 Mustang named Glamorous Glennis in tribute to his girlfriend, Glennis Dickhouse, he was credited with 12 "kills" of German planes - including five in a single dogfight.

After the war he became a test pilot and was assigned to Muroc Air Force Base in California as part of the secret XS-1 project, which had a goal of hitting Mach 1, the speed of sound. Yeager was a 24-year-old captain, testing out a dozen planes a week, when he first outraced sound on Oct. 14, 1947, in the bright orange Bell X-1 craft.

NOT DETERRED BY BROKEN RIBS

He had broken two ribs in a horseback riding accident a few days before but did not tell his superiors for fear they would ground him. Because of the pain, he had to use a sawed-off broomstick to close the X-1's cockpit before takeoff.

He then calmly brought the craft, which was also named for Glennis, who was by then his wife, gliding down to a dry lake bed, 14 minutes after it had been cut loose on a flight that was a significant step toward space exploration.

Yeager said he had noted a Mach 0.965 reading on his speedometer before it jumped off the scale without a bump.

"I was thunderstruck," he wrote in his 1985 autobiography "Yeager." "After all the anxiety, breaking the sound barrier turned out to be a perfectly paved speedway."

Yeager was unfazed by having a job that took him to the brink of death with every outing - such as the 1953 flight on which he safely landed his X-1A after hitting Mach 2.4 and then losing control of the aircraft for 51 seconds.

"It's your duty to fly the airplane," he told an interviewer. "If you get killed in it, you don't know anything about it anyway so why worry about it?"

Charles Elwood Yeager was born in Myra, West Virginia, on Feb. 13, 1923, one of five siblings. As a schoolboy, he liked math and could type 60 words per minute - an indication of the hand-eye coordination that would serve him so well in the cockpit.

Yeager had no interest in airplanes as a youth - he did not even see one until he was 18, when he joined the U.S. Army Air Corps to be a mechanic.

In the early 1960s, he was in charge of astronaut-style training for Air Force personnel but that program ended when the U.S. government decided not to militarize space. Still, 26 people trained by Yeager went into orbit as NASA astronauts.

Yeager reached the rank of brigadier general and in 1997 he marked the 50th anniversary of his historic flight by taking an F-15 past the speed of sound. He then announced that it was his last military flight.

Yeager became something of a social media sensation in 2016 at age 93 when he began fielding questions from the public on Twitter and responding in a curt and sometimes curmudgeonly manner. When asked what he thought about the moon, he replied, "It's there."

Yeager and Glennis, who died of cancer in 1990, had four children. He married Victoria Scott D'Angelo in 2003.