Gaza in lockdown to contain its first COVID-19 outbreak

By Nidal al-Mughrabi GAZA (Reuters) - Gaza was in lockdown on Tuesday after the first cases of COVID-19 in the general population of the Palestinian enclave, whose restricted borders until now had helped spare it from an outbreak. Health authorities in the Hamas-controlled territory are concerned over the potentially disastrous combination of poverty, densely populated refugee camps and limited hospital facilities in dealing with an outbreak 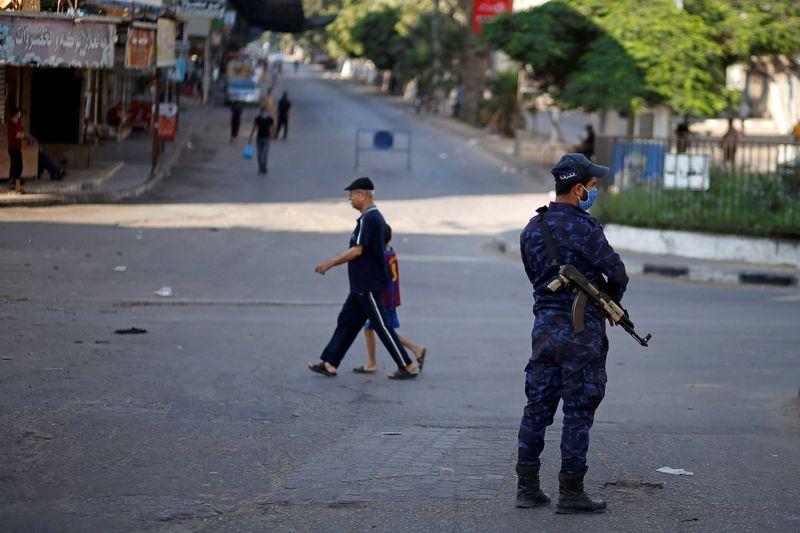 GAZA (Reuters) - Gaza was in lockdown on Tuesday after the first cases of COVID-19 in the general population of the Palestinian enclave, whose restricted borders until now had helped spare it from an outbreak.

Health authorities in the Hamas-controlled territory are concerned over the potentially disastrous combination of poverty, densely populated refugee camps and limited hospital facilities in dealing with an outbreak.

A government spokesman said the four cases were uncovered after a woman travelled to the West Bank, where she tested positive. Four members of her family then tested positive in Gaza, the first cases outside quarantined border facilities.

Interior Ministry spokesman Eyad al-Bozom said the family had been in contact with many other people in the Maghazi refugee camp in central Gaza, and that the camp was now isolated from the rest of the 360 sq. km. territory.

"Pandemic investigation committees are conducting the necessary tests to follow up the conditions of the infected four people and those who had come in contact with them," he said.

Businesses, schools and mosques were shuttered late on Monday, and the enclave's streets were largely deserted as police broadcast loudspeaker warnings to obey a 48-hour curfew.

"The movement of people is prohibited except in extreme necessity. When forced to move for an urgent matter people must wear face masks," said a health ministry statement. It warned of "legal measures" against violators.

With Israel and Egypt maintaining tight restrictions along the coastal enclave's fortified frontier, most Gazans have little access to the outside world, and hospitals often complain about shortages of medical supplies. The two countries cite security concerns over Hamas for the blockade.

"What happens if one of us gets infected?" asked Khaled Sami, a Gaza resident. "When people are seriously ill, they send them into Israel, the West Bank or Egypt. Everything is closed now and who is going to open the gate for someone suffering from the coronavirus?"

On Tuesday, the World Health Organization said Gaza's hospitals currently have capacity for 350 COVID-19 patients for a population of two million.

"That way doctors can identify if they have symptoms, and they won't rush to hospitals and risk infecting everyone there," he said.

"We are staying in the hospital for your sake. Stay home for us," ran one post alongside photographs of Gaza doctors.