The communal tension in England’s Leicester has now gripped Smethwick, a town in West Midlands, England

Reports emerged of a 200-strong mob of Muslims allegedly gathering outside a Hindu temple in Smethwick and chanting “Allahu Akbar”. Videos show a large crowd marching toward the Durga Bhawani Hindu centre; several from the mob were seen climbing the temple’s walls.

Bottles were thrown toward the temple premises and demonstrators hurled threats and abuses at temple officials, reports CNN-News18.

First Leicester, now Smethwick. Where next?

Around 200 people marching towards the Durga Bhawan Hindu Centre.

It is clearly intimidating and frightening for local Hindus.

The security services need to crackdown on these anti-Hindu thugs. pic.twitter.com/okafSjDsaR

The unrest between Hindus and Muslims, which started after India vs Pakistan cricket match, in Leicester seems to be spreading.

The situation worsened after a Hindu temple was vandalised. One flag outside the Shivalaya temple in Belgrave Road was removed while the other was burned, according to a report in The Guardian.

The temple incident is the latest in a series of attacks, which first started following the Asia Cup game on 28 August.

Also read: Why Hindus and Muslims are fighting on the streets of UK’s Leicester and who started it?

Even as community leaders appealed for harmony, an MP from Leicester East warned that violent clashes between groups, mainly Hindu and Muslim young men, will spread beyond the city to other towns and cities if there isn’t an intervention from the central government and the police.

Claudia Webb said that “toxic extremism” has no place in a civil society. “Our communities in Leicester stand united against it,” she wrote on Twitter.

This weekend we have seen unacceptable hate-driven violence.

Ours is a community of deep faith. Our unique cultural diversity is our strength.

Right-wing fascism and toxic extremism have no place in a civil society. Our communities in Leicester stand united against it.

However, this is not the first time temples or religious places have been a target of radicals. We take a look at some recent incidents of desecration, vandalism, and more from across the world.

Last week, on 15 September, a Hindu temple was defaced with anti-India graffiti in Canada.

The gates of BAPS Swaminarayan Mandir in Toronto, one of the largest temples in Canada, were spray-painted with the words “Khalistan zindabad” and “Hindustan murdabad” in what is being looked at as an incident of hate crime.

The High Commission of India condemned the incident and asked Canadian authorities to investigate it and take prompt action against the perpetrators.

The armed miscreants barged into the Catholic Church at Thakkarpura village near Patti town late at night and tied the hands of the security guard on duty. They desecrated the located at the front side of the church, with an axe and escaped, according to a report in Hindustan Times.

In July 2022, a temple, shops and homes of several Hindus, a minority in Bangladesh, were vandalised in the southwestern part of the country over a Facebook post that allegedly belittled Islam.

The attackers reportedly threw bricks at a temple in a village and broke furniture inside it. Visuals of the incident which surfaced on social media show burning buildings.

Homes of minority Hindu community have been attacked in Bangladesh's Narail District over a facebook post. Bangladesh media has reported that the attack has drawn widespread condemnation, including by Bangladesh Udichi Shilpigoshthi (largest cultural organization of the country) pic.twitter.com/pcCmWnatKw

A mob of 200 people allegedly vandalised the ISKCON Radhkanta temple in Bangladesh’s Dhaka in March 2022. When devotees were preparing for Gaura Purnima celebration, the mob entered the premises of Shri Radhakanta Temple, Dhaka, and attacked them. Three were injured in the scuffle, according to ANI.

Another ISKCON temple was vandalised in Noakhali city in Bangladesh on 16 October 2021, where one devotee was killed. The United States had back then condemned the attacks on the Hindu community in Bangladesh and said, “Freedom of religion or belief is a human right.”

Temples damaged and demolished in Pakistan

In August 2021, a Ganesh temple in the village of Bhong in Punjab’s Rahim Yar Khan district was severely damaged in an attack by a mob of about 250 people. The incident occurred after a minor Hindu boy accused of desecrating a local madrassa was released on bail. Not only was the temple vandalised, but most of the Hindu families in the village were forced to leave their homes, according to a report in The Wire. 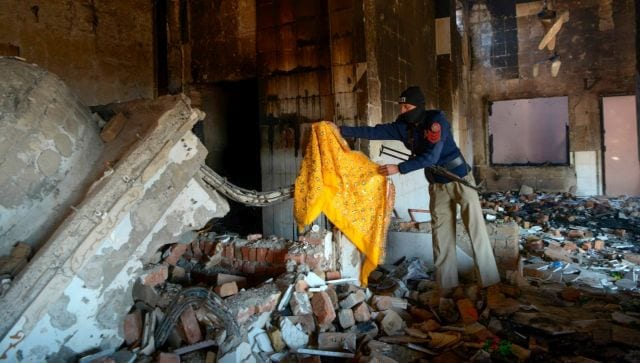 From January 2020 to August 2021, around eight Hindu temples in Pakistan were attacked or damaged. Only two of these incidents were reported in the news. AFP

In December 2020, a century-old Shri Param Hans Ji Maharaj temple in Teri village in Khyber Pakhtunkhwa’s Karak district was vandalised and demolished by a mob led by local clerics belonging to the Jamiat Ulema-e-Islam Fazl.

From January 2020 to August 2021, around eight Hindu temples in Pakistan were attacked or damaged, The Wire report says. Of these several attacks, only the Bhong incident and the one on the temple in Karak made national news.

Mosques set on fire in France

In May 2021, in a series of incidents of Islamaphobia in France, a mosque was set ablaze. A person reportedly poured gasoline and set fire to the gate of the building. However, no one was injured in the incident in Albertville in the southeastern part of the country.

In another incident in Rennes, a city in northwestern France, the walls of a mosque and Islamic centre were defaced with slogans such as “Wake up France”, “We warned you, immigration kills” and “No Islamisation”.

According to reports, racist attacks targeted two other mosques in the cities of La Mure and Domene. On the wall of the mosque, Islamophobic graffiti such as “Muslims are harmful" was written.

There was a string of such acts of vandalism on other mosques across France last year. Muslim faithfuls in Rome hold a protest against rising cases of Islamophobia across the world. AFP

In May 2021, a mosque in New York was sprayed with anti-Palestine graffiti on Eid. “Death 2 Palestine” was written on the front, reports CNN.

The graffiti was immediately reported to the police and was investigated as a hate crime.

Temple spray-painted with crosses in the US

In January 2019, a deity at the Swaminarayan Temple in Kentucky, United States was sprayed with black paint and the walls of the temple were defaced with obscene messages in an incident of hate crime.

A 17-year-old white male was arrested for the incident and is believed to have acted alone. Temple members found their place of worship desecrated with what police said were hate-filled religious phrases and black crosses. A knife had been stabbed into a chair and several doors were broken down, according to a CNN report.

Religious places and the rise in hate crimes

According to a piece in The Conversation, “Houses of worship have long been flashpoints for religiously and ideologically motivated violence. But recent attacks are symptomatic of a rise in hostility directed at others on the basis of their religion.”

“The perception of houses of worship as gathering places and for ethnic and religious others also increases their symbolic value as targets for politically, religiously and ideologically motivated assailants.”

Parliament has all the authority to repeal the Places of Worship Act, whenever it may want to

Top court observed that the present case is between two segments of the same Tapagacch denomination. Petitioners invoking the Places of Worship Act 1991 is not ground enough to entertain a petition under Article 32 of the Constitution

US city sued for denying permission to build mosque

The US federal government has sued the small north-metro city of St. Anthony in the state of Minnesota for violating a law by rejecting permission for a proposed mosque