From 'see you soon' to call for 'unity': How America's transfer of power played out on TV

By Helen Coster (Reuters) - America’s division was in sharp relief on cable TV on Wednesday during the inauguration of U.S. President Joe Biden and his speech on the steps of the Capitol. What CNN Political Correspondent Abby Phillip described as 'an invitation to decency, to civility' from the Democrat, right-wing media favorable to Republican Donald Trump during his term dismissed as hypocritical - or ignored altogether 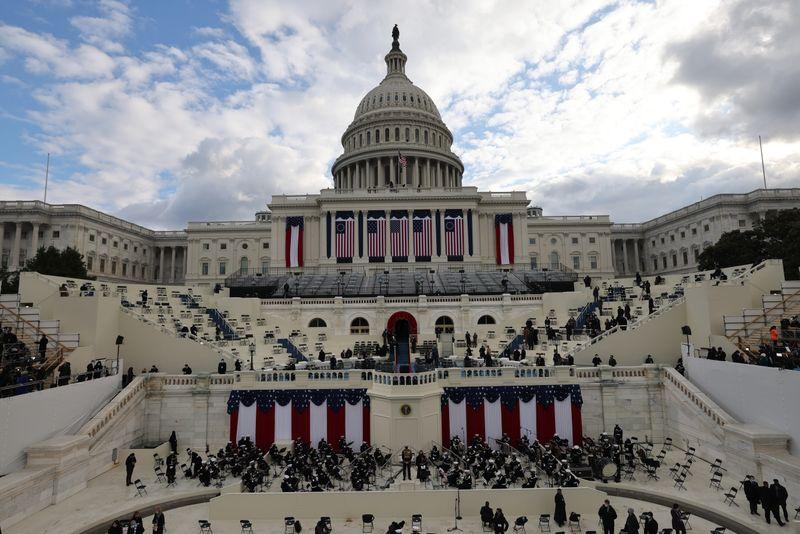 (Reuters) - America’s division was in sharp relief on cable TV on Wednesday during the inauguration of U.S. President Joe Biden and his speech on the steps of the Capitol.

What CNN Political Correspondent Abby Phillip described as "an invitation to decency, to civility" from the Democrat, right-wing media favorable to Republican Donald Trump during his term dismissed as hypocritical - or ignored altogether.

Conservative news channel Newsmax host Tom Basile described Biden’s address, in which he urged the country to seek "unity" and end an "uncivil war," - as "very dark," "not unifying," and "quite divisive."

Another conservative outlet, One America News Network (OAN), skipped covering the inauguration. While other networks were airing a live feed, OAN featured a pre-recorded segment called “Trump: Legacy of a Patriot.”

“We here at One America News want to look back at everything President Trump has achieved and thank him for his hard work serving the American people,” commentator Pearson Sharp said.

Sharp later added: “Trump’s stunning successes have come despite an onslaught from the rabid left-wing media which has maintained a one-sided perspective from day one.”

Host Chris Wallace described Biden's speech as "the best inaugural address I ever heard," with conservative political contributor Karl Rove calling it a "great speech for the moment."

Trump had ramped up his criticism of Fox News after its early projection on election night that Biden had won the pivotal state of Arizona. For months Trump falsely claimed the Nov. 3 election was rigged and he neither formally conceded to Biden nor attended Wednesday's inauguration.

Fox News contributor Katie Pavlich struck a cautious tone. "Yes, we have just watched what President Joe Biden had to say to the country about unity ..." Pavlich said. "But it's very difficult to reconcile unity with very deep disagreements when it comes to policies and how to move the country forward.”

Earlier in the day, networks favorable to Trump lamented his departure, focusing on how he delivered a populist message and pushed the speedy development of coronavirus vaccines. Trump glossed over the risks of the virus while in the White House as the death toll rose to more than 400,000 in the United States.

On Fox News, host Bill Hemmer reflected on the farewell address Trump released on video and the Jan. 6 storming of the U.S. Capitol by pro-Trump rioters that the House of Representatives has impeached him for on a charge of incitement.

“What if you could rewind the hands of time, and what if ... he could’ve delivered that same message (as his farewell speech) on the week of Nov. 9?” Hemmer asked. “What could have been if that moment (the storming of the U.S. Capitol) did not take place in Washington?”

Networks viewed as the opposition to Trump, including CNN and MSNBC, continued their criticism of him.

MSNBC’s “Morning Joe” host Joe Scarborough recounted Trump’s rise in stark terms. “He was friends with Bill and Hillary Clinton and made contributions to Democrats, but he saw an opening with a racist conspiracy theory called 'birtherism' and targeted a party that was more vulnerable than expected."

Newsmax and OAN hosts spoke of Trump’s detractors and his political future.

"It seems like the establishment, in many respects, many in D.C., many in the elite, the media elite so to speak, they ultimately just couldn’t square with that and they just didn’t like him," Finnerty said.

Before boarding Air Force One en route to Florida, Trump teased a return: “So, have a good life. We will see you soon.”

(This story has been refiled to correct punctuation in headline)