From power lunches to plywood: Vandalized Washington boards up business

By Jonathan Landay WASHINGTON (Reuters) - Days after outbursts of arson and vandalism struck downtown Washington following peaceful protests against police brutality, the largely deserted heart of the U.S. capital resembles a city girding for a hurricane. For block after block, office buildings and windows of upscale restaurants that cater to lobbyists, lawyers and business executives are being sheathed in plywood. 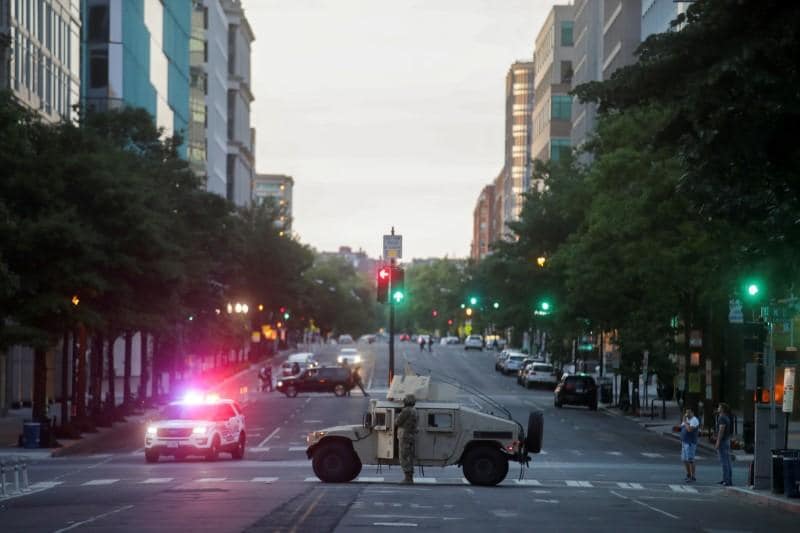 WASHINGTON (Reuters) - Days after outbursts of arson and vandalism struck downtown Washington following peaceful protests against police brutality, the largely deserted heart of the U.S. capital resembles a city girding for a hurricane.

For block after block, office buildings and windows of upscale restaurants that cater to lobbyists, lawyers and business executives are being sheathed in plywood. Traffic, thinned by a two-month coronavirus

lockdown, remains sparse and the outdoor patios of sandwich shops and bars are empty of lunch-time crowds.

Near the White House, a row of scorched umbrellas, their fire-blackened ribs resembling huge fish skeletons, sit outside the shuttered Sofitel hotel, blocks from where thousands of demonstrators gather daily.

They are protesting the death of George Floyd, an unarmed black man who died last week after a white Minneapolis policeman knelt on his neck, igniting nationwide marches against police brutality.

The protests and the pandemic have dealt a one-two punch to the normal thrum of Washington just as they have to cities and towns across the United States.

But the mayhem in Washington starting on Saturday night has brought military helicopters into the capital's skies and a curfew. Downtown streets and national monuments are crowded with armor-clad law enforcement officers and National Guard not seen since rioting over the 1968 assassination of civil rights leader Martin Luther King Jr. left whole blocks ruined.

“I do a lot of work on this building, but I never thought I’d be doing this,” said Samuel Jimenez, 48, as he labored in the sweltering heat, cutting plywood sheets to fit over the windows of a Bank of America across from a White House office annex. “We never thought this would happen.”

As President Donald Trump remained in a darkened White House on Sunday night, events again took a violent turn, with some individuals starting a fire across the square at the historic St. John's Episcopal Church and smashing windows at the luxury Hay-Adams hotel.

Looting and window-smashing spread to other areas of the city, including the upscale Georgetown neighborhood. National monuments were defaced with graffiti. “We are unarmed” and other slogans were spray-painted on the U.S. Treasury next to the White House.

By Tuesday, the violence had subsided, but businesses were not taking chances.

Taylor Patterson, a 21-year old Washington native who works for a downtown improvement group named after the “Golden Triangle,” the city’s 43-square-block core, was scrubbing graffiti from traffic signs. “I’ve never seen anything like this before. The world can change so quickly."

Plywood sheeting covered the windows of most stores, hotels and restaurants along the K Street corridor, which houses some of the country’s most powerful lobbying firms. But there were exceptions.

As a customer sat for a haircut, Serena Chreky, who co-founded the Andre Chreky hair salon with her husband, said they supported the demonstrations and would not cover the windows.

“My husband said: ‘I can’t breathe if I can’t see the street,’” she said, echoing Floyd’s gasping words as recorded in the video of his arrest that demonstrators adopted as a slogan. “We think it would send the wrong message if we boarded up the building.”

It is not a message that Brian Mulholland shares.

Mulholland was one of only two people sitting at sidewalk tables outside a McCormick and Schmick’s Seafood & Steaks. Nursing a martini, he heaped scorn on the protesters and the arson and looting, which he said “are destroying this city.”

“There is a way to voice that. It’s called the election.”