From Madrid to Miami, Venezuelan migrants seethe at Maduro yet sit out vote

By Alexandra Ulmer, Angus Berwick and Mitra Taj CARACAS/MADRID/LIMA (Reuters) - Often arriving thin and penniless in South American capitals after long bus trips across the continent, many Venezuelan migrants blame President Nicolas Maduro for the crushing economic crisis that forced them to flee. Yet, despite their anger, many in Venezuela's fast-growing diaspora plan to abstain from Sunday's presidential election, saying it is a sham vote designed to legitimize another six years in power for Maduro's socialist government. 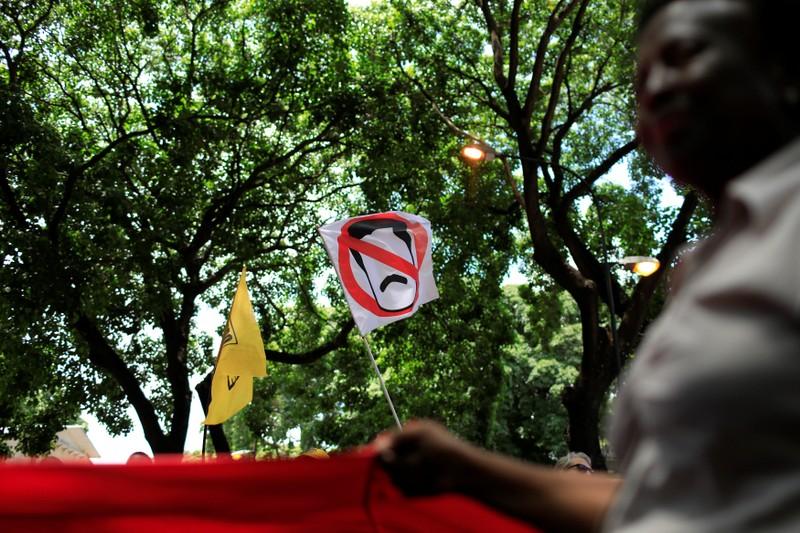 CARACAS/MADRID/LIMA (Reuters) - Often arriving thin and penniless in South American capitals after long bus trips across the continent, many Venezuelan migrants blame President Nicolas Maduro for the crushing economic crisis that forced them to flee.

Yet, despite their anger, many in Venezuela's fast-growing diaspora plan to abstain from Sunday's presidential election, saying it is a sham vote designed to legitimize another six years in power for Maduro's socialist government.

In dozens of interviews from Spain to the United States, Venezuelans abroad said they were pessimistic that Maduro would accept defeat at the ballot box. The former union leader has ruled the OPEC nation with an increasingly authoritarian hand since 2013, crushing opposition protests and jailing opponents.

Some of those who hoped to vote for Maduro's low-profile challenger, former state governor Henri Falcon, said they were facing ever more obstacles to register at consulates, including a requirement that they prove residency in their adoptive country.

Venezuela's Information Ministry, which handles media requests for the government, did not respond to a request for comment on voting conditions abroad.

Some opponents and academics say up to 4 million people - from a population of around 30 million - have fled Venezuela since Maduro's predecessor and mentor, Hugo Chavez, won power two decades ago. The government dismisses that as exaggeration.

Yet despite their swelling numbers, Venezuelan emigres are unlikely to have a major impact on the election, which has been boycotted by the mainstream opposition parties and condemned by Washington.

"I have not heard of anyone trying to register," said Garrinzon Gonzalez, executive director at the Venezuelan Union in Peru, which provides assistance to migrants.

Critics say Maduro has used state handouts of food to sway the vote of Venezuelans living hand-to-mouth due to salary-destroying hyperinflation, as well as coercing roughly 2.8 million state employees to vote for his government.

A compliant electoral council and a ban on the most prominent opposition politicians have further boosted Maduro.

Venezuela's socialist government says a succession of electoral victories since 1998 indicate it has popular support. Officials say the opposition's boycott is anti-democratic and accuse Maduro's rivals of sitting out the vote because they would lose.

There is no official data on the numbers of Venezuelans who have emigrated since Chavez launched a leftist "revolution" two decades ago in the once-prosperous nation.

According to the United Nations, nearly 1 million Venezuelans left between 2015 and 2017. Anecdotally, the trend seems to have accelerated this year.

An earlier wave of emigration saw many professionals leave by plane to Miami or Madrid with their savings intact.

But increasingly impoverished Venezuelans are fleeing by bus or on foot to neighbouring Colombia and Brazil, as well as Argentina, Chile and Peru, where they often take https://www.reuters.com/investigates/special-report/venezuela-bus low-paid jobs as waiters, construction workers or drivers.

Ignacio Avalos, one of the directors of the Venezuelan Electoral Observatory, an independent local election monitoring group, estimates that less than 10 percent of Venezuelans abroad are registered to vote.

Authorities did not respond to questions about how many overseas voters are registered. Authorities said earlier this year that more than 100,000 Venezuelans were registered to vote abroad.

In a report this month, the Observatory cited numerous obstacles hindering Venezuelans overseas from voting, including short opening hours at consulates, long backlogs and arbitrary conditions not demanded by law.

"Without a doubt this is the hardest time to be voting from abroad," Avalos said.

Maduro did order in February the reopening of Venezuela's consulate in Miami, saying that he wanted the local Venezuelan community to able to enroll to vote. Chavez had shuttered the consulate in 2012 just before his final presidential election.

The consulate did not respond to a request for information about whether it had reopened.

Two of the Venezuelans Reuters spoke to said they had no trouble registering to vote from abroad, although both did the process well before this electoral cycle.

In Madrid, several Venezuelans interviewed said the electoral register did not allow them to change their old addresses and that appointments at the embassy were near impossible to get.

"No-one goes in there, not even God," said Vanessa Pineda, the head of a Spain-based Venezuelan opposition group.

The embassy did not respond to an emailed request for information.

Maduro often disparages Venezuelans abroad, accusing them of being part of a "squalid" right-wing plot vying to discredit his brand of "21st century socialism." He has mocked emigres for working in low-paying jobs.

"I would never leave," he added.

A minority of Venezuelan opposition figures think it is a mistake not to fight Maduro at the polls, as that almost certainly hands him a fresh six-year term.

"This could be our last chance to halt the crisis that keeps catapulting more and more Venezuelans into exile," said lawyer Victor Sulbaran, 28, who in January emigrated to the U.S. state of Georgia.

A long-time activist for opposition candidate Falcon, Sulbaran was determined to cast a ballot.

But when in March he travelled to the Venezuelan consulate in New York, he was asked to submit a utilities bill proving that he resides in the United States. He eventually produced one but was then told internal systems were down.

It was only on his third attempt this month that consular officials told him he was successfully registered - but he has yet to receive a formal notification of a change of residency.

"They put down thousands of hurdles so that you can't change your residency," said Sulbaran, who is still unsure whether he will be able to vote for Falcon on Sunday. The Venezuelan consulate in New York responded that "requirements have always been the same. And all those who are registered must exercise the right to vote."

One former engineer at Venezuelan state oil company PDVSA, who asked not to be identified to avoid repercussions for his family back home, said he missed the deadline to change his voting centre after he emigrated to Colombia last month.

But the former mid-level manager - who now works at a used cars and motorbikes store - said he had no interest in voting.

During past elections in Venezuela, he received text messages and calls from PDVSA pressuring him to vote for the government, a common experience for state employees.

"The government has taken control of all institutions and controls the electoral council so I don't think it makes any difference whether we vote or not," said the former manager, who now earns 28 times what he did back home in dollar terms.

"I'm carving out a new path for myself, starting again from the bottom to climb up slowly, and I want to leave Venezuela in the past."