LEZINNES, France (Reuters) - In a factory in rural France, a laser cuts through a hemp canvas on the production line of what the manufacturer says is Europe's first compostable face mask. 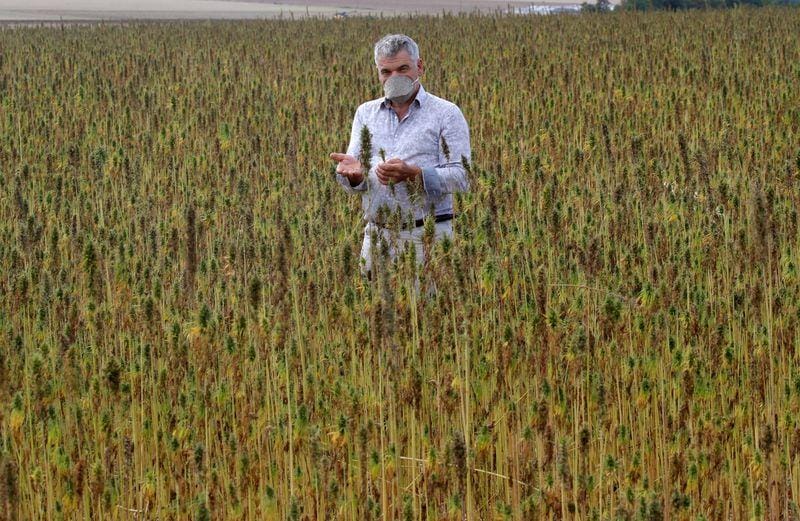 LEZINNES, France (Reuters) - In a factory in rural France, a laser cuts through a hemp canvas on the production line of what the manufacturer says is Europe's first compostable face mask.

Geochanvre pitches the hemp masks as a way to reduce plastic waste during the coronavirus pandemic from single-use protective gear that environmentalists say will take centuries to decompose and is polluting the oceans.

"It's heresy not to ban polyethylene products, materials that are shipped to all corners of the world. Use local agricultural materials," Frédéric Roure, founding president of Geochanvre, told Reuters TV.

"This is a natural product and will go back into the soil."

The mask's lining includes a corn blend for comfort and the elastic band is recyclable.

Bales of hemp fibre are passed through compressors and over rollers before emerging at the end of the line as hard-packed flat sheets, ready to be cut into shape and folded by hand.

Customers, mostly from Europe and Canada, have so far bought 1.5 million of the hemp masks since March.

Worldwide, an estimated 129 billion disposable face masks and 65 billion gloves are used every month, according to a study in the journal Environmental Science and Technology.

Most single-use protective gear is made from plastics including polypropylene, polythene and vinyl.

Disposable plastic masks that end up in the oceans could take up to 450 years to decompose, according to campaign group Waste Free Oceans.

Biodegradable and compostable face masks, made from materials such as hemp or wood fibres, are being made or developed around the world.