By Gabriela Baczynska and Sudip Kar-Gupta SOFIA/PARIS (Reuters) - French energy giant Total joined other European companies in signalling on Wednesday they could exit Iran, casting doubt on whether European leaders meeting to try to salvage the Iran nuclear deal can safeguard trade with Tehran. 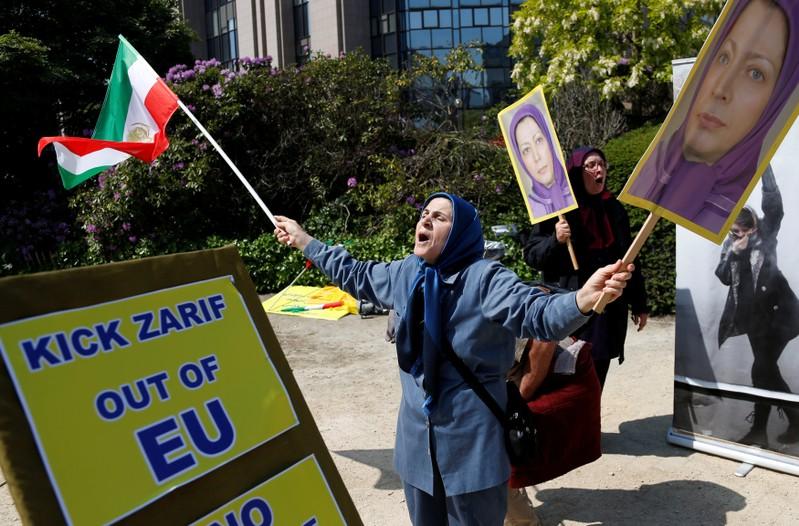 By Gabriela Baczynska and Sudip Kar-Gupta

SOFIA/PARIS (Reuters) - French energy giant Total joined other European companies in signalling on Wednesday they could exit Iran, casting doubt on whether European leaders meeting to try to salvage the Iran nuclear deal can safeguard trade with Tehran.

President Donald Trump's withdrawal of the United States from the nuclear accord and his order that sanctions be reimposed on Tehran have left European allies scrambling to keep the deal alive and protect their Iranian trade.

EU leaders gathered in the Bulgarian capital of Sofia on Wednesday for their first meeting on the matter since Trump quit the accord. But U.S. clout in international trade and finance limits their scope for action.

Such a move would be a blow to President Hassan Rouhani, who had hoped the prestigious project could make other international businesses regain confidence in Iran and open the floodgates for foreign investment.

Trump's decision to abandon the 2015 nuclear accord risks exposing European countries that have since invested in Iran to renewed U.S. sanctions, after "wind-down" periods of three to six months expire.

Danish oil product shipping operator Maersk Tankers said it would wind down its customer agreements in Iran by November, while German insurer Allianz

The 28 EU leaders meeting in Sofia were not expected to reach any quick conclusions on how to try to shield their economic cooperation with Iran.

European Commission head Jean-Claude Juncker was due to present options to protect European investment, which could include retaliatory sanctions, allowing the European Investment Bank to invest in Iran, and coordinating euro-denominated credit lines from European governments.

But the reach of the U.S. financial system, the dominance of the dollar and the presence of European companies' operations in the United States all weaken any potential EU measures.

Iran has said it may start enriching uranium again if it can no longer see any economic benefit from sticking to the deal, which lifted earlier international sanctions on the Islamic Republic in exchange for it curbing its nuclear ambitions.

British, French and German foreign ministers, along with the EU's top diplomat, vowed to try to keep Iran's oil and investment flowing after a meeting with their Iranian counterpart on Tuesday, but admitted they would struggle to provide the guarantees Tehran seeks.

They tasked experts with coming up with measures for a meeting of their deputies in Vienna next week.

The EU's top energy official, Commissioner Miguel Arias Canete, is meanwhile heading to Iran on May 18-21 for talks on energy cooperation, a symbolic gesture from the EU that it wants to stay engaged despite the U.S. withdrawal.

Total said it would wind down operations linked to the South Pars gas venture before Nov. 4 unless it were granted a specific project waiver by the U.S. authorities, with the support of the French and European authorities.

The French firm signed a deal with Tehran in July 2017 to develop phase 11 of Iran's South Pars field, marking the first major Western energy investment in the long isolated country since the lifting of sanctions.

Underlining the depth of trans-Atlantic discord, the chairman of EU leaders Donald Tusk said Trump had "rid Europe of all illusions" by withdrawing from the Iran accord and driving trade disputes.

"Looking at the latest decisions of President Trump, someone could even think: With friends like that, who needs enemies?" Tusk told a news conference.

Repudiating the result of more than a decade of diplomacy, Trump quit the accord last week, complaining that the deal does not cover Iran's ballistic missiles, its role in regional wars or what happens after the pact begins to expire in 2025.

Major European countries share Trump's concerns but argue that the nuclear deal is the best way to stop the increasingly influential regional power from obtaining an atomic weapon.

In Moscow, Deputy Foreign Minister Sergei Ryabkov said Russia supported an EU proposal to hold a meeting on the Iran deal in Vienna, Interfax news agency said. The meeting is due on May 25.

The United States imposed sanctions on Tuesday on Iran's central bank governor, three other individuals, and an Iraqi-based bank as Washington seeks to cut off funding it says Tehran is using to fund militant activities overseas.

Iran said the new U.S. sanctions were an attempt to derail efforts to save the nuclear deal.

President Hassan Rouhani said Trump had expected Iran to leave the deal after the U.S. withdrawal, but Tehran had refused to follow that plan by trying to save the deal with its remaining signatories.

"Trump played his first card, but miscalculated the second move," Rouhani was quoted as saying by the ISNA agency.