By Christian Shepherd BEIJING (Reuters) - The wives of four of China's most prominent rights lawyers and activists shaved their heads on Monday in protest over what they called the 'persecution' of their husbands by the government. 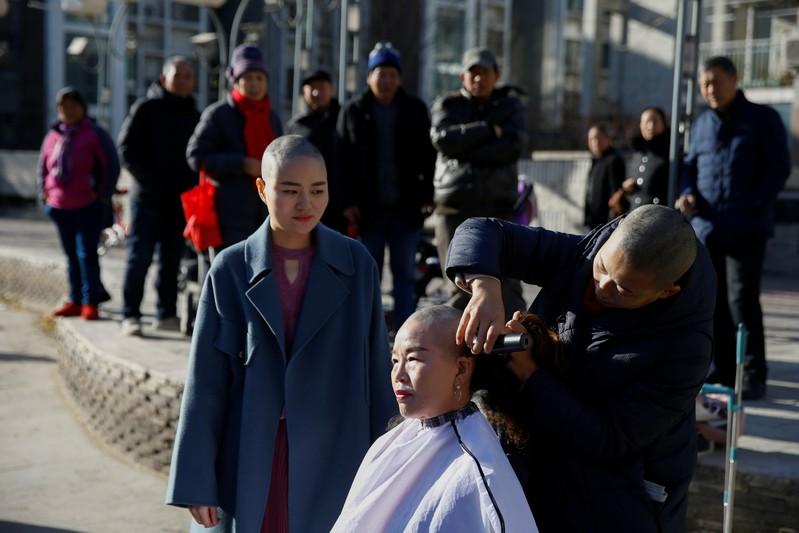 BEIJING (Reuters) - The wives of four of China's most prominent rights lawyers and activists shaved their heads on Monday in protest over what they called the "persecution" of their husbands by the government.

Since taking office in 2012, Chinese President Xi Jinping has overseen a crackdown on dissent, with hundreds of rights lawyers and activists being detained, arrested and jailed.

Four wives of lawyers detained during a July 2015 sweep known as the 709 crackdown gathered in the central park of a sleepy Beijing apartment complex and cut off their hair in front of neighbours and a small group of invited foreign journalists.

The women took turns shaving each other's heads, placing the hair in see-through plastic boxes alongside pictures of them with their husbands, before heading to China's Supreme People's Court to petition over their husbands' treatment.

Li Wenzu, who says she has been unable to visit her husband, rights lawyer Wang Quanzhang, since he went missing in the 2015 crackdown, told reporters that the act was to protest against the way her husband's case was being handled.

Li said judges in Wang's trial had unlawfully delayed proceedings and prevented her from appointing a lawyer of her choosing.

Wang is being held in Tianjin on suspicion of subverting state power, but both Li and seven lawyers she has appointed to try and represent Wang have been unable to visit him, she said.

"We can go hairless, but you cannot be lawless," they announced at the end of the ceremony, a pun in Chinese, as the words for "hair" and "law" sound similar.

Requests for comment faxed to China's Supreme People's Court and the Tianjin Number 2 Intermediate People's Court, where Wang's case is set to be heard at an unknown date, went unanswered.

Li, Wang and other family members of rights lawyers and activists who have been detained or jailed have in recent years taken up their loved ones' causes and attempting to keep pressuring the government into allowing their release.

The authorities have responded using "soft" detention measures, such as house arrest, to keep family members from getting their message out, rights activists have said.