Lima: At least 44 people were killed and 24 others injured when a bus skidded off the road and plunged into a river in Peru's Arequipa region, authorities said.

Seven of the injured are in serious condition, including three children, reports Efe news agency. The accident occurred on Wednesday on the Pan-American Highway. 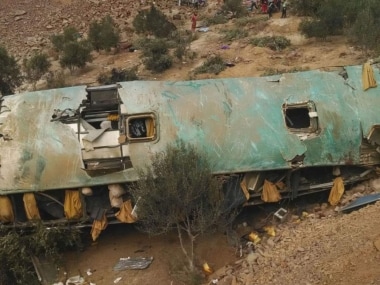 At least 25 people were killed when their bus veered off a highway and tumbled 200 meters down a cliff. AP

The authorities were still trying to determine what caused the bus to skid off the road and plunge 200 metres into the Ocona River.

The bus was travelling from Chala to Arequipa city, and was running on an expired operating permit, the transportation ministry said.

"My condolences to the families of the victims of the transit accident in Arequipa," President Pedro Pablo Kuczynski tweeted.