By Trevor Hunnicutt WILMINGTON, Del. (Reuters) - U.S. President-elect Joe Biden focused on building his incoming administration and offered a message of healing on Tuesday as his transition team began contacting federal agencies to prepare for a handover of power in January from President Donald Trump. 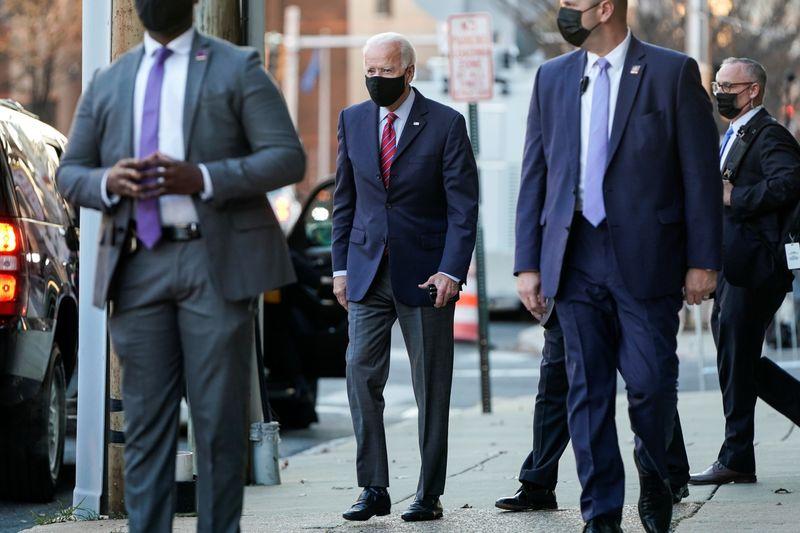 WILMINGTON, Del. (Reuters) - U.S. President-elect Joe Biden focused on building his incoming administration and offered a message of healing on Tuesday as his transition team began contacting federal agencies to prepare for a handover of power in January from President Donald Trump.

The Democratic former vice president has been moving swiftly to assemble his team and make Cabinet choices after defeating the Republican incumbent in the Nov. 3 election. Trump has waged a flailing legal battle to try to overturn the results, falsely claiming that the election was stolen from him.

"The election is over. It's time to put aside the partisanship and the rhetoric designed to demonize one another. We have to come together," Biden, due to office on Jan. 20, said on Twitter on Tuesday.

Trump has said he will never concede the election but after weeks of limbo his administration on Monday finally gave the green light for the formal transfer of power to begin. That process had been held up despite Biden emerging as the clear winner and world leaders recognizing him as the next president.

Monday's announcement meant the Biden team qualifies for $6.3 million in funds and among other things can officially coordinate with the 17 agencies that are part of U.S. intelligence gathering, according to the nonpartisan Partnership for Public Service.

The Biden team also gets access to federal office space, secure facilities for intelligence briefings and the succession plans for executive agencies. In addition, the State Department typically supports a transition team's discussions with foreign leaders.

One of the first departments that Biden's team reached out to was the Pentagon, underscoring the importance of emphasizing national security during the transition. Trump fired Defense Secretary Mark Esper on Nov. 9.

In a small but symbolic move hours after the transition announcement on Monday night, Biden opened a ".gov" website available only to government agencies for his transition, launching buildbackbetter.gov.

Critics have said Trump's refusal to accept the results and approve the transition of power to Biden undermined U.S. democracy and undercut the incoming administration's ability to combat the intensifying coronavirus pandemic that has killed about 258,000 Americans and left millions more without jobs.

The administration's decision to allow the transition to go forward followed meetings at the White House, including one with White House chief of staff Mark Meadows, White House counsel Pat Cipollone and Jay Sekulow, a personal lawyer for Trump, who called in by phone, according to a person familiar with the matter.

The source said it did not mean Trump was giving up on his legal battle to try to overturn the results in number of states or conceding, but that it was the appropriate thing for the process.

"He's not throwing in the towel," the source said.

Asked how long the legal challenge could go on, the source said it could not go past Dec. 14, when electors from the 50 states and the District of Columbia convene as an Electoral College to formally select the next president.

Trump's legal strategy has hinged on stopping certain states that he lost from certifying their election results, an effort that has met no success. Michigan on Monday certified its results showing Biden the winner, while Pennsylvania's governor said on Tuesday his state had done so as well. Trump won both states in his 2016 victory.

Trump and his lawyers have promised new lawsuits in their fading legal fight, which has dwindled to two appeals of rulings against the campaign and a case in Nevada by electors pledged to Trump seeking to nullify the state's election results.

Biden and Vice President-elect Kamala Harris are due to formally introduce their foreign policy and national security teams on Tuesday in Wilmington, Delaware. On Monday, the Biden team said it had tapped Antony Blinken to be U.S. secretary of state, Jake Sullivan as national security adviser, Linda Thomas-Greenfield as U.S. ambassador to the United Nations and Alejandro Mayorkas as secretary of homeland security.

Biden's foreign policy is likely to focus on repairing Washington's relationships with key U.S. allies in Europe and around the world and taking new paths on issues like climate change.

Attention is also building on Biden's possible pick to become treasury secretary, whose first task will be to steer the government's response to the economic fallout of the pandemic.

Yellen, who would be the first woman to hold the job, is a seasoned economist and labor market expert respected by Congress and Wall Street. Her appointment would shift the department away from the tax cuts and easing of financial regulations that were the paramount focus under the Trump administration.