By Giulia Paravicini and David Lewis ADDIS ABABA/NAIROBI (Reuters) - Some African and European nations pressed Ethiopia behind the scenes on Monday to allow mediation of a war in a northern region that has spilled into neighbouring Eritrea and rocked the wider Horn of Africa, diplomats said. Hundreds have died, 25,000 refugees have fled to Sudan and there have been reports of atrocities since Prime Minister Abiy Ahmed ordered air strikes and a ground offensive on Nov 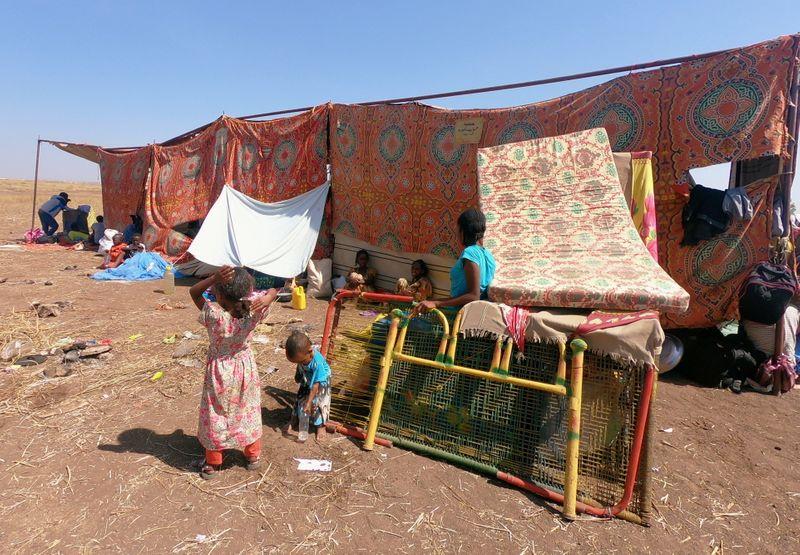 By Giulia Paravicini and David Lewis

ADDIS ABABA/NAIROBI (Reuters) - Some African and European nations pressed Ethiopia behind the scenes on Monday to allow mediation of a war in a northern region that has spilled into neighbouring Eritrea and rocked the wider Horn of Africa, diplomats said.

Hundreds have died, 25,000 refugees have fled to Sudan and there have been reports of atrocities since Prime Minister Abiy Ahmed ordered air strikes and a ground offensive on Nov. 4 against Tigray's rulers for defying his authority.

But Africa's youngest leader, who won a Nobel Peace Prize last year, has so far resisted pressure for talks.

"We are saying 'Give us time'. It's not going to take until eternity ... it will be short-lived operation," Redwan Hussein, spokesman for the government's Tigray crisis task force, told reporters.

"We have never asked Uganda or any other country to mediate," Redwan added, after Uganda's President Yoweri Museveni met Ethiopia's foreign minister and appealed for negotiations.

The Tigray flare-up could jeopardise the recent opening up of Ethiopia's economy, stir ethnic bloodshed elsewhere around Africa's second most populous nation, and tarnish the reputation of Abiy, 44, who won his Nobel for peace with Eritrea.

The Tigray People's Liberation Front (TPLF), which governs the region of 5 million people, has accused Eritrea of sending tanks and soldiers over the border against it.

Tigray forces fired rockets into Eritrea at the weekend.

Ethiopia's task force said federal troops had "liberated" the town of Alamata from the TPLF in south Tigray after saying last week they had seized the west.

With communications mainly down and media barred, Reuters could not independently verify assertions made by all sides.

There was no immediate comment from Tigray's leaders about Alamata, near the border with Amhara state, about 120 km (75 miles) from Tigray's capital Mekelle.

TPLF leader Debretsion Gebremichael urged the United Nations and African Union to condemn Ethiopia's federal troops, accusing them of using high-tech weaponry including drones in attacks he said destroyed a dam and a sugar factory.

"Abiy Ahmed is waging this war on the people of Tigray and is responsible for the purposeful infliction of human suffering," he said, warning that Ethiopia could become a failed state or disintegrate.

The government has denied targeting the dam or civilian locations, but has not commented on the sugar factory.

Tigray leaders accuse Abiy, from the largest Oromo ethnic group, of persecuting them and purging them from government and security forces over the last two years. He says they rose up against him by attacking a military base.

Amnesty International has denounced the killing of scores and possibly hundreds of civilian labourers in a massacre that both sides have blamed on each other.

"A war in Ethiopia would give the entire continent a bad image. There should be negotiations and the conflict stopped, lest it leads to unnecessary loss of lives and cripples the economy," he said in a tweet later deleted.

Demeke went on to Kenya afterwards.

"Everybody is encouraging talks, it's very urgent," said Mahboub Maalim, a Kenyan diplomat who heads the Nairobi-based regional think-tank Sahan. "Its not the time to apportion blame now. We should focus on a ceasefire."

Kenya and Djibouti urged a peaceful resolution and the opening of humanitarian corridors, while Nigeria's former president Olusegun Obasanjo went to Ethiopia.

European nations were also weighing in too, diplomats said, with Norway planning to send a special envoy.

"The door is closed but we have to keep being vocal. Just because he (Abiy) doesn't want it (mediation), we are not going to keep quiet," one diplomat told Reuters.

Another diplomat said Ethiopia's army was reporting it had retaken 60% of Tigray and was planning a multi-pronged offensive on the regional capital Mekelle, aiming to reach it in three days.

The Ethiopian National Defence Force has around 140,000 personnel and plenty of experience from fighting Somali militants, rebels in border regions, and Eritrea.

But many senior officers were Tigrayan, much of its most powerful weaponry is there and the TPLF has seized the powerful Northern Command's headquarters in Mekelle.

The TPLF itself has a formidable history, spearheading the rebel march to Addis Ababa that ousted a Marxist dictatorship in 1991 and bearing the brunt of the 1998-2000 war with Eritrea that killed hundreds of thousands.

Eritrea's President Isaias Afwerki – a long-time foe of the Tigrayan leaders - controls an army which the United States' CIA puts at 200,000 personnel.