By Tom Perry and Ellen Francis BEIRUT (Reuters) - Kurdish politician Hevrin Khalaf spent the final months of her life building a political party that she hoped would help shape Syria's future, drawing the attention of U.S. officials who said it would have a say in what happened once the war ended. To her colleagues in the Future Syria Party and Kurdish communities in Syria's northeast more broadly, her killing became a symbol of betrayal by the United States. 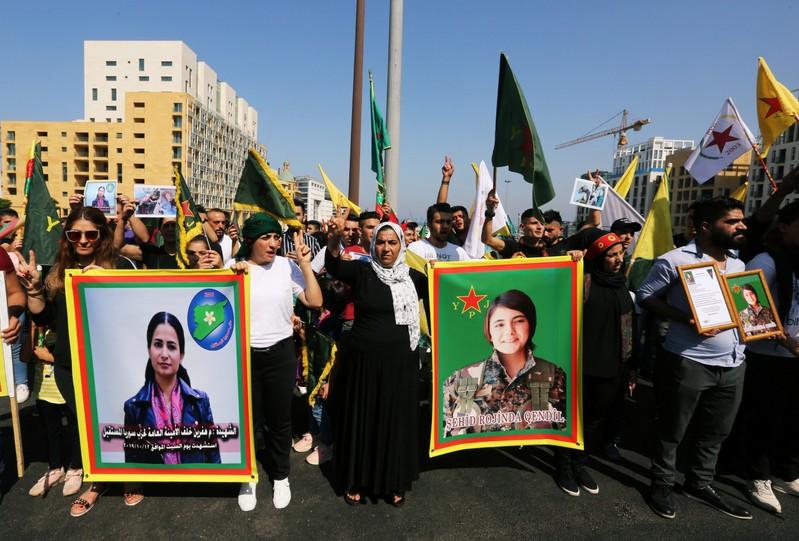 By Tom Perry and Ellen Francis

BEIRUT (Reuters) - Kurdish politician Hevrin Khalaf spent the final months of her life building a political party that she hoped would help shape Syria's future, drawing the attention of U.S. officials who said it would have a say in what happened once the war ended.

To her colleagues in the Future Syria Party and Kurdish communities in Syria's northeast more broadly, her killing became a symbol of betrayal by the United States.

As recently as Oct. 3, State Department officials reassured her at a meeting that Washington would safeguard northern Syria from a threatened Turkish assault by mediating between Kurdish-led forces and Ankara, according to a colleague who was present.

A state department official said the U.S. message to Syrian partners had been consistent: that American forces would be withdrawing from the country.

Days after the meeting, President Donald Trump announced U.S. forces would quit the region, leaving it vulnerable to attack by Turkey.

Kurdish fighters in northeast Syria, key allies in the U.S. battle against Islamic State, said rebels fighting on the Turkish side murdered Khalaf. She was 34.

She was slain on Oct. 12 along with a driver and aide when Turkey-backed fighters stopped their SUV on the M4 highway in northern Syria, according to the Kurdish-led Syrian Democratic Forces (SDF) and officials in her party.

The spokesman for the Turkey-backed Syrian rebel force, the National Army, at the time denied its fighters killed her, saying they had not advanced as far as the M4.

Last week, the spokesman, Youssef Hammoud, said the incident was being investigated among other "breaches".

"If America hadn't decided to withdraw, these factions ... would not have dared to carry out their operations in that area," said Moaz Abdul Karim, a Future Syria Party leader.

The U.S. State Department has said it was looking into reports of Khalaf's death apparently while in the hands of Turkey-backed forces, calling the reports "extremely troubling".

An autopsy report circulated by the SDF said Khalaf's body had been riddled with bullets.

On Oct. 3, U.S. State Department representatives visited the Future Syria Party's headquarters in the Syrian city of Raqqa and told Khalaf and party president Ibrahim al-Kaftan that American efforts in the region were aimed at mediation.

Since the party was founded in 2018, its leaders say U.S. officials have voiced their support. The party aims to attract members from across the ethnic spectrum in a region where critics said the Kurdish YPG militia had become too powerful.

"Yes, there was encouragement from the Americans to set up a party," Kaftan said.

"The party was already being worked on by a team who believes in Syrian democracy. It was a Syrian idea, not an American one, but I repeat they were in favour of this idea," he told Reuters in written answers to questions.

U.S. forces withdrew from a section of the border on Oct. 7, and soon afterwards Turkish troops mounted their third incursion into northern Syria since 2016.

Ankara views the YPG as a terrorist threat due to their links to a Kurdish insurgency at home. It has also said its operation in Syria was designed to create a buffer where some of the 3.6 million refugees who fled the Syrian conflict into Turkey could be re-settled.

A civil engineer by training, Khalaf was deeply involved in the politics of northeast Syria from the earliest days of the war, now in its eighth year.

After leaving her job as a state employee, she helped to set up the Kurdish-led administration whose influence would eventually stretch over one third of Syria including predominantly Arab areas.

In 2018, she was elected secretary general of the Future Syria Party, which was launched from Raqqa, a predominantly Arab city where the SDF defeated IS in 2017 with U.S. backing.

Kaftan, an Arab architect from Manbij, was elected its leader, and he said that U.S. and French officials attended the ceremony.

The United States has long adopted a cautious political approach towards northern Syria, even as it backed the SDF militarily in the fight against IS.

Washington opposed the emergence of the Kurdish-led autonomous region and the main Kurdish groups were always kept out of the U.N. political process for Syria, despite their huge influence on the ground.

But according to Kaftan, U.S. officials including the envoy for Syria James Jeffrey told members of his party that it would have a role in international talks over Syria's future.

The State Department official said the United States wanted a political solution to Syria's conflict that included "full representation for all Syrians.

"U.S. officials, including Ambassador Jeffrey, made clear that this included the populations of northeast Syria and intervened repeatedly with the UN to this end."

The fate of Kurds in northern Syria is now more uncertain than it has been for years. Stripped of U.S. protection, the SDF struck a deal for Syrian government forces to deploy into the region it controlled.

The SDF says Washington has stabbed it in the back.

Despite the Turkish incursion, which has sparked an exodus and killed scores of people, leaders of Future Syria Party hope it will have a role in shaping the next phase of Syria's recovery from war.

Khalaf always believed the solution in Syria must come through dialogue with all concerned parties including the Syrian government and Turkey, Kaftan said.

"Hevrin didn't sleep more than 4-5 hours a day," he said. "But she would always say Syria deserves a lot from us, and for the people who have suffered through nine years of war, we must seek to secure a real, safe future for them."