By Ernest Scheyder and Patrick Rucker WILMINGTON/FAYETTEVILLE, N.C. (Reuters) - Deeper flooding loomed in the hours and days ahead from rivers in the Carolinas swollen by Tropical Depression Florence, which has killed 23 people, even if rain-weary residents got a brief glimpse of sunshine on Monday. 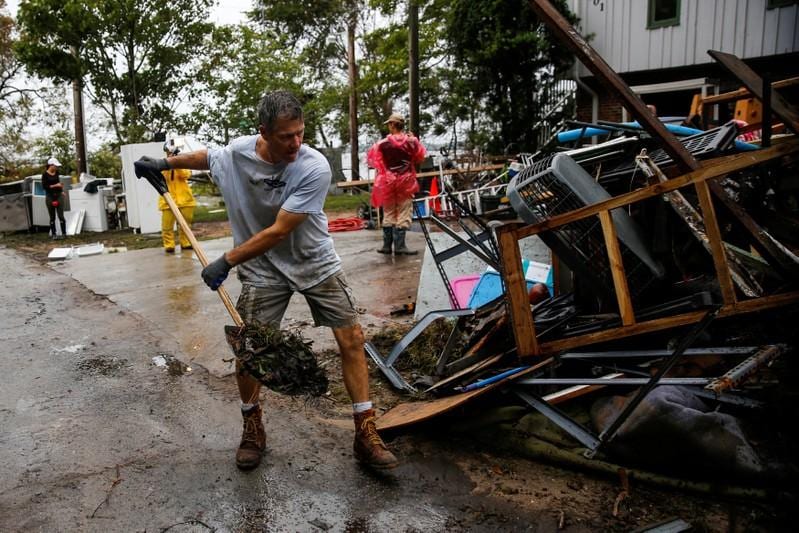 WILMINGTON/FAYETTEVILLE, N.C. (Reuters) - Deeper flooding loomed in the hours and days ahead from rivers in the Carolinas swollen by Tropical Depression Florence, which has killed 23 people, even if rain-weary residents got a brief glimpse of sunshine on Monday.

The slow-moving storm, a hurricane when it hit the North Carolina coast, has dumped up to 36 inches (91 cm) of rain on the state since Thursday, displacing thousands. The flooding could persist for several weeks in some areas.

Residents of the Carolinas were starting to confront the storm's after-effects, including power outages, impassable roads, and sewage spilling into flooded areas, while the hurricane's remnants headed north.

"For many parts of North Carolina, the danger is still immediate," North Carolina Governor Roy Cooper said at a news conference Monday. "Flood waters are rising as rivers crest and they will for days."

The coastal city of Wilmington was largely cut off due to flood waters from the Cape Fear River, with one single road available for emergency workers and those bringing food and water. Officials were discouraging people from returning, however. Further inland, the same river, running through Fayetteville, a city of 200,000, was expected to reach major flood levels later on Monday, and would not crest until Tuesday.

The dead included a 1-year-old boy swept away from his mother as they tried to escape their car amid floodwaters. The woman had driven around barricades to reach a closed road, the sheriff's office in Union County, near North Carolina's border with South Carolina, said on Facebook.

"Don't drive around barricades. We're seeing this happen now and the result is not good," Cooper said.

North Carolina officials reported 1,200 road closures, including a stretch of Interstate 95, a major transportation artery on the U.S. East Coast.

About 509,000 homes and businesses were without electricity in North and South Carolina and surrounding states.

Rex Gehring, 62, was unsure what he would do with the house he bought outside Fayetteville after Hurricane Matthew in 2016 forced its previous owner into foreclosure.

"We’re in a floodplain but a hundred-year one,” he said as floodwaters lapped at the house's front steps. "I guess that means every two years now."

Cooper said 2,600 people were rescued in North Carolina, along with 300 animals, and that the rescues were continuing. About 14,000 people are in shelters, officials said.

The sun appeared in some areas for the first time in days, allowing some people to return home to assess damage and to reckon with the problems that develop as a result of massive floods caused by several feet of rain.

A power outage at a wastewater treatment plant in Wilmington resulted in partially treated sewage water being released into the Cape Fear River, said Reggie Cheatham, director of the U.S. Environment Protection Agency's Office of Emergency Management. Sewage releases in the Neuse River also were reported, as well as overflowing manholes.