Islamabad: Prime Minister Nawaz Sharif on Tuesday said that Pakistan was fighting terrorism as part of a "moral obligation" to eliminate the scourge from the country, a day after a Taliban suicide bomber killed 17 people in the restive northwestern region. 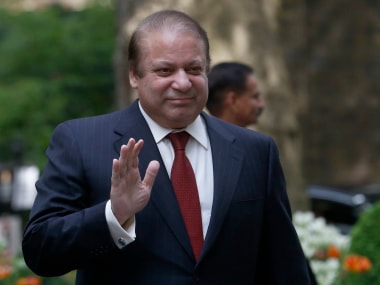 Sharif stated this in a meeting with visiting British Secretary of State Philip Hammond who called on him.

According to a statement, Sharif said that "fighting the war against terrorism is the moral obligation of Pakistan" and that his government is leading the war on terror to "ensure a peaceful tomorrow for the country and our future generations".

"We strongly condemn terrorist activities anywhere in the world whether perpetrated by individuals, groups or states," he said.

He said the ongoing military offensive against all terrorist groups - Operation 'Zarb-e-Azb' has broken the back of terrorists.

The prime minister said his government faced major challenges of terrorism, economic degradation and energy deficiency after he assumed office.

"We are overwhelmingly contented that our government has delivered on all these fronts. We evolved broad based consensus on National Action Plan, which has yielded very positive results in eliminating the scourge of terrorism from our land," he said.

Hammond praised the Pakistan government for its domestic reform agenda and legislation and national policies to protect women and minorities.

"You are doing the right thing by reaching out to your neighbours. Your message of peace is in fact reaching the entire world, which is reassuring," he said.

Sharif said that Pakistan has a vital stake in peace, stability and development in Afghanistan and supports efforts for promoting peace and reconciliation through Afghan-owned and Afghan-led peace process.