By Francesco Guarascio BRUSSELS (Reuters) - The European Union executive urged member states on Wednesday to launch earlier and broader vaccination campaigns against flu this year to reduce the risk of simultaneous influenza and COVID-19 outbreaks in the autumn. The European Commission wants to head off the risk of hospitals being again overwhelmed by a surge of patients, as happened at the peak of the COVID-19 pandemic in Europe in March and April. 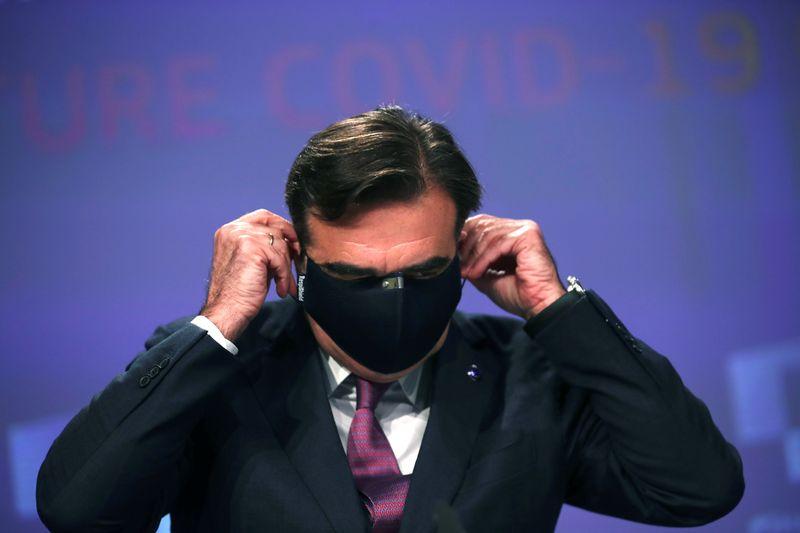 BRUSSELS (Reuters) - The European Union executive urged member states on Wednesday to launch earlier and broader vaccination campaigns against flu this year to reduce the risk of simultaneous influenza and COVID-19 outbreaks in the autumn.

The European Commission wants to head off the risk of hospitals being again overwhelmed by a surge of patients, as happened at the peak of the COVID-19 pandemic in Europe in March and April.

"Simultaneous outbreaks of seasonal influenza and COVID-19 would place a considerable strain on health systems," the Commission said in a document that lists actions needed to gird for a possible large second wave of COVID-19 in the autumn.

To avoid what the Commission's vice president, Margaritis Schinas, called "a cocktail of risks," it said EU governments this year should buy more shots against influenza and increase the number of people who are vaccinated.

They should also, the Commission said, begin vaccinating people this month, instead of waiting until October, when flu vaccination drives traditionally begin in Europe.

Health Commissioner Stella Kyriakides said governments should fight "vaccine hesitancy" to achieve these results, referring to people's growing scepticism about vaccinations which led to the resurgence of certain diseases, such as measles, before the COVID-19 pandemic.

The recommendations are not binding on EU governments, which throughout the crisis have often applied different measures to tackle the pandemic.

"Coordination has been a big challenge," Kyriakides told a news conference, noting however that the 27 EU states had stepped up joint actions as the crisis unfolded.

To increase their readiness ahead of possible new large outbreaks, the Commission also called on states to test more people for coronavirus infections and set up efficient contact tracing systems.

Brussels wants governments to use contact tracing apps which are operable across EU borders. But at this stage only ten of the 27 EU states have launched such applications.