Factbox: The Myanmar military conglomerates sanctioned by U.S. and Britain

(Reuters) - The United States and Britain sanctioned conglomerates controlled by Myanmar's military on Thursday following its Feb. 1 coup and deadly crackdown on demonstrators 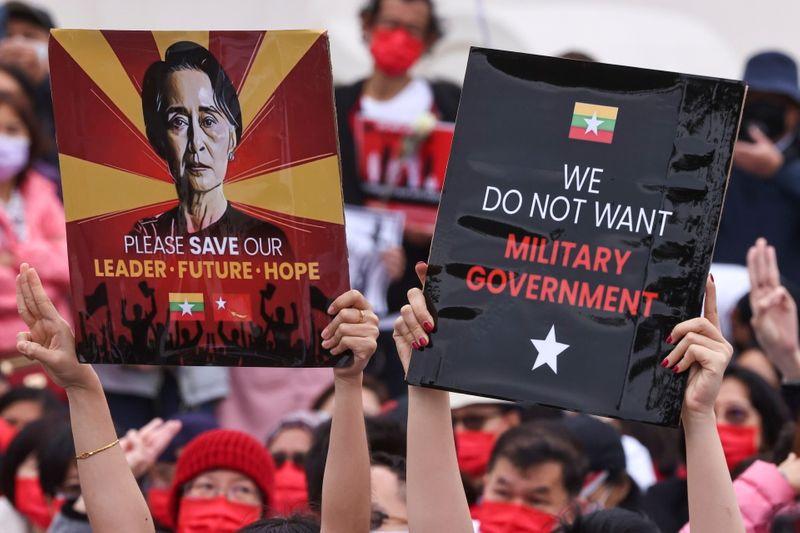 (Reuters) - The United States and Britain sanctioned conglomerates controlled by Myanmar's military on Thursday following its Feb. 1 coup and deadly crackdown on demonstrators.

Here is what we know about the blacklisted firms Myanmar Economic Holdings Ltd (MEHL) and Myanmar Economic Corporation (MEC), based on a 2019 report produced by the United Nations Human Rights Council.

After Reuters broke news of the U.S. sanctions earlier on Thursday, MEHL general manager Hla Myo said in an email: "The company is basically focusing on business and has no immediate response for now."

MEC did not immediately respond to a request for comment.

- MEC and MEHL are two major holding companies that own more than 100 businesses, generating revenue for the military on a scale that dwarfs any civilian-owned company in Myanmar.

- Financial information about the two companies, which are exempt from paying income and commercial tax, is not disclosed. The funds they generate bypass formal government channels, with indications that billions of dollars of revenue from oil and gas, copper and gemstone operations remain unaccounted for.

- MEHL was the first private company established in Myanmar following a 1988 coup that installed a new military regime after two decades of army-led socialism. MEHL has businesses that span jade and ruby mining, banking, food and drink sales, tourism and transport.

- MEC was established in 1997 and is equally diverse but with a greater focus on raw material production, including coal and gas, and manufacturing. Its main purpose is to supply the military with natural resources and factory goods.

- The companies own two of Myanmar's largest private banks, giving the military access to the international financial system. Myawaddy Bank, established in 1993, is owned by MEHL. MEC owns Innwa Bank, which opened in 1997.

- Current and former high-ranking officials in the Tatmadaw, as the military is known locally, including Commander-in-Chief Min Aung Hlaing, have significant control and influence over the two holding companies and their subsidiaries.

- MEHL and MEC own sizeable amounts of land throughout Myanmar, including premises rented by foreign companies. They also have joint ventures with foreign firms.

- Japanese drinks maker Kirin last month announced it was cutting ties with MEHL, although it plans to keep selling beer in the country.

- An affiliate of South Korean steelmaker POSCO runs a plant in Myanmar with MEHL. A spokesman for the affiliate, POSCO C&C, said on Thursday the firm did not expect the U.S. sanctions to impact its business in Myanmar.

- A unit of Indian firm Adani is developing a port in Yangon through a lease deal with MEC, according to the 2019 U.N report. An Adani spokesman declined to comment on the lease deal on Thursday. He said the firm was watching the situation and will engage with authorities and stakeholders on the way forward.