LONDON (Reuters) - Johnny Depp is suing the publisher of Britain's Sun newspaper and its executive editor Dan Wootton for libel over an article that described the movie star as a 'wife beater'. The Sun's lawyers told the court they would show the allegation in the article was true and that Depp had beaten ex-wife Amber Heard during violent rages brought on by alcohol or drugs. Closing arguments are expected on Monday. 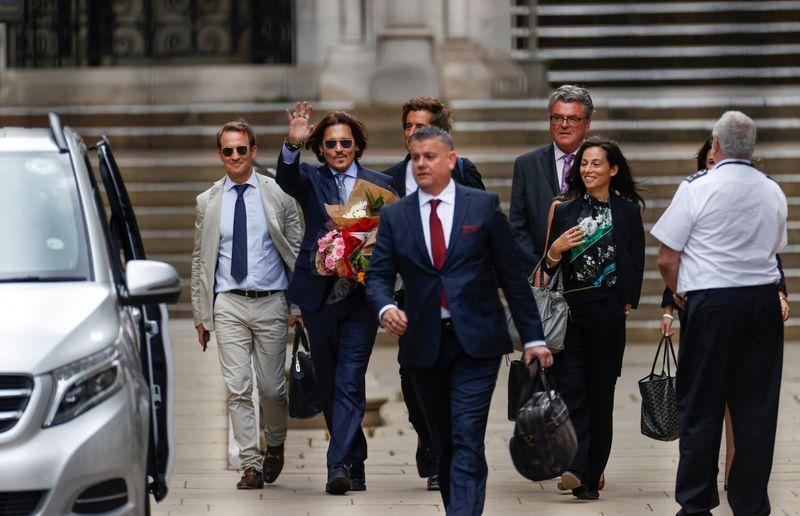 LONDON (Reuters) - Johnny Depp is suing the publisher of Britain's Sun newspaper and its executive editor Dan Wootton for libel over an article that described the movie star as a "wife beater".

The Sun's lawyers told the court they would show the allegation in the article was true and that Depp had beaten ex-wife Amber Heard during violent rages brought on by alcohol or drugs.

Closing arguments are expected on Monday. A verdict is expected to be announced later.

Here is some of the testimony given at London's High Court by Depp, 57, and Heard, 34.

* Depp rejected all allegations that he attacked his ex-wife and said Heard assaulted him. "For the avoidance of any doubt, I have never abused Ms Heard, or, indeed, any other woman, in my life," Depp said in a written witness statement.

* Depp denied first assaulting Heard at her home in March 2013 after she mocked one of his tattoos.

* Depp also denied attacking Heard while filming in Australia in March 2015. He said she had thrown a vodka bottle at him during an argument, severing the tip of his finger. He said he then suffered "some species of a nervous breakdown" and began to write messages on the wall in blood.

* Depp denied assaulting Heard after she became upset that he was late for her 30th birthday party in April 2016, saying he was delayed by a meeting with his business managers where he learned he had lost $650 million. He accused her of attacking him while he was reading in bed.

* The day after, a cleaner found faeces in the couple's bed. "I was convinced it was Miss Heard herself or one of her cohort," Depp told the court. "I thought it was a strangely, oddly fitting end to the relationship."

* Depp said Heard's accusations were part of a hoax. "She was building a wonderful dossier, an insurance policy for when we did break up."

* Depp said he had taken "every drug known to man" by the age of 14 and had struggled to come to terms with his fame after a difficult childhood. He used drugs to self-medicate rather than for recreational purposes and spent $30,000 a month on wine, he said.

* Depp said he modelled himself as a "Southern Gentleman" who would never strike a woman. He added what Heard referred to as "the monster" was him yelling back at her in arguments. "It would become a screaming match and that was the monster."

* Heard said Depp attacked her on at least 14 occasions, threatened many times to kill her, and that he slapped, punched, head-butted, throttled and kicked her when he became "the monster" - a violent and jealous alter ego fuelled by excessive drinking or drug-taking. "Johnny - the monster - nearly killed me. I loved the Johnny who was clean and sober," she said.

* She said while in Australia Depp took drugs, drank large volumes of alcohol and became violent and abusive. He grabbed her by the neck, smashed her head against a refrigerator, choked her and threw glass bottles at her. "He was pressing so hard on my neck I couldn't breathe." "I remember thinking he was going to kill me in that moment."

* Heard denied throwing a bottle at Depp and severing part of his finger. He had flung bottles at her "like grenades" she said. "I only threw things to escape Johnny when he was beating me up."

* Heard said she punched Depp in Los Angeles in 2015 because she feared he would push her sister downstairs.

* She said Depp belittled her work and accused her of having affairs with actors with whom she had auditioned or co-starred.

* Heard denied she or one of her friends had defecated in the bed and said one of their dogs may have done it.

* A series of texts Heard sent to her mother in 2013 were read out in court by a lawyer: "He's nuts mom. Violent and crazy. I am heartbroken that THIS is who I love," Heard said in one of them.