Factbox: How the political crisis in Belarus could unfold

MINSK (Reuters) - Alexander Lukashenko, the leader of Belarus, said on Monday he would be willing to hand over power after a referendum, an apparent bid to pacify mass protests and strikes that pose the biggest challenge to his 26 years in office. 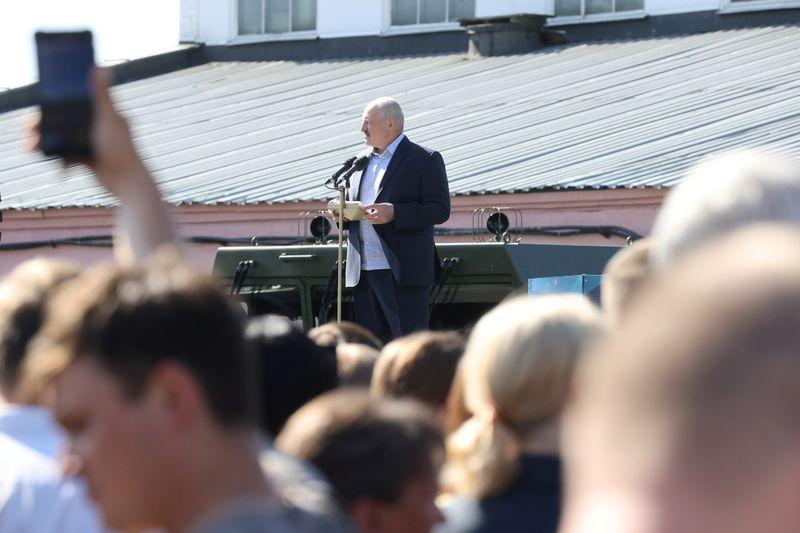 MINSK (Reuters) - Alexander Lukashenko, the leader of Belarus, said on Monday he would be willing to hand over power after a referendum, an apparent bid to pacify mass protests and strikes that pose the biggest challenge to his 26 years in office.

The situation in Belarus, a strategically important country that carries Russian energy exports to the West, is fluid after the biggest demonstration yet against his rule on Sunday.

The political crisis erupted after a presidential election on Aug. 9 which protesters say he massively rigged to ensure a phoney landslide win. Sviatlana Tsikhanouskaya, the opposition candidate was the real winner, they say.

Here are ways the situation could develop.

Lukashenko continues to ignore protesters' demands to step down and hold a new presidential election.

Protests against him continue, swell, and important parts of the police and security state apparatus defect to the opposition.

Crowds storm key government buildings, forcing him from power. He is either put on trial or flees the country.

Lukashenko reluctantly caves into protesters' demands for a re-run of what they say was a rigged presidential election last Sunday.

Lukashenko has said he would be willing to hand over power after a referendum, in an apparent bid to pacify the protesters. But he insisted this would not happen while he was under pressure from the streets. Such a scenario would see him manage his transition from power over a longer period.

President Vladimir Putin decides to restore order in a neighbouring country he regards as part of Moscow's orbit and a buffer zone against NATO.

Russia earlier told Lukashenko it was ready to assist Belarus in accordance with a military pact in the event of an external threat.

Intervention could range from anything from riot police reinforcement to special forces and the army.

Russian intervention would alienate a large part of the Belarusian population, but allow Lukashenko or a Moscow-friendly successor to rule a bit longer.

A WEAKENED LUKASHENKO CLINGS ON

Increasingly isolated and despised by his own people - at one point he said there would be no new presidential election until he was killed - Lukashenko relies on the army, the security service and the police to keep him in power after declaring martial law.