BERLIN (Reuters) - Germany's conservative Christian Democratic Union (CDU) elects a new leader on Saturday who would be in the pole position to succeed Angela Merkel as chancellor after she steps down following federal elections in September. The new CDU leader will be elected by 1,001 delegates at a digital congress. 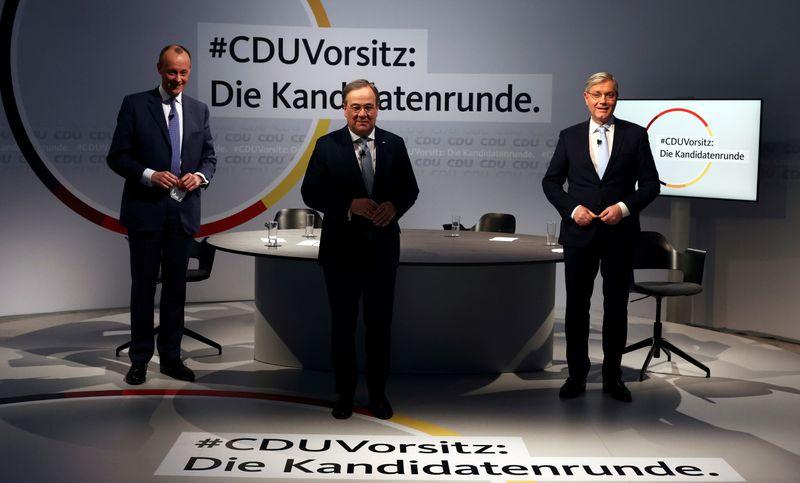 BERLIN (Reuters) - Germany's conservative Christian Democratic Union (CDU) elects a new leader on Saturday who would be in the pole position to succeed Angela Merkel as chancellor after she steps down following federal elections in September.

The new CDU leader will be elected by 1,001 delegates at a digital congress. By tradition, the leader is usually - though not always - chancellor candidate for the CDU's "Union" with its Bavarian sister party, the Christian Social Union (CSU).

The premier of the western state of North Rhine-Westphalia (NRW), Germany's most populous region, presents himself as the Merkel continuity candidate. Laschet, 59, has the advantage of controlling the CDU in NRW, which provides 298 of the 1,001 congress delegates, but lacks appeal with the wider electorate. He has polished his international profile, courted French President Emmanuel Macron, and complained last year that Berlin had taken "too long to react" to French calls for European Union reform. CDU sources say Laschet, a centrist, would be well suited to negotiating a possible coalition government with the Greens. However, he resisted early efforts to curb coal production. Merkel said last year he has "the tools" to run for chancellor, the closest she has come to endorsing anyone.

A rock-ribbed conservative who narrowly lost a 2018 bid for the CDU leadership, Merz was pushed out of his role as CDU parliamentary leader by Merkel in 2002 and has been out of the Bundestag since 2009. But he retained an influential network of CDU contacts while pursuing a successful business career and is a favourite with many rank-and-file party members. The plain-speaking Merz, 65, wants to shift the CDU to the right. He told Reuters last year that the EU must be careful not to become a "transfer union" in which richer member states are asked to bankroll their poorer peers. He has criticised the European Central Bank's policies on the euro common currency.

After starting the leadership race as an outsider, Roettgen, 55, has picked up support by presenting himself as a moderniser, appealing to women and younger voters. He has shown a capacity to reinvent himself, and some CDU lawmakers would like to see him do the same with the party. He beat Laschet in a 2010 contest to be party chief in NRW only to lose a subsequent state election, after which Merkel fired him as environment minister. He subsequently became chairman of the Bundestag's foreign affairs committee. Eloquent and intellectual, he wants Germany to take a firmer stance with Russia and China.

The Bavarian premier, 54, projects a charm that none of the CDU leadership candidates can match and is voters' preferred conservative leader. A political chameleon, he has shifted from the right towards the moderate centre of late and has courted the Greens, the Union's likely next coalition partner after many years with the sliding Social Democrats. Soeder plays coy about his ambitions - "My place is in Bavaria" has been his repeated refrain - but insists the CDU and CSU will decide together who should be their chancellor candidate. He has warned against departing from Merkel's centrist brand of politics. No German chancellor has ever come from the CSU.

By far the youngest of potential chancellor candidates, Spahn, 40, backed Laschet for the CDU leadership last February but his own profile and standing has since been boosted by his capable management of the coronavirus crisis. An economic liberal and openly gay Catholic, he was critical of Merkel's open-door policy during Europe's 2015 migrant crisis. Some CDU lawmakers, unimpressed with the three declared party leadership contenders, would like him to run for chancellor. While standing by Laschet in the CDU leadership contest, he has been more circumspect when asked about running for chancellor: "As of today, I rule that out," he said on Wednesday.