By Guy Faulconbridge LONDON (Reuters) - Dominic Cummings, British Prime Minister Boris Johnson's most powerful adviser, will leave his post at the heart of Downing Street when Brexit is done at year-end, after an internal battle over who should be Johnson's chief of staff. Cast, variously, as an anarchist, visionary, Britain's Rasputin or a political vandal, who is Cummings? Below are some of his sides 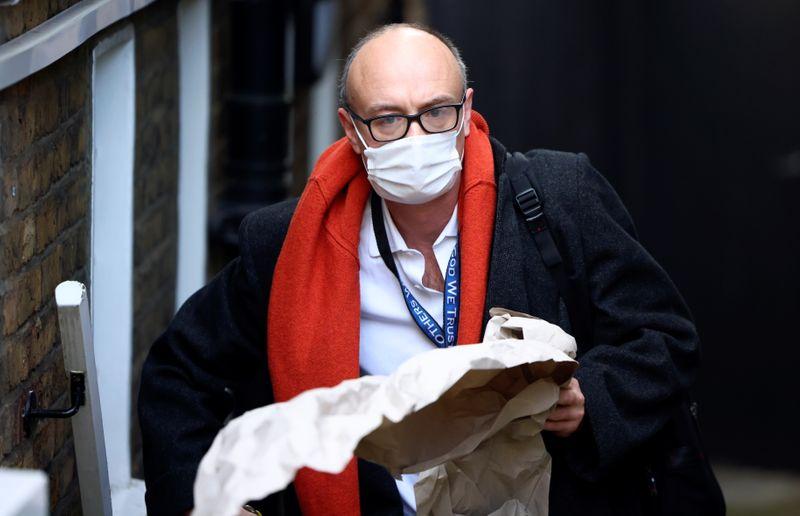 LONDON (Reuters) - Dominic Cummings, British Prime Minister Boris Johnson's most powerful adviser, will leave his post at the heart of Downing Street when Brexit is done at year-end, after an internal battle over who should be Johnson's chief of staff.

Cast, variously, as an anarchist, visionary, Britain's Rasputin or a political vandal, who is Cummings?

Below are some of his sides.

THE CARDINAL OF BREXIT

Cummings, alongside fellow campaigner Matthew Elliott, drove Vote Leave to victory in the 2016 referendum. He is credited with coining the central campaign slogan: "Take back control".

Behind his bluster, and notwithstanding his own Oxford degree, Cummings believes the elites of the West, and especially Britain, are out of touch with voters and have consistently let down their people while rescuing the fortunes of big business.

He scorns the accepted Westminster dress code of a suit and tie, wearing jeans and T-shirts to Johnson's Downing Street offices, often accompanied by an ill-fitting woollen hat.

Cummings also likes to scold reporters. In 2019, he told Reuters to stop asking about Brexit: "You guys should get outside London and go to talk to people who are not rich Remainers."

After Johnson won the top job in 2019, Cummings was brought into government as probably his most influential adviser.

He helped Johnson navigate the maze of Brexit and provoked parliament into stalling ratification of a Brexit deal by pushing Johnson to prorogue the legislature, setting the scene for Johnson's victory in the December 2019 election.

Johnson ended a more than two-year-long hung parliament, which had held up a Brexit treaty, by winning the biggest majority his party has achieved since Margaret Thatcher's 1987 re-election.

He refused to resign in May in response to an uproar after he drove 250 miles from London to access childcare when Britons were being told to stay at home to fight COVID-19. He said he had done nothing wrong and Johnson stood by his aide, though many lawmakers wanted him sacked.

Cummings said he undertook the trip after learning Johnson had tested positive for the new coronavirus. Cummings' wife was already ill and he feared that if he too fell ill, neither parent would be strong enough to care for their son.

He said he decided they should go and stay in an isolated cottage on his father's farm so that his 17-year-old niece could look after his son if necessary. Cummings fell ill while there, as did his son who briefly went to hospital.

Quizzed about a further, 30-mile drive he took with his wife and son from the family farm to a beauty spot, Barnard Castle, he said his eyesight had been affected by his illness and they wanted to check he would be able to undertake the journey back to London.

Cummings, 48, is cast by allies and enemies as a ruthless strategist who cares little for the conventions of traditional British politics. He is known as "Dom" to friends, who cast him as a visionary.

Cummings has openly questioned the competence of Britain's civil servants and scolded Conservative lawmakers for what he perceived as their stupidity and laziness.

He provoked a row inside Westminster last year when he sacked a 27-year-old adviser to then-finance minister Sajid Javid. The adviser, Sonia Khan, was escorted by armed police from Downing Street without Javid's knowledge.

Cummings studied under eminent Oxford University historian Norman Stone and graduated with a 'first' - the top degree class awarded at British universities. He likes to pepper his eclectic writings with cultural references.

"We need leaders with an understanding of Thucydides and statistical modelling, who have read The Brothers Karamazov and The Quark and the Jaguar, who can feel Kipling’s Kim and succeed in Tetlock’s Good Judgment Project," he once wrote.

"An Odyssean education would focus on humans’ biggest and most important problems and explain connections between them to train synthesisers."

After leaving university, Cummings went to Russia for three years where he helped set up an airline in Samara. It failed.