KABUL (Reuters) - A U.S. drone strike intended to hit an Islamic State (IS) hideout in Afghanistan killed at least 30 civilians resting after a day's labour in the fields, Afghan officials said on Thursday. Afghanistan's Defence Ministry and a senior U.S official in Kabul confirmed the drone strike but did not share details of civilian casualties 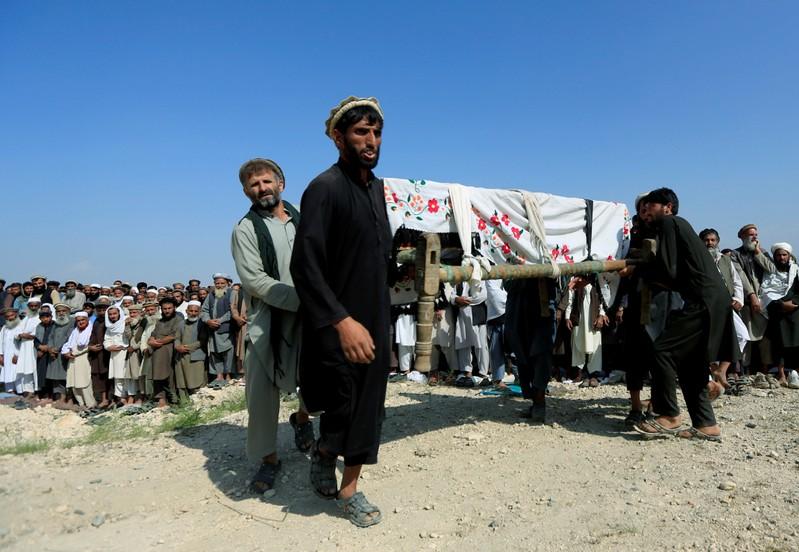 KABUL (Reuters) - A U.S. drone strike intended to hit an Islamic State (IS) hideout in Afghanistan killed at least 30 civilians resting after a day's labour in the fields, Afghan officials said on Thursday.

Afghanistan's Defence Ministry and a senior U.S official in Kabul confirmed the drone strike but did not share details of civilian casualties.

According to the United Nations, at least 3,812 Afghan civilians were killed or wounded in the first half of 2019 in the war against militant groups, with a big increase in the number of casualties caused by government and foreign forces.

Air strikes by U.S. and government forces killed 363 people and injured 156 others, and of those casualties 150 were children, according to the U.N. report https://unama.unmissions.org/protection-of-civilians-reports. Of those 519 casualties, just over four of every five were caused by the international forces.

The United States under the counter-terrorism operation in Afghanistan continues to conduct air strikes against the Islamist Taliban insurgents and the Islamic State fighters.

Here are some of the heaviest civilian losses from air strikes in Afghanistan in recent years, although Afghan forces and their international allies often dispute accounts from local officials and residents.

Air strikes in western Afghanistan destroyed a number of Taliban drug labs, killing at least 45 civilians, according to reports from local officials that were rejected by the Afghan government.

The Afghan defence ministry said coalition air strikes in three locations in the western province of Farah destroyed 68 Taliban drug labs and killed 150 insurgents, as part of an air campaign aimed at cutting off one of the movement's key sources of revenues.

But many of those killed were civilians working in the labs, said Abdul Ghafoor Mujahid, the governor of Bakwa district where the attacks took place. Some 18 Taliban fighters also died, and several civilians in neighbouring houses were wounded, he said.

At least 20 Afghan civilians, including 12 children - were killed in an air strike targeting a Taliban commander in the eastern province of Kunar, local officials said.

A spokeswoman for the U.S.-led NATO Resolute Support mission denied the civilian deaths, though she said some civilians were wounded.

U.S. air strikes killed at least 30 Afghan civilians, including 16 children, in the Afghan province of Helmand, officials and residents of the area said.

Afghan government forces and U.S. advisers came under fire from Taliban fighters in a compound in Garmsir district, according to a Resolute Support statement. Ground forces were not aware of any civilians in or near the compound when they called in an air strike, the statement said.

A U.S. air strike killed more than 30 Afghan civilians, including children and elderly men, and wounded dozens more in the northern province of Kunduz, the provincial governor said at the time.

The air strikes were called in to protect Afghan and U.S. forces during a raid on suspected Taliban militants outside Kunduz city. The U.S. military investigated accusations it had killed civilians, finding the following January that 33 were killed and 27 injured.

An air strike carried out by U.S.-led coalition forces killed 42 medical staff and patients, including three children, at a hospital run by Medecins Sans Frontieres (MSF) in the northern Afghan city of Kunduz, said the aid group.

An American military probe concluded that the attack was the result of human error and equipment failure, among other factors, and at least 16 U.S. military personnel were disciplined for their role.