Explainer: What we know about Trump's Mideast peace plan 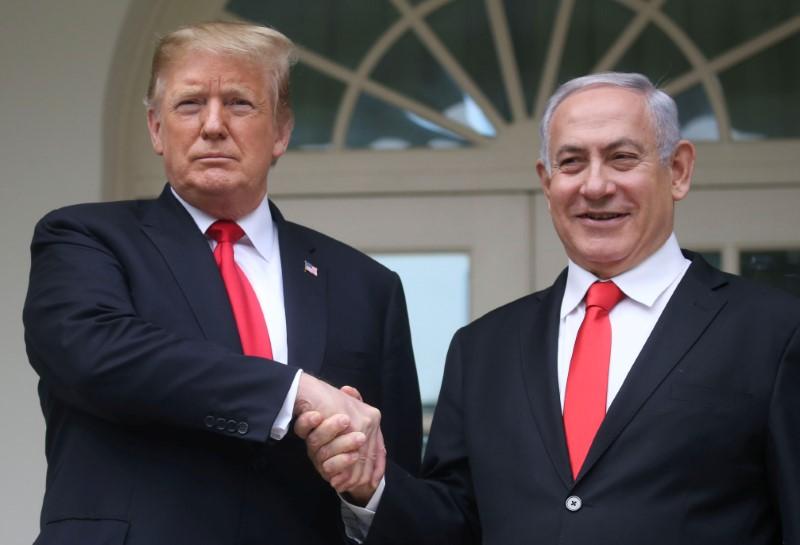 JERUSALEM (Reuters) - More than two years after U.S. President Donald Trump first proposed a plan to revive the Israeli-Palestinian peace process, it lies stalled half in and half out of the starting blocks.

U.S. Vice President Mike Pence on Thursday announced that Israeli Prime Minister Benjamin Netanyahu and his main domestic rival, Benny Gantz, had been invited to Washington next week to discuss "the prospect of peace".

There was no mention of the Palestinians, who swiftly warned against any American move violating international law.

Little has so far been revealed about the plan which will have to address issues that have defied decades of efforts by previous peacemakers.

- The status of Jerusalem – which includes sites sacred to Judaism, Islam and Christianity

- The Palestinian demand for statehood, and an end to Israel's occupation of Palestinian territory.

- Finding a solution to the plight of millions of Palestinian refugees.

- Arrangements to share scarce natural resources, such as water.

Why revive the plan now?

U.S.-Israeli relations are at a zenith, with Trump and Netanyahu the closest of allies.

Both men face domestic troubles: Trump will likely be accused of trying to deflect attention away from his impeachment trial and Netanyahu was indicted on corruption charges in November, throwing him into legal limbo.

And both face election campaigns – Trump for re-election, and Netanyahu because he failed to put together a governing coalition in two elections last year.

What do we know about the plan?

Palestinian and Arab sources who have been briefed on the draft plan fear that it seeks to bribe Palestinians into accepting Israeli occupation, a prelude to Israel annexing about half of the West Bank.

Perhaps reflecting the business background of Trump and his son-in-law, Jared Kushner, the plan's principal author, the first phase of the peace proposal was launched at an economic conference in Bahrain last June.

It called for a $50 billion investment fund to boost the Palestinian and neighbouring Arab state economies. Kushner said he believed a deal could unlock prosperity for the Palestinians, and security for Israel.

What are the plan's chances?

Expectations are low. The last peace talks between Israelis and Palestinians collapsed in 2014.

The elephant in the room is the two-state solution - the long-standing international formula to bring about peace by creating an independent Palestinian state living side-by-side with Israel.

The United Nations and most nations around the world back the two-state solution, and it has underpinned every peace plan for decades.

But the Trump administration has consistently refused to back the two-state solution. And in November it reversed decades of U.S. policy, when Secretary of State Mike Pompeo announced that the U.S. no longer viewed Israel’s settlements on West Bank land as “inconsistent with international law”.

Palestinians and most of the international community view the settlements as illegal under international law. Israel disputes this, citing historical, biblical and political ties to the land, as well as its security needs.

Netanyahu has announced that he intends to annex all the settlements as well as most of the Jordan Valley, the strategic and fertile easternmost strip of the West Bank.

Palestinians argue that the Jordan Valley, nearly 30 per cent of the West Bank, would be a vital part of their future state, as the breadbasket of the West Bank and its external border with Jordan.

Palestinian President Mahmoud Abbas has said Washington can no longer be regarded as a mediator in any peace talks with Israel.

Since his election, Trump has made a series of moves that have delighted Israel but infuriated Palestinians. These include his 2017 decision to recognise Jerusalem as the capital of Israel, and to move the U.S. Embassy from Tel Aviv to Jerusalem.

The Palestinians fear the Trump plan will dash their hopes for an independent state in the West Bank, east Jerusalem and the Gaza Strip - territories Israel captured in 1967.

Abbas, whose Palestinian Authority exercises limited self-rule in the West Bank, has refused to engage politically with the Trump administration.